I've gotten just a bit of sewing done lately - nothing much to brag about.  Well, maybe one thing I'll brag about....I've gotten one of my projects for the See You In September Blog Hop done!  And this is July!  And it's a gingham one!  I can't show you now, though.  That's against the rules.  But in September....

I finished a couple of candle/mug mats/rugs.  They're really candle mats but I use them for mug rugs.  The first is for Valentine's Day. 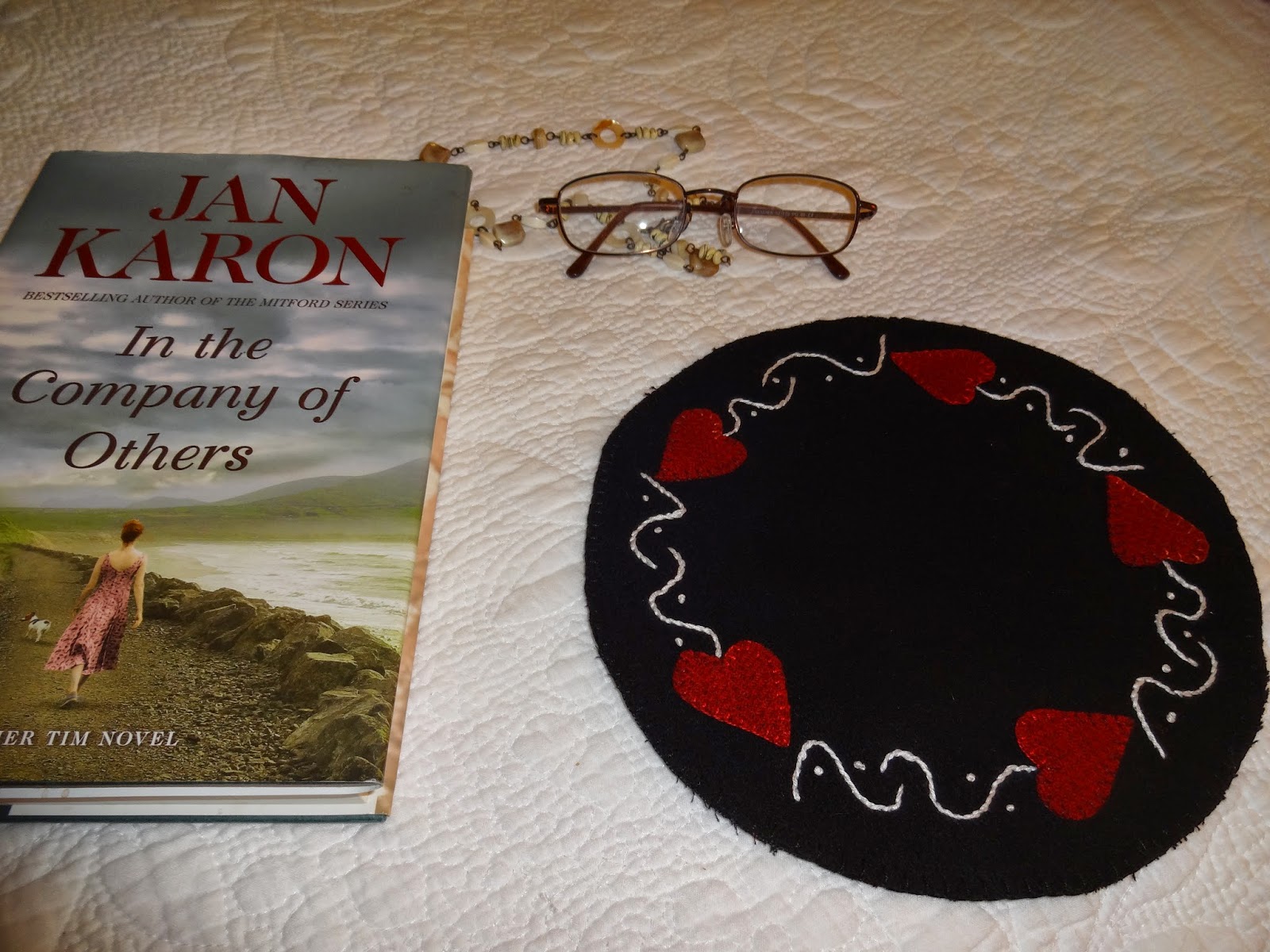 And this one is probably intended for April....showers, you know.  But we've gotten a lot of rain this summer so I can use it any time! 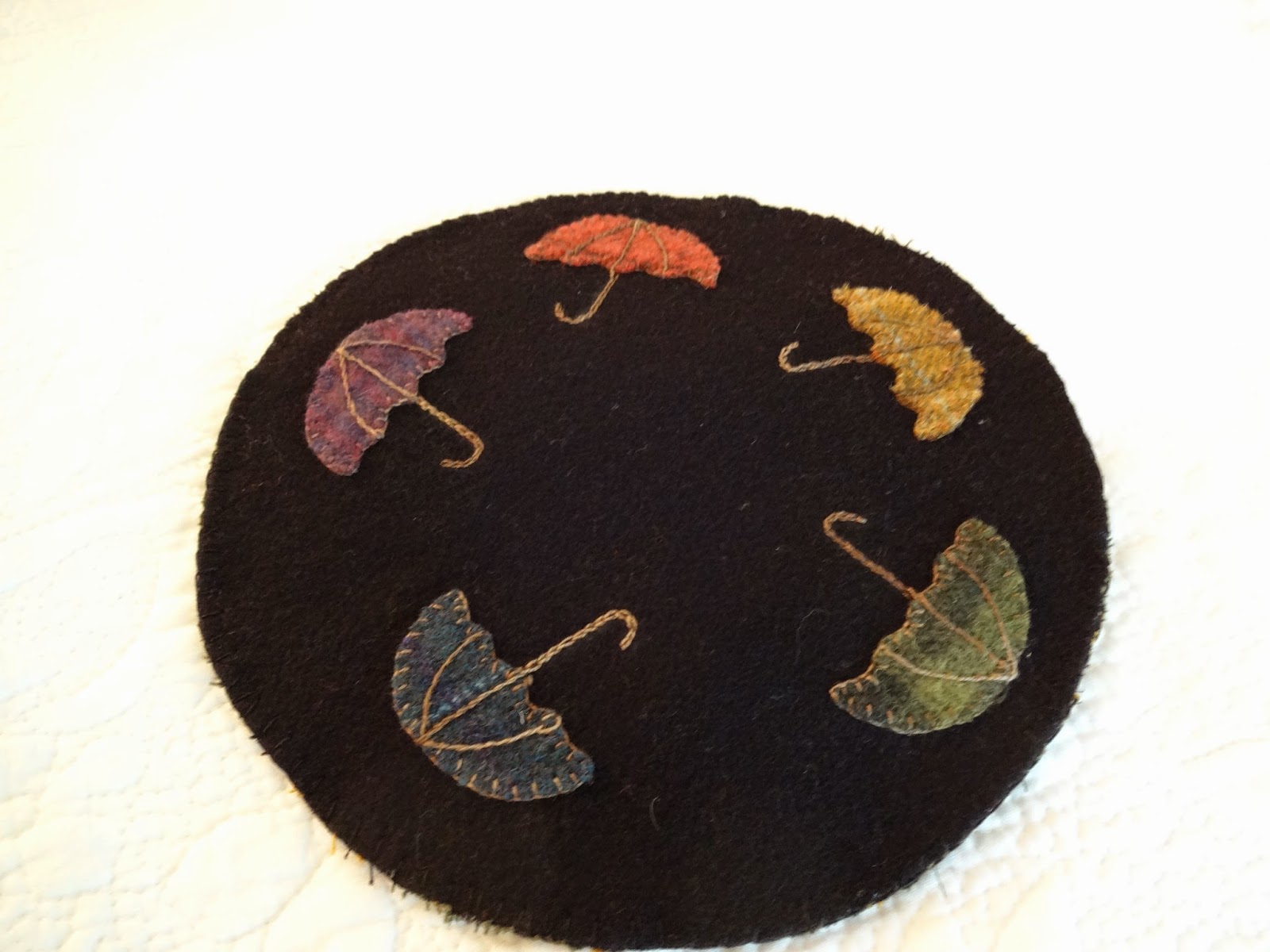 And then there's this Christmas quilt - I know several people who love cats so this one will be well loved I'm sure! 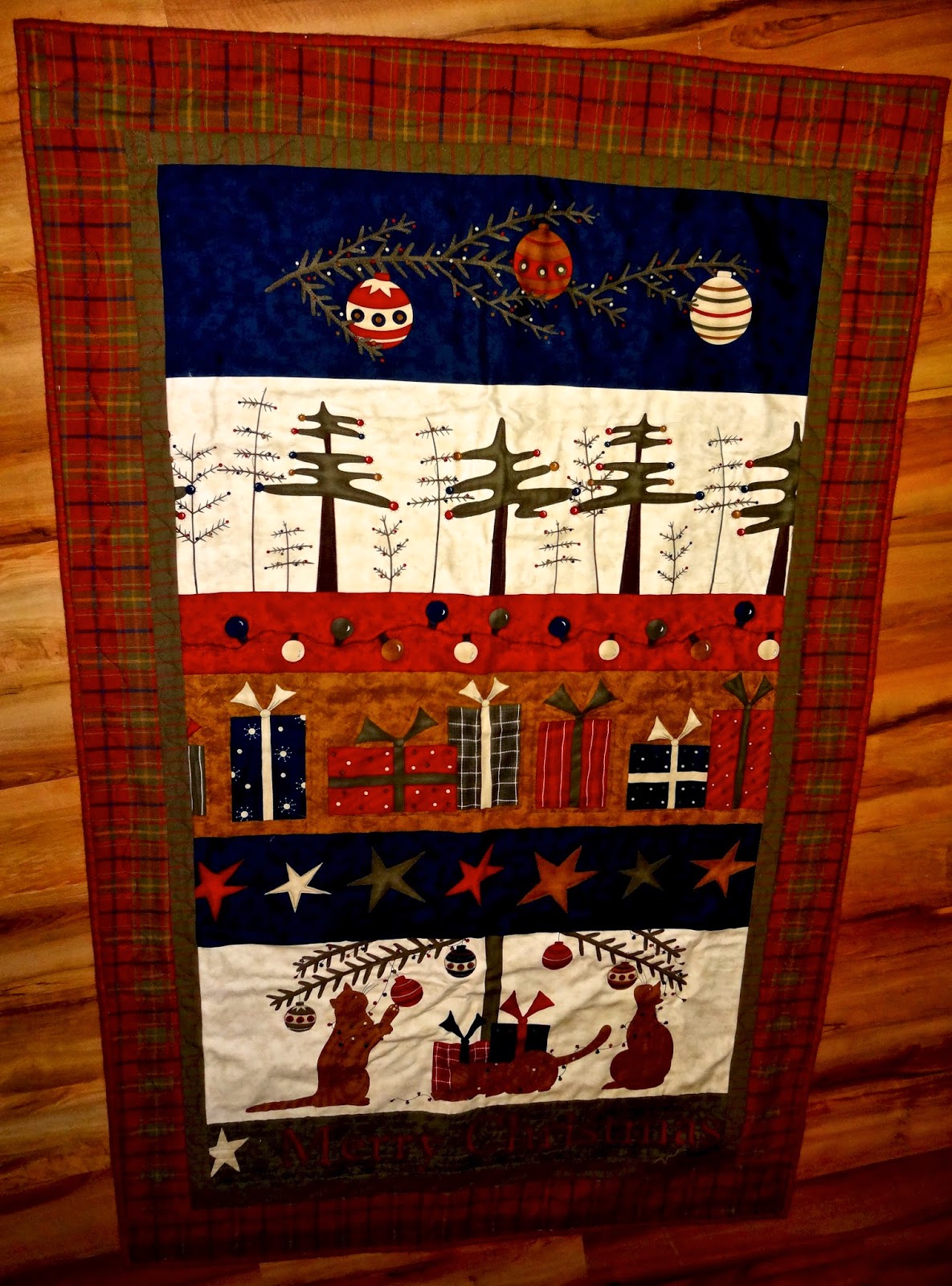 This was a panel I must have bought 15 years ago or so...maybe 10 but I bet closer to 15!  I added borders and did a little quilting. 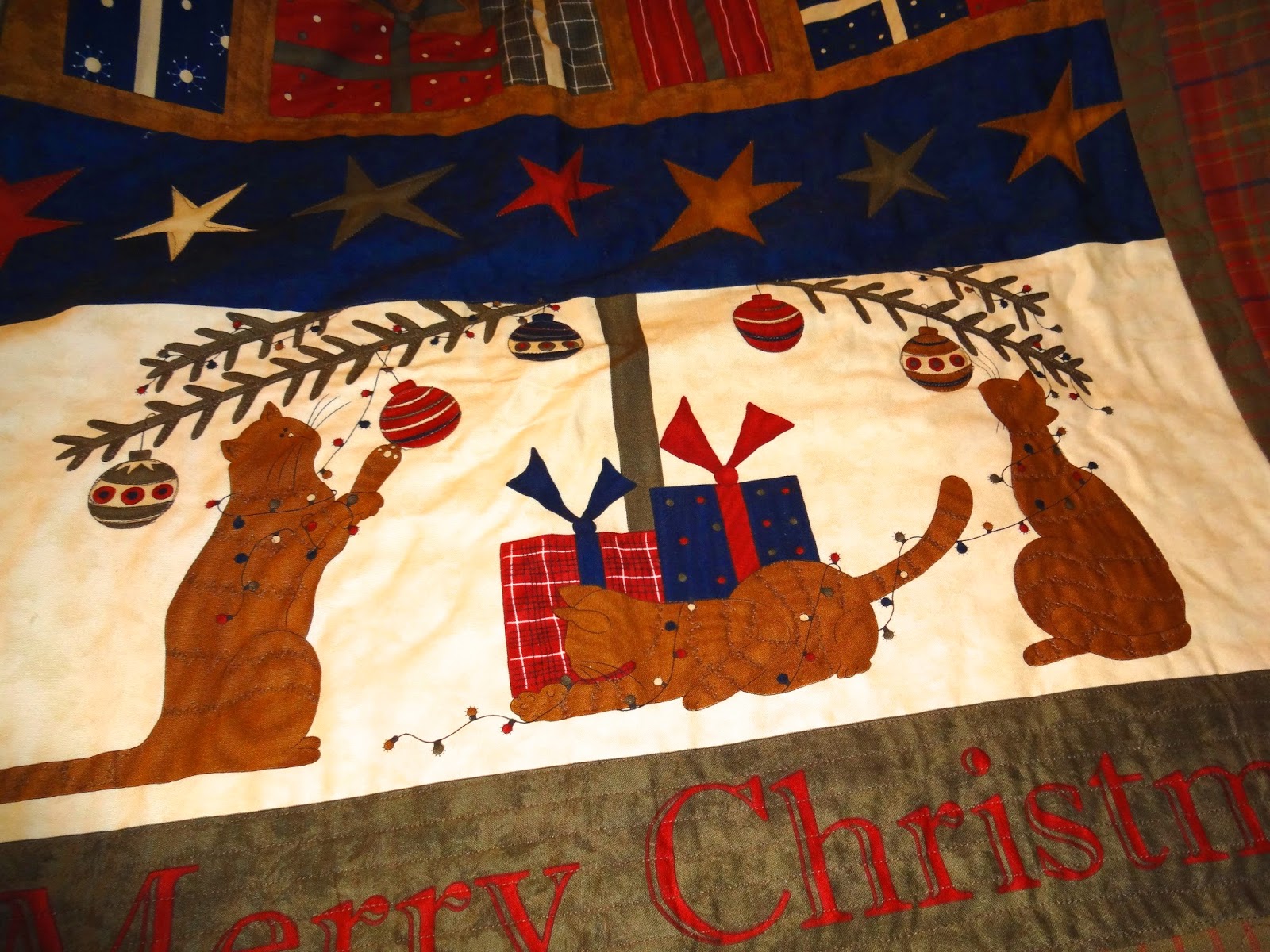 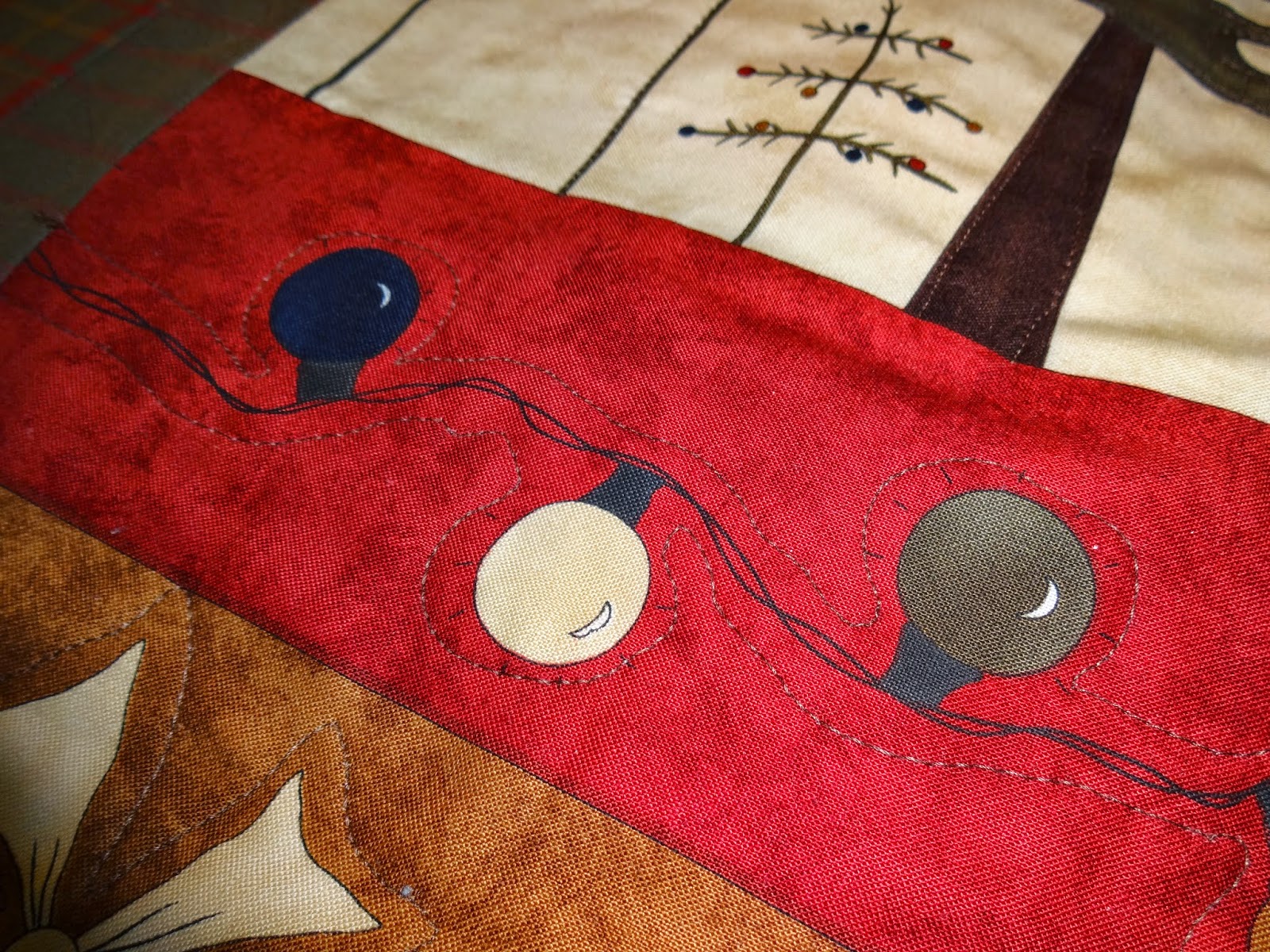 I did more quilting than you will notice - or at least more than I notice.  I wanted it to be simple to go along with the primitive style of the panel so the quilting is mostly hidden in the trees and cats and presents.

Is anybody else getting any winter stitching done?

Posted by StitchinByTheLake at 12:00 AM 24 comments

It's summer time and the livin' is easy....well, not really, but it sure is fun.  I've been AWOL from the blog for a bit but I have good excuses.  First my baby brother and his wife came to see me, with baby being relative, of course.  (I had my hair all cut off for the summer - love it! cause I just wash it and go!) 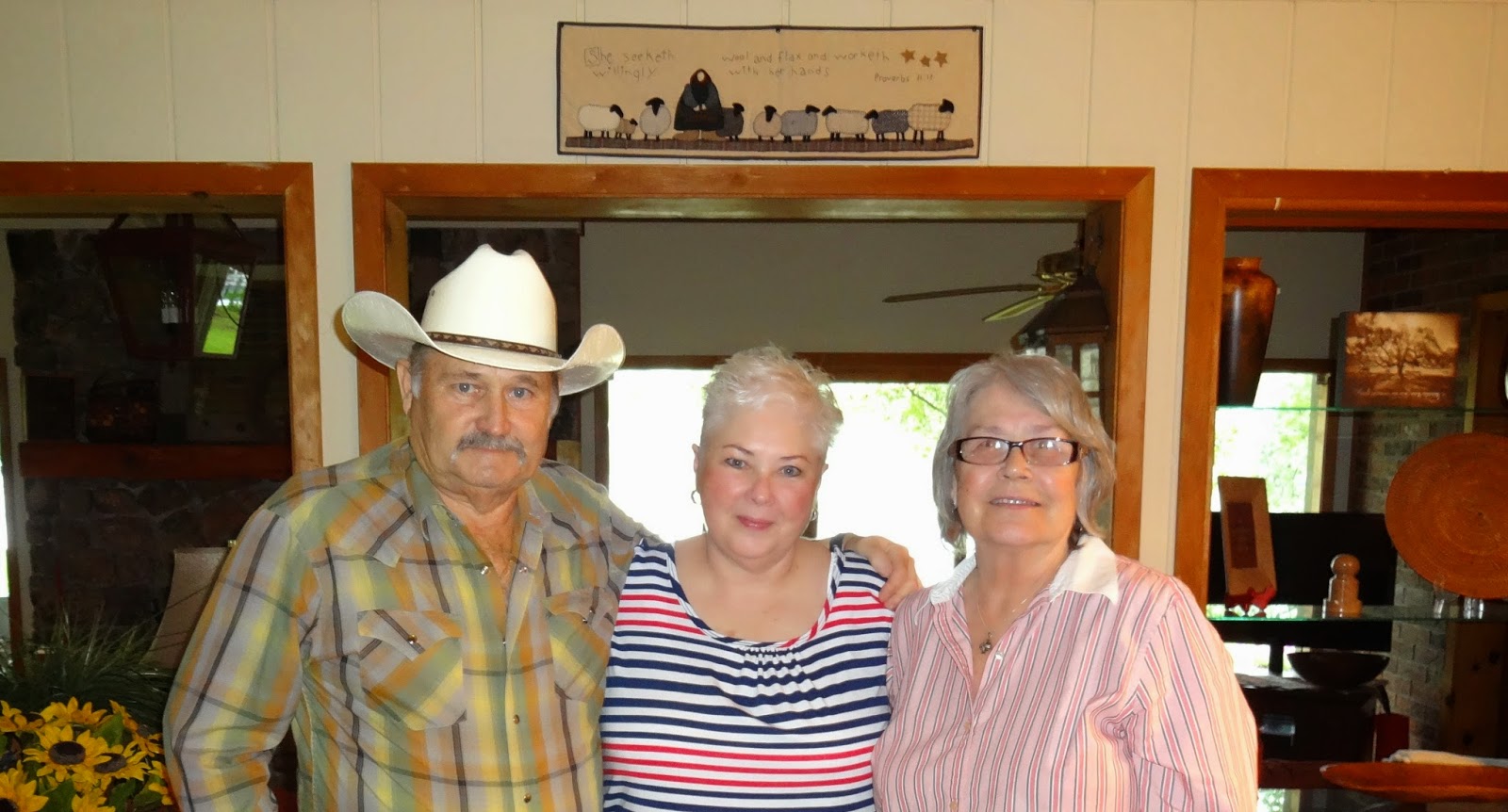 He's a retired policeman....looks like one too, don't you think?  He was a deputy sheriff in Texas for a while too and he reminds me of some of those old cowboy stories.  :)  He did lots of things when he was working - undercover, drug unit, had a dog for a while, stuff I don't really want to know about.  Once when we were both about 30 years younger he came to see me and I didn't recognize him when he came to the door - he was undercover and had long black hair and a long, bushy black beard and was dressed in dirty old clothes...scared me to death!

I made a quick red, white and blue table runner to send home with my sister-in-law. 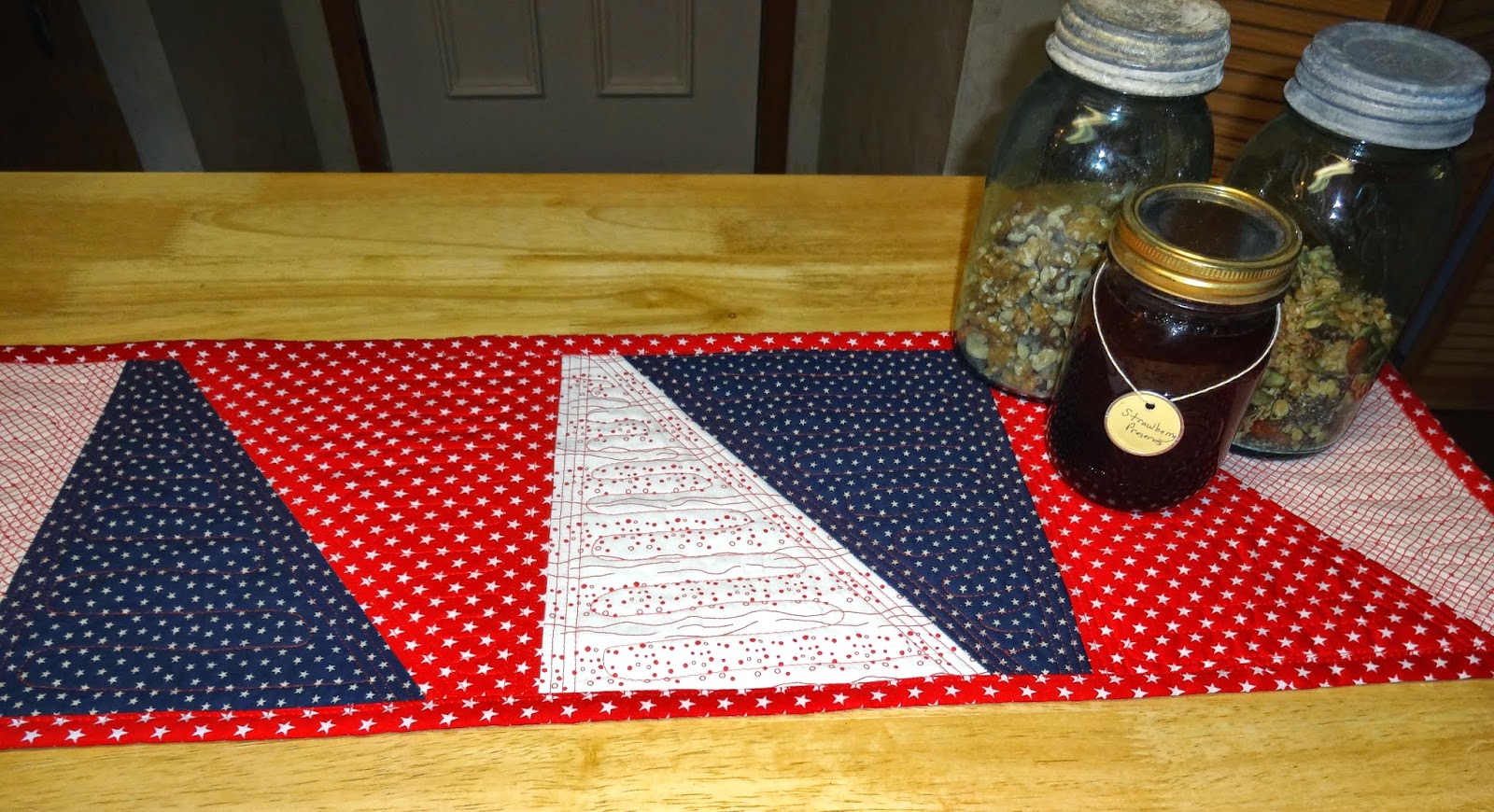 And then my sister came to see me for a bit of R&R. 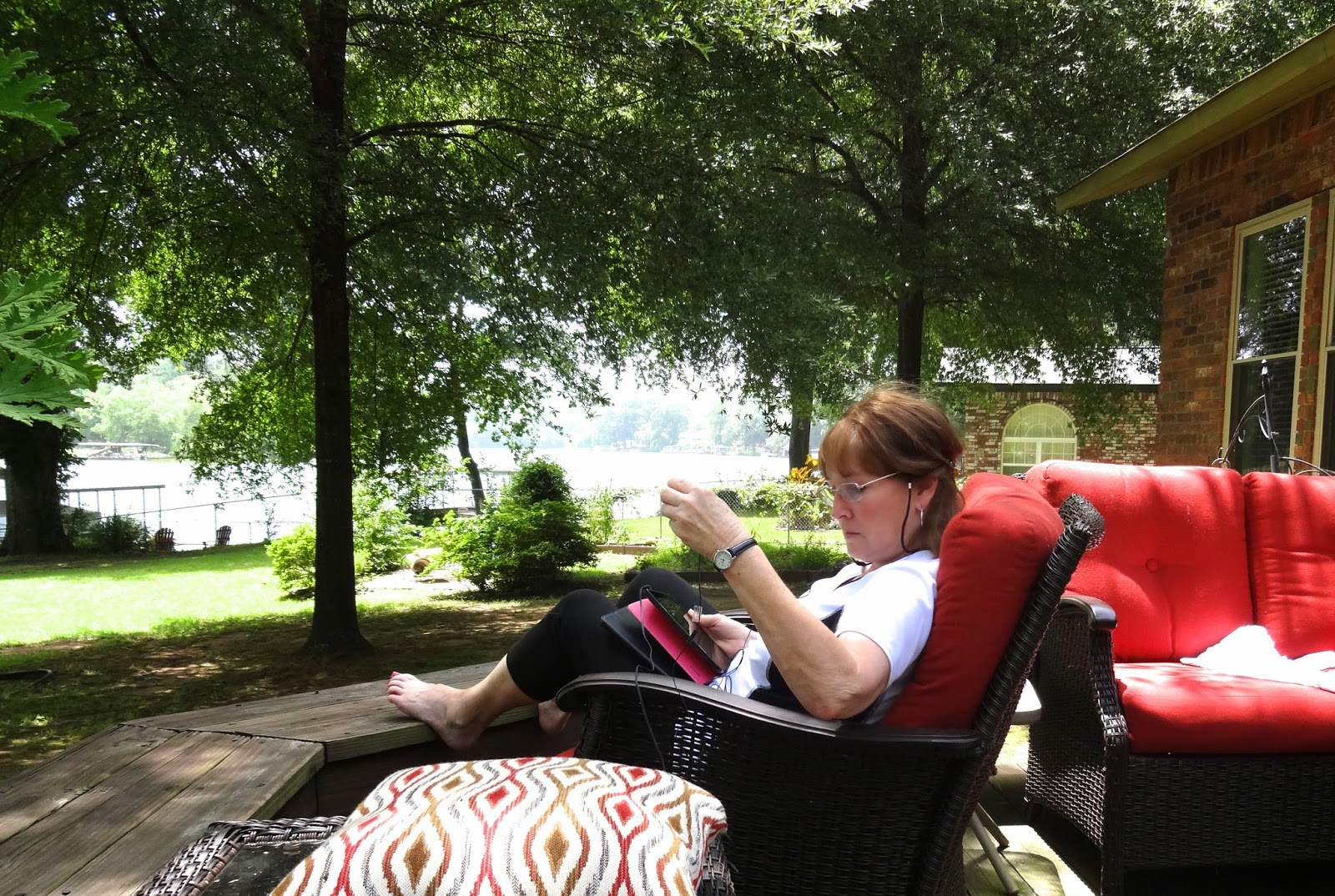 She had just spent 8 weeks with her youngest daughter and family after her daughter had some very serious complications with childbirth.  Mother and son are doing great now but I know she panicked when her mama left!  Or maybe that's just me.  I would have panicked!
She sent me three chicken feed sacks some time ago so before she got here I made market bags out of them - two for her and one for my oldest daughter.  They both love chickens...my daughter just has a few but my sister has almost 30! 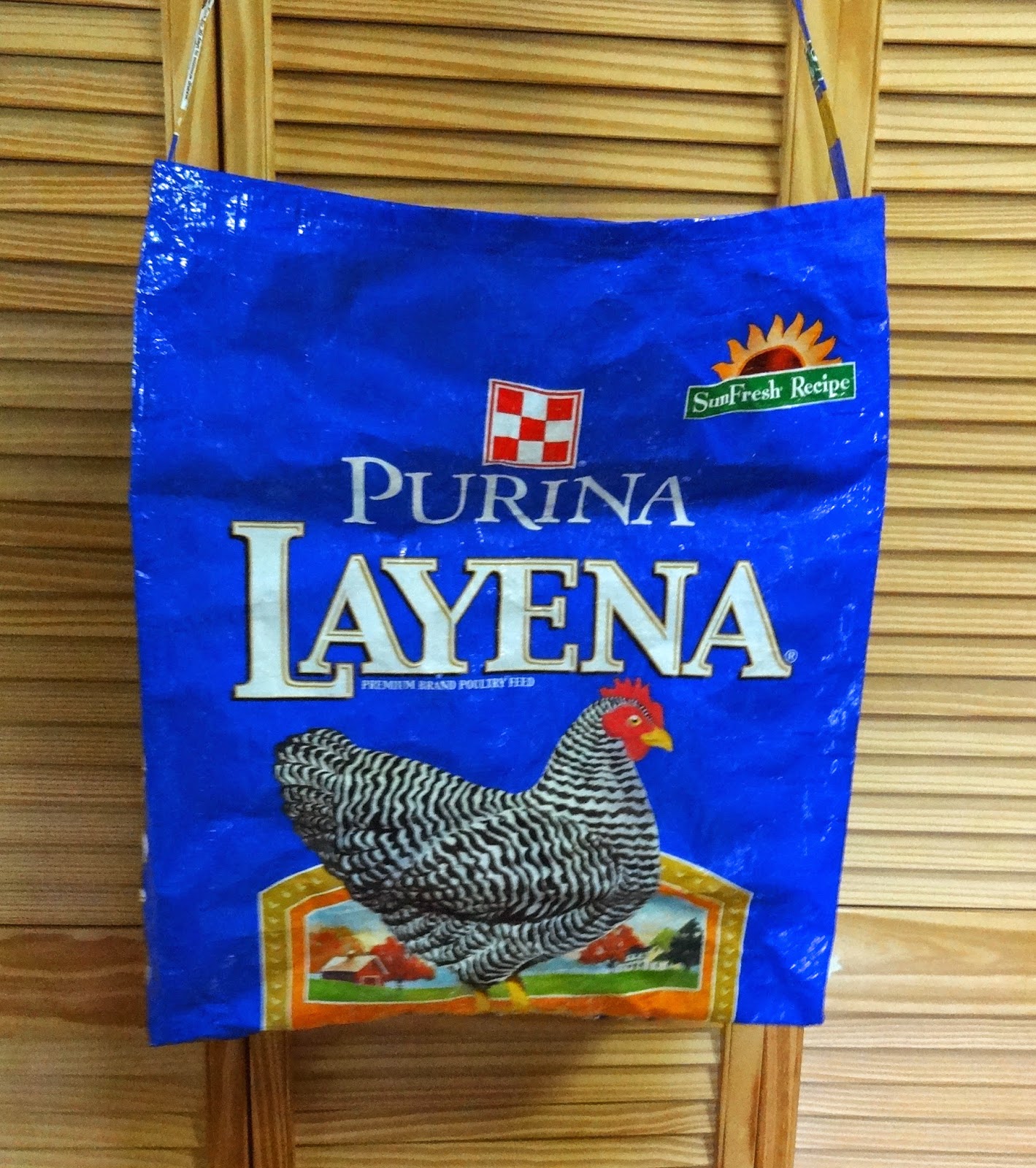 After she left we bought a new umbrella to put behind that couch - it's mostly shaded on the deck but midday to mid-afternoon the sun hits right there.  I love that the outside is the same color as the cushions but the inside is floral! 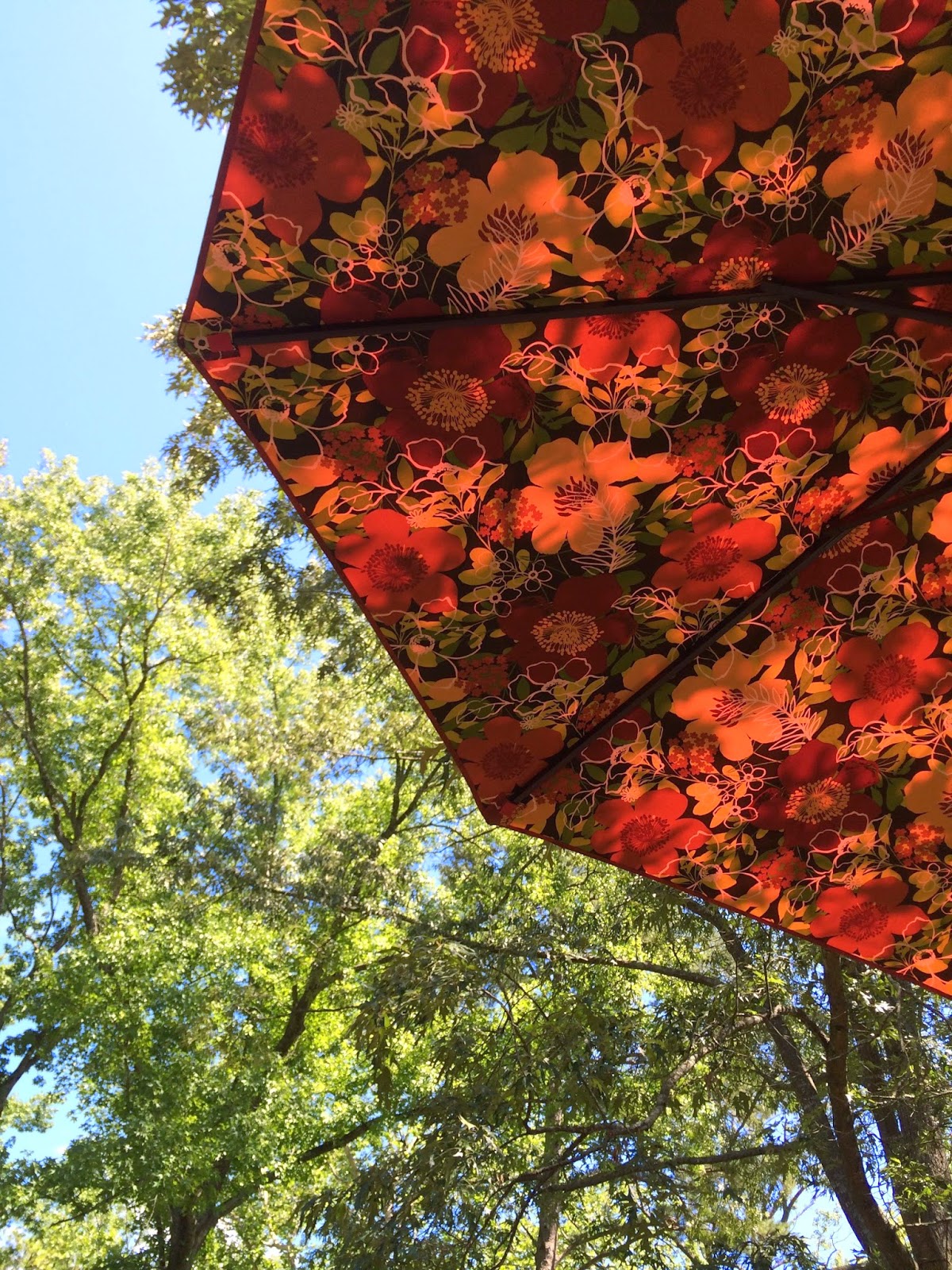 Then it was time for the Fourth of July and all my kids and most of the grandkids were in and out from Tuesday night to Saturday night.  They had some water time, even though the water is still cold here at my house. 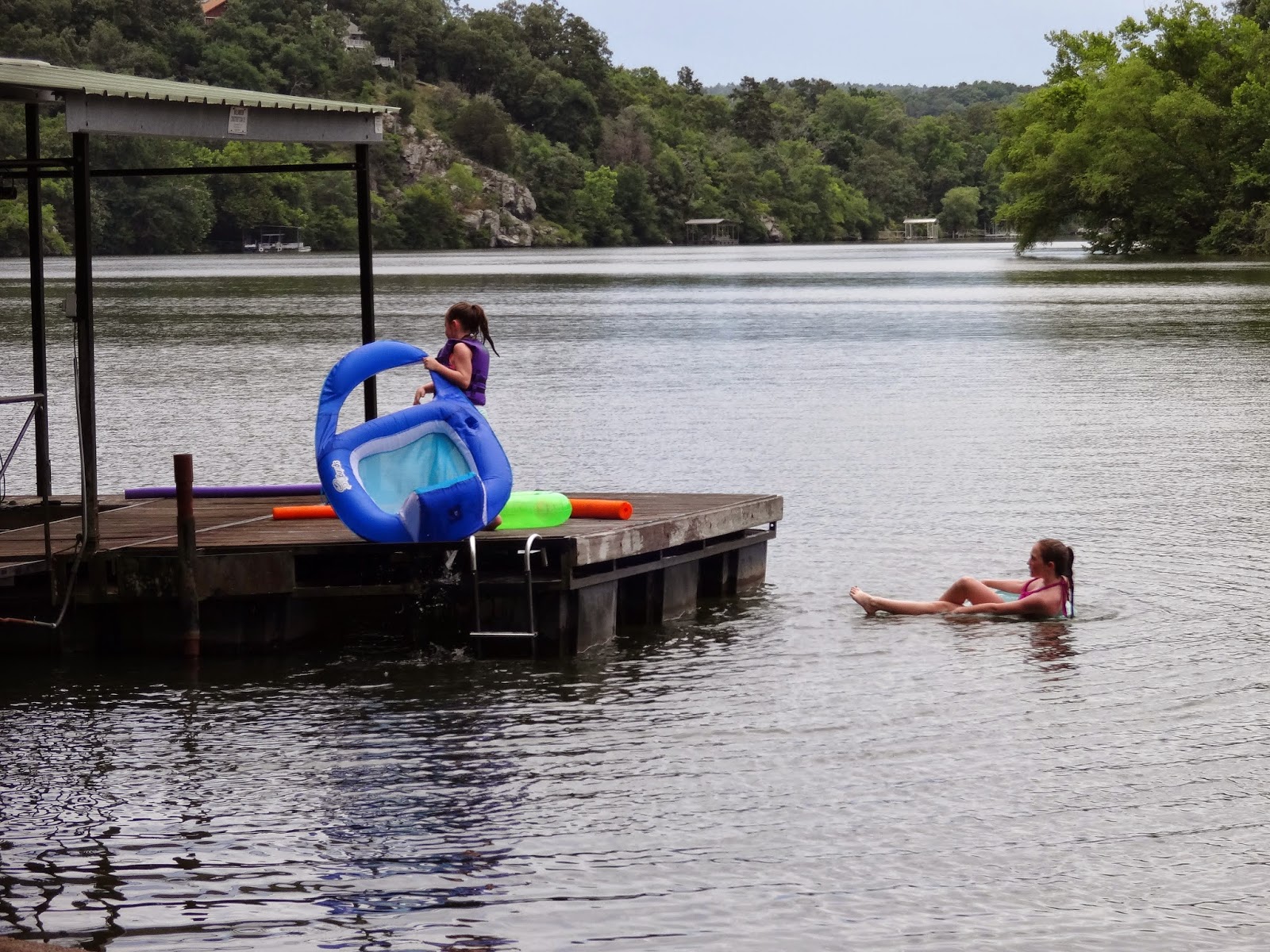 There was a lot of playing inside the house too - my poor living room! 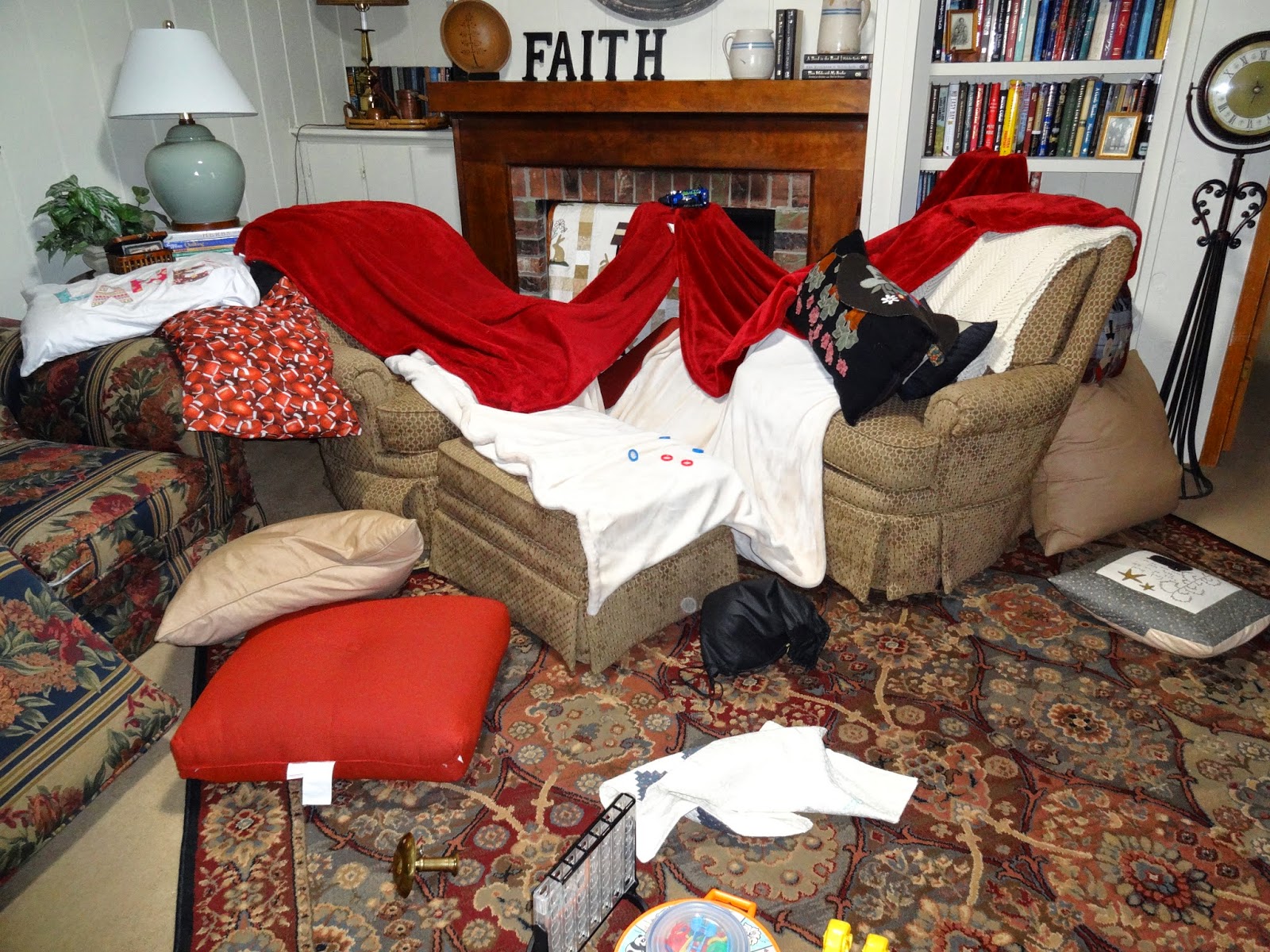 Cushions, blankets, pillows....all went into the making of this tent!  And games were kept nearby for dragging under there with them.  :)

One of the grandchildren was born on the Fourth of July so we had a double celebration.  She got a Reese's Peanut Butter Cup Ice Cream Cake - sinful cake for sure. 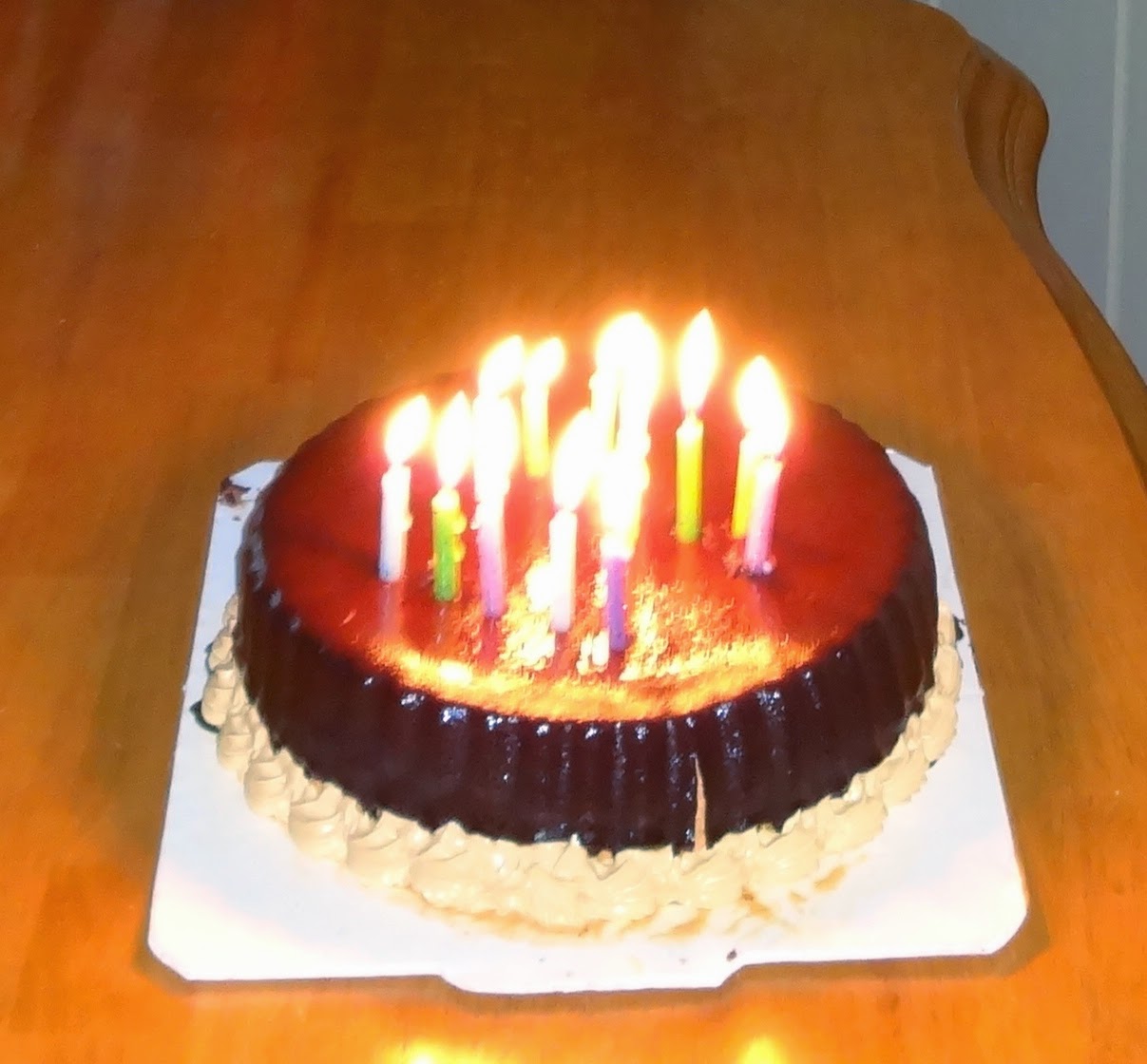 We went into town to a big community gathering to see the fireworks.  There were children playing everywhere. 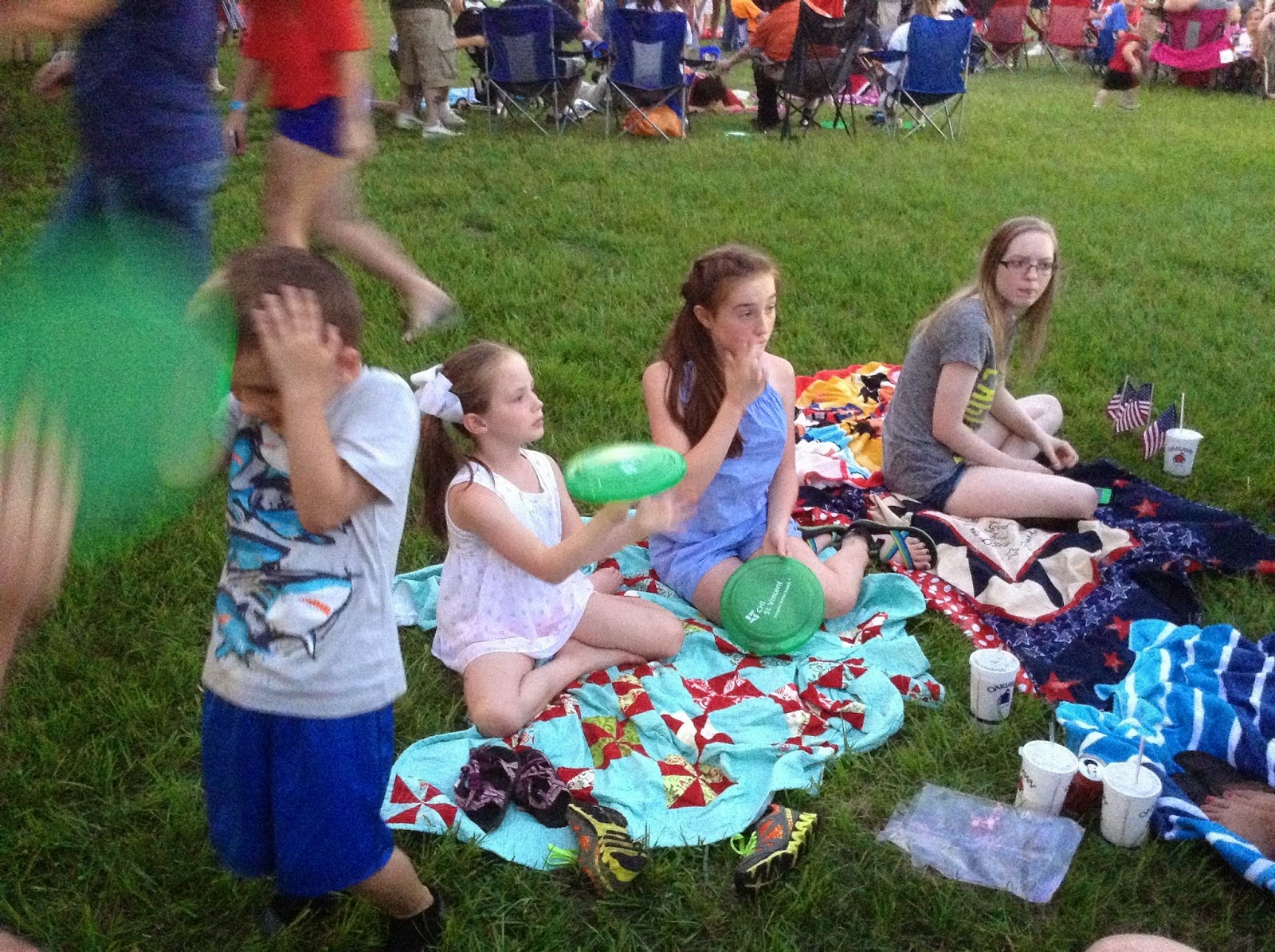 Even the big kids played! 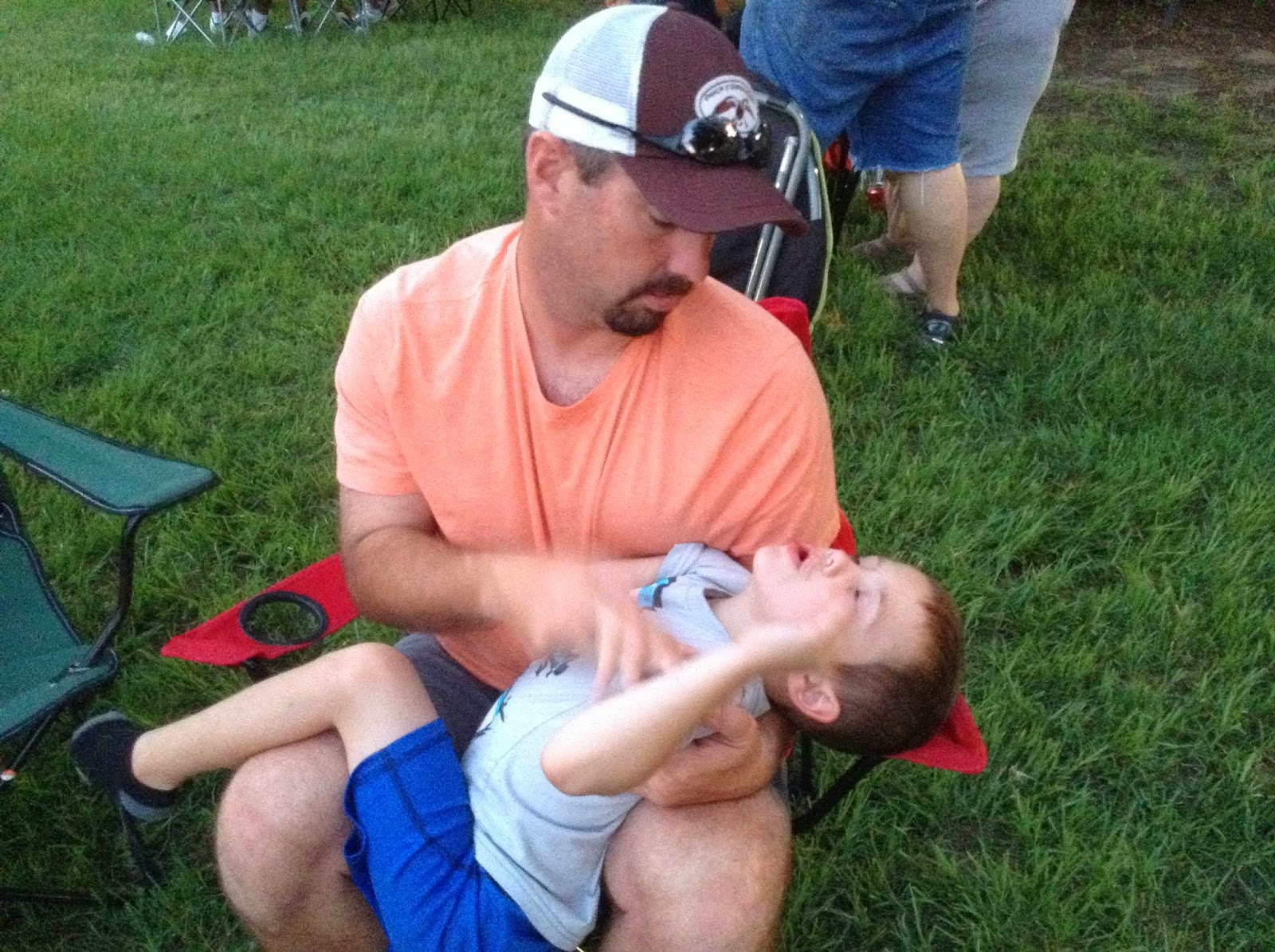 And then there were fireworks! 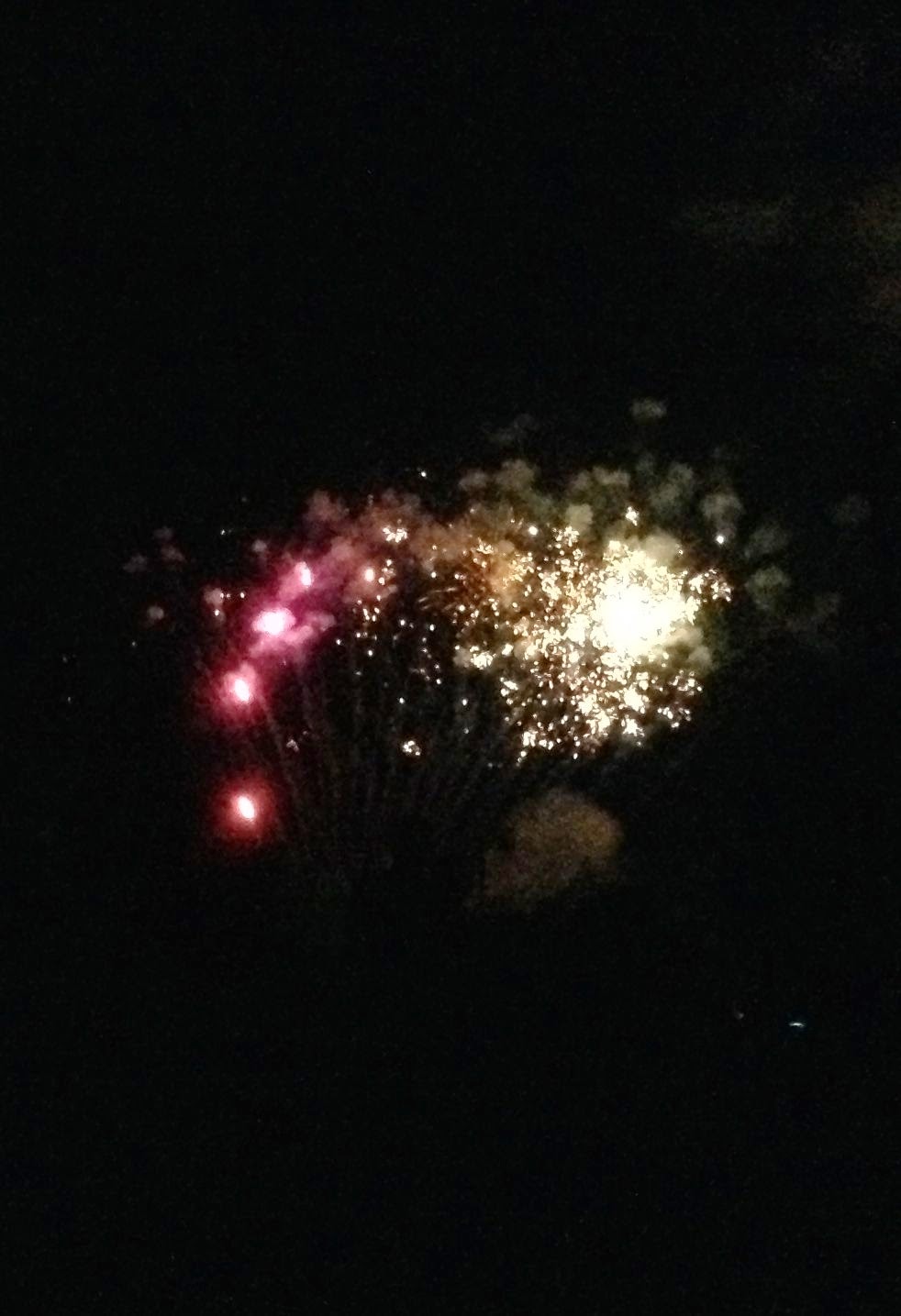 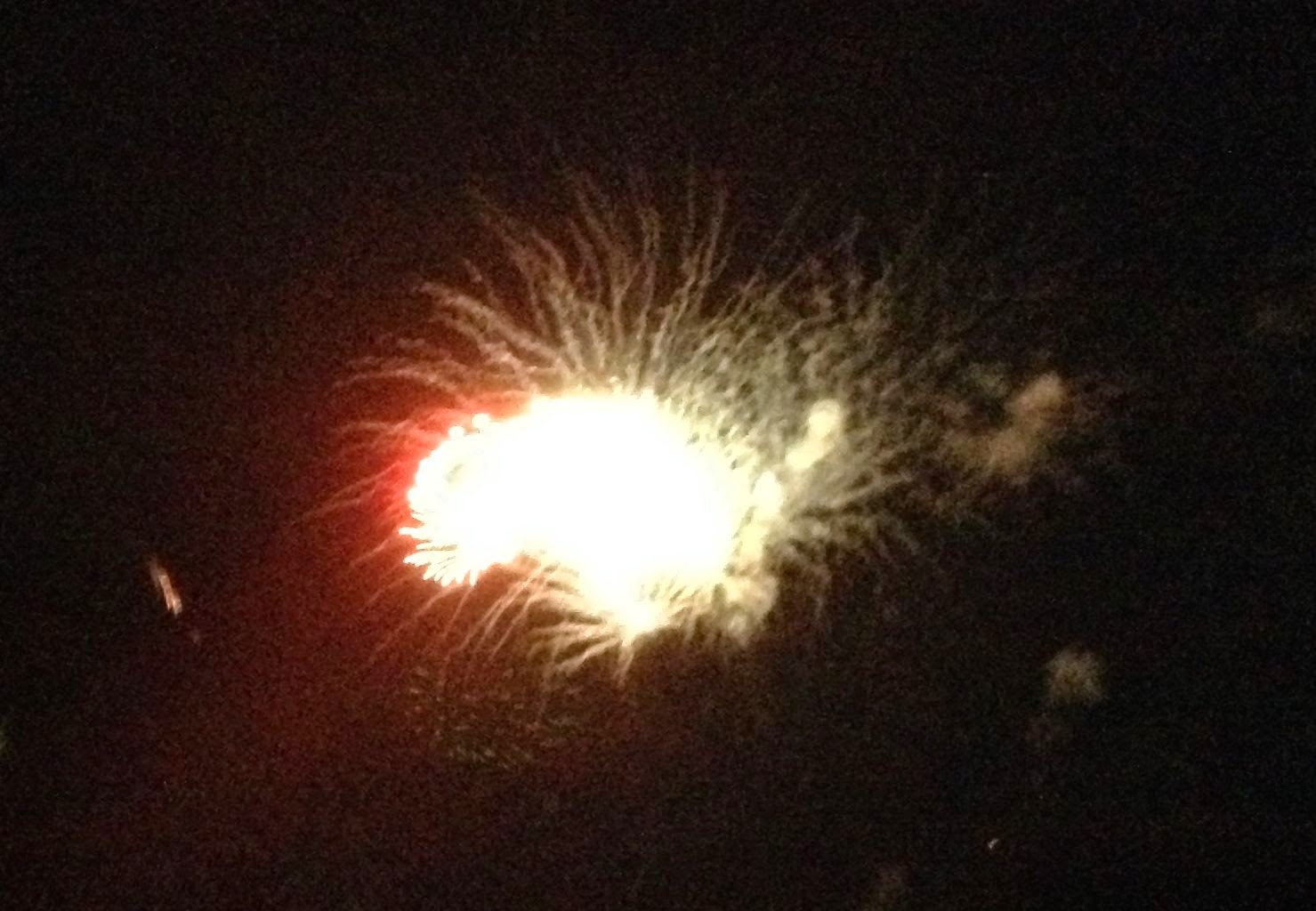 The weather was a pure blessing - in the 70s in the daytime with a nice breeze.  I even had to cover up at the fireworks!

And before the weekend was over a wonderful sweet friend was passing through and I got to visit with her for a few minutes! 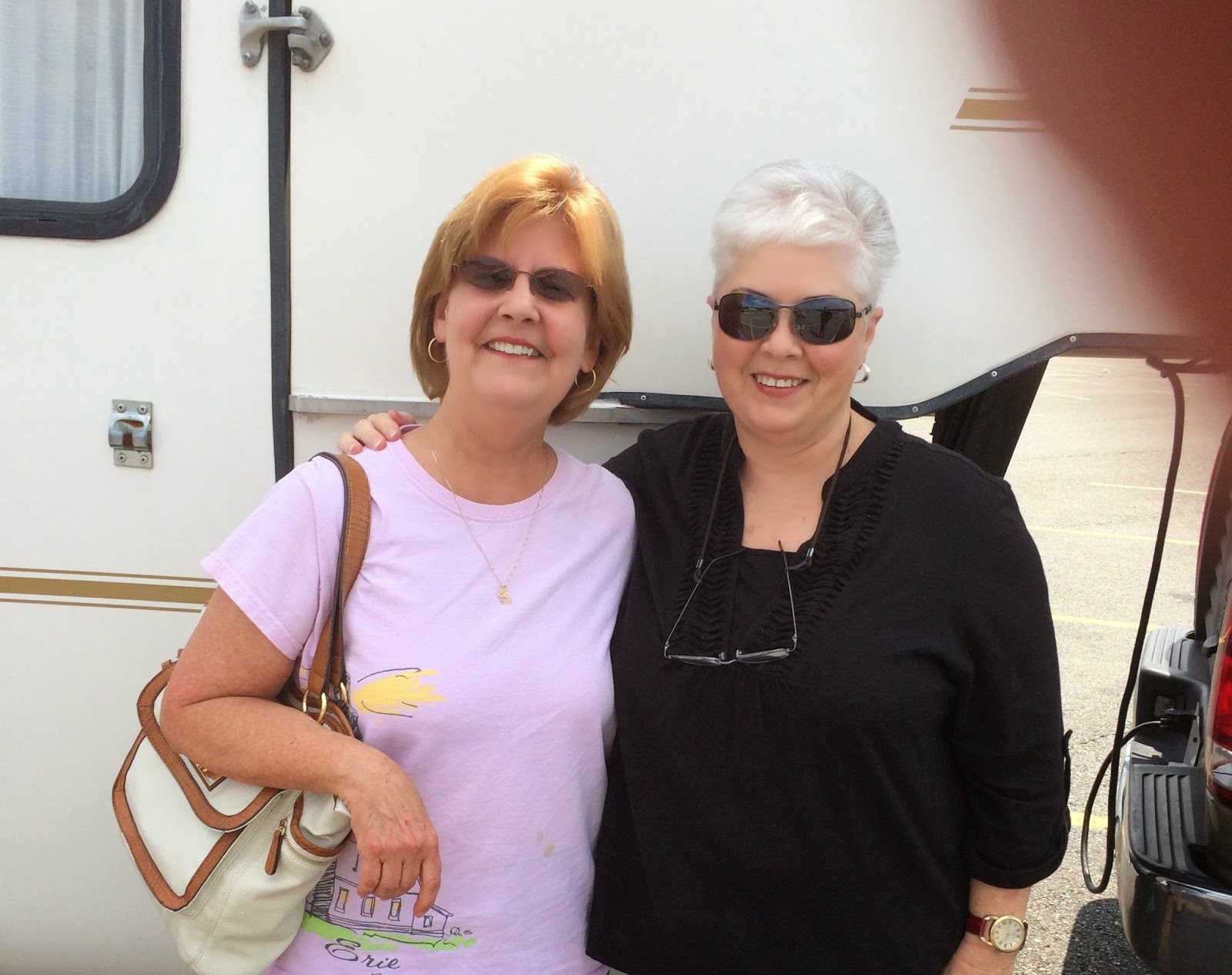 Sometimes I think we get so wrapped up in our day-to-day lives that we forget to count our blessings.  But this holiday always makes me thankful - for freedom, for the men and women who fought and sometimes died to give me that freedom, for family and for friends, for the food we take for granted and the homes that shelter us.  My heart and my cup overfloweth!

Posted by StitchinByTheLake at 3:07 PM 23 comments