Is It Easter Yet?

Easy, cute, fun, fast....door decoration, pillow, what else could you do with this?  You could make smaller ones,  or a giant one, one for each child, or grandchild.  They're addicting.  I must make more. 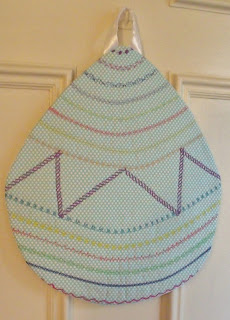 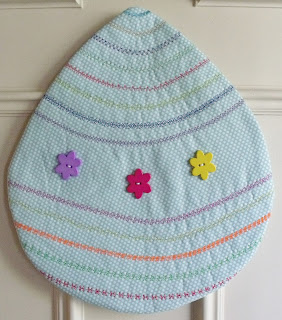 Posted by StitchinByTheLake at 12:01 AM 13 comments

Seriously? Because We're Out Of Suet?

I'm a novice at uploading videos but if the picture doesn't show up click on the arrow on the left.  Wish I could get sound on there - it sounds like a hammer hitting the glass!

Posted by StitchinByTheLake at 6:00 AM 26 comments

For The Love Of Spring!

I've mentioned before that I'm making the Harrington and Hannah blocks that are part of the free BOM being given away by Michelle at The Raspberry Rabbits.  I love her rabbits and her patterns!  If you haven't seen them then be sure to take a look; I know you'll fall in love with those bunnies.  :)

Michelle also designs patterns and makes small quilts using her folk art fusion technique.  Her latest pattern, For The Love of Spring, really caught my eye when she showed it on her blog.  Last week she sent me the pattern to test for her (it has nothing to do with the fact that I drooled when I saw it) - oh my goodness, how fun is that!  I was so excited that she sent it one day and I made it the next.  :)  Yes, it really was that fast.  An afternoon and it was done!  I love the primitive look of these flowers. 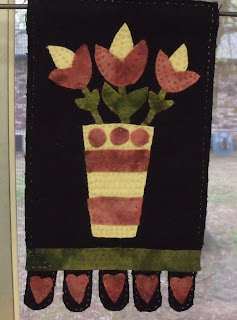 This is a small piece and except for the background I literally made it from scraps! 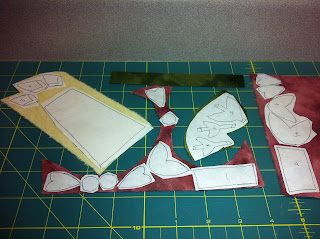 I could tell from the pattern that Michelle is very generous with the fabric in her kits because I used far less than she calls for.  And I loved the fact that her directions were completely clear and in exactly the right order for assembling everything very quickly.  And another nice part is that the pattern comes with both the wool instructions and embroidery instructions - two for the price of one.

She's not paying me anything to say this so I can be completely honest when I say that I've ordered from Michelle before and been completely pleased with her service.  I love the Valdani threads she carries and her service is super quick.  Take a look at her website;  you'll want it all!

Posted by StitchinByTheLake at 8:00 AM 11 comments

Last week Bethany House Publishers sent me a new book to read and review - In Too Deep by Mary Connealy. 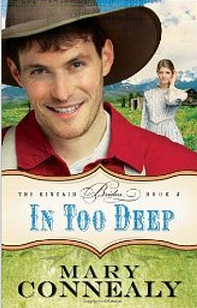 This book is the second in a series called "The Kincaid Brides" and is set in the year 1866 in Colorado.  The main characters are three brothers...Rafe, Ethan and Seth...and two women...Audra and Julia.  They live in Colorado in 1866; there are several plots or themes that intermingle, including getting lost in a deep cave and trying to find stolen money to keep the bad guys at bay.  Rafe and Julia, who are  newlyweds, force Ethan and Audra into a marriage of convenience so that Audra and her two children will have a place to live.

Normally this type book...Christian, western, romance...has all the makings of a Calgon-take-me-away kind of light read.  Because the book was sent to me for free I so badly want to be able to tell you about a great Wow factor, but in all honesty I can't do that. It was a good book, but not a great book.  From the very beginning I felt lost; the main characters' relationship was difficult to figure out because I hadn't read the first book, Ethan (who was supposed to be the hero) seemed to be, well, just plain goofy, and Rafe and Julia were overbearing and bossy.  If you're going to read this book I definitely recommend you begin with the first book.  Truly, it did get better the farther into the book I got and before I finished it I was wishing I felt much better about the characters.

Posted by StitchinByTheLake at 9:53 PM 10 comments 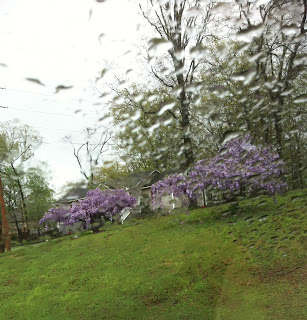 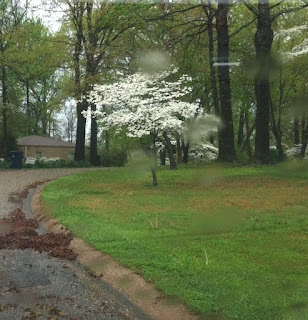 It rained about 6" here this week.  I took these pictures with my cell phone through the windshield of my car.  It was one of those  moments where I just pulled over to the side of the road and sat looking at the incredible beauty created just for us to enjoy by a Father who loves us enough to do that.

Posted by StitchinByTheLake at 9:36 PM 10 comments

I try real hard not to go so long between posts - it's been over a week - because if I do I forget what I did and can't write anything on it.  I'm working on that - the memory part.  I have a friend who says I should be drinking coffee because it's good for memory.  I hate coffee.  Have I told you that before?  I really hate coffee.  I love to smell of it but the taste, not so much.  It's my mother's fault.  Everything is my mother's fault.  Just like everything wrong with my children is my fault.  Mother's are the guilt queens of the world, right?  I digress.  Coffee.  I'm trying.  I drink one cup in the morning and one in the afternoon.  I doctor it up with fat free evaporated milk and honey but how long is it going to take before it begins to taste good?  And trust me, 1 tsp honey doesn't make it good.  It takes a lot more.  Lots more.  :)  Maybe someday I'll be able to drink it without honey - right?  Anyway, I'm not sure what I've been doing...I'm a bit confused.  Just like my Thanksgiving cactus, who doesn't know it's spring. 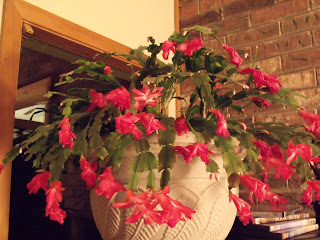 I'm trying to eat healthier too.  Today I put 1 tsp coconut oil on my oatmeal because there's a new study out that it helps with Alzheimer's.  And obviously my memory needs some help so I'm trying it.  It added a nice flavor.  I also made some healthy granola to have with my fat free Greek yogurt.  This recipe also came from my friend. 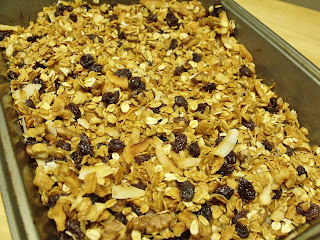 It's very good - oats, unsweetened coconut, walnuts, raisins with a nice syrup poured over and then baked.

Besides getting healthy what have I done?  I've read lots of blogs, deleted my Pinterest boards (lots of controversy/copyright questions that made me nervous), cried over deleting my Pinterest boards, read several trashy books (not morally trashy, just romance type things), been to the Chiropractor a couple of times, gotten a massage, had my hair cut, got a manicure, bought groceries, and did just a bit of stitching.  I got the back on the Down on the Farm piece that you've seen three times already but really should see again because it's beautiful.  I'm not modest. 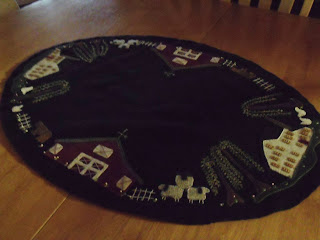 Not a great picture but it's raining here and dark, dark, dark.  It's rained since yesterday morning...hard.  Like 5 or 6 inches.  Like this. 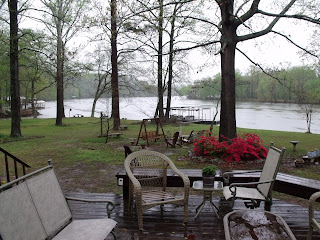 There used to be a tangled mess of old azaleas, thorn vines, hedge and poison ivy around that tree out by the boat dock.  I started cutting it all out earlier this week and had to stop for the rain.  Now it's just a mess with all the things I cut laying all around but when the rain stops I'll get back out there and get that bed cleaned out.  Meanwhile I watch it rain.  And rain.  And rain.

I've done a little more stitching too.  I have the handwork done on the February Harrington and Hannah block and need to add the patchwork.  I'm using a backstitch but Michelle is using a running stitch.  I like hers better. 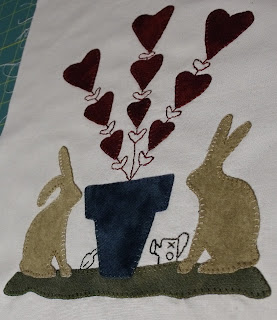 Meanwhile the March block is out...and is so cute...and I need to get started on it.

And I'm working on the February Promises and Borders block...and March is out on it too and March is almost over and April is coming and I'm behind.  Way.  Behind. 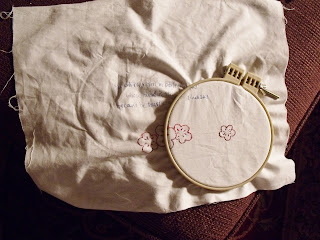 I also finished my third Whimsical Garden block - this isn't a BOM, I'm just pretending it is. 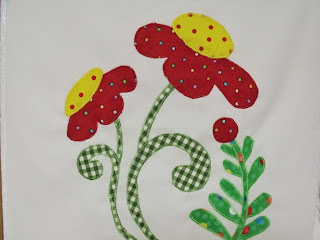 Thank goodness my violets aren't confused at all - they know it's spring and they're doing what they're supposed to! 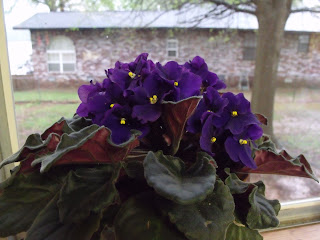 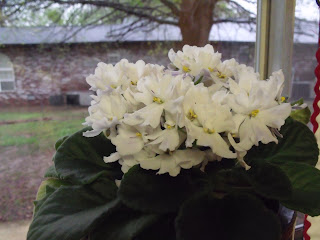 And aren't you glad my memory is bad because if it was good and I could remember everything I'd done this last week you'd be reading for days.  If I'd done a lot.  Which I haven't.

Posted by StitchinByTheLake at 10:32 AM 21 comments

I'm about halfway through cleaning out and reorganizing my sewing room.  Today I came across these two fat quarters: 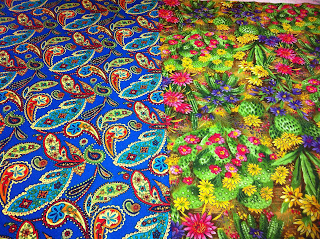 My quilt guild retreat is the first week in April and I have to produce something from these two fat quarters plus any other fabrics I want to add.  Good grief.  I have no imagination.  My brain is tired. I've had these since last April but I forgot.  I should  never have said I would.  There's no possible way to put these two together.  I need to sweep the porch.  Really.  Have I whined enough?  :)

Taking all suggestions.  Or  maybe you want to volunteer to make it for me.  Seriously.  No, I'll do it if you'll just tell me what to do.  Hurry!

Posted by StitchinByTheLake at 3:33 PM 30 comments 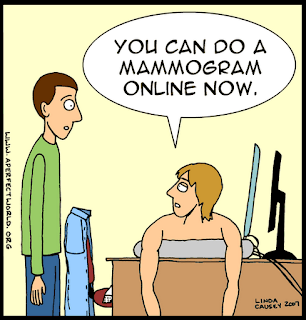 Now you know you can't do this online, but when I saw this on Google Images I sure wished we could!  I have mine scheduled though, with a follow-up with my gynecologist.  How about you?

Posted by StitchinByTheLake at 8:48 AM 9 comments

with the fact that I have 10 1/2 tops waiting to be quilted.  Is this a sickness? 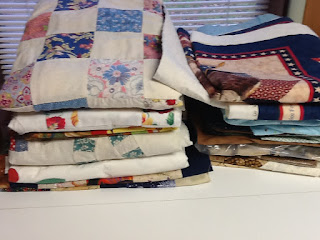 Posted by StitchinByTheLake at 10:35 AM 30 comments 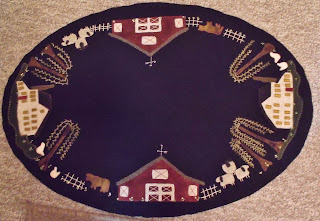 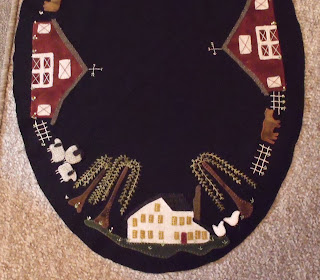 I've been working on this piece for a very long time and ya'll have seen it before more than once at different stages.  But at last the applique and embroidery is complete.  I want to steam it a just a little and then I'll blanket stitch a backing to it but I don't have a good steam iron here with me right now so later this week when I get home I'll get it basted together.  It was a kit from Primitive Gatherings that I bought some time ago and I'm calling it Down on the Farm.  I love the richness of their wools.

As many of you know I'm on  a mission trip in south Louisiana and I've been here for five weeks now.  On Tuesday or Wednesday I'll be heading home and I'll be so glad to get there!  I've had a wonderful time; I've made new friends, spent time with old ones, and learned new skills.  I've been reminded how much I love volunteering and how much I don't ever want to go back to work.  :)  I saw my first Mardi Gras parade, ate boiled shrimp several times (yum!), and experienced spring in early February.  I've read several books, gone to bed most nights before 9:00 and spent time alone with my Bible.  I've missed my husband, my children and grandchildren, my friends, my sewing room, my Bible study class, my beautician, the view out my bedroom window at home, and my town.  For those of you who are able I highly recommend some time alone, away from home and your "normal."  It makes you appreciate things you don't ordinarily think about.

Posted by StitchinByTheLake at 8:05 PM 31 comments