Did you think I was never coming back?  I was beginning to!  When I last posted I told you I had surgery on my right hand.  At that point I was looking l like this: 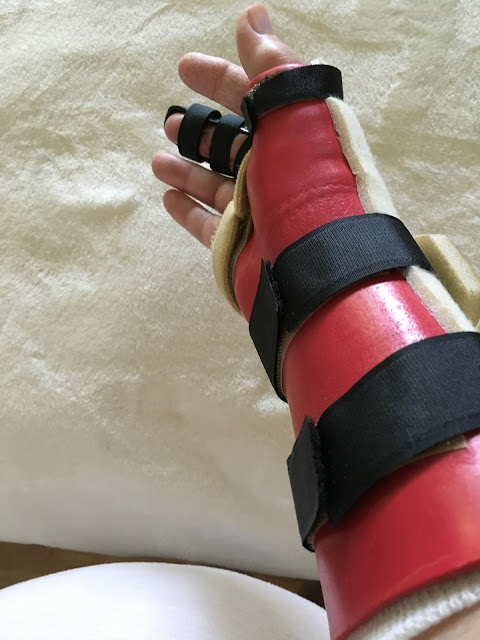 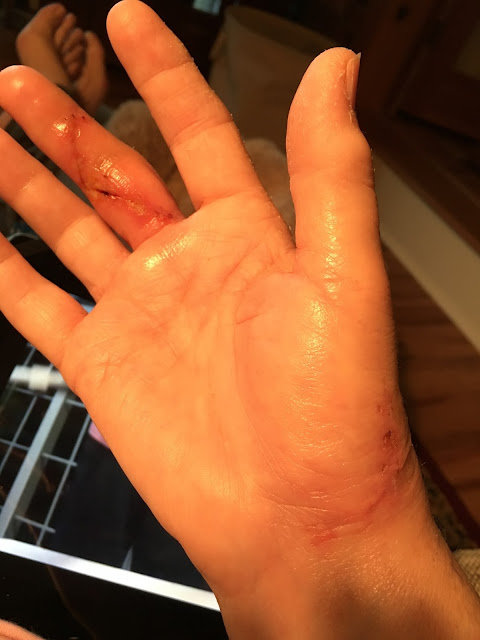 Actually, I thought it looked pretty good!  You can see that on the finger the surgeon made a V cut so that the scar tissue wouldn't hamper movement.  That finger got a plastic joint.  The thumb, though, got a ligament from my wrist rolled up and put between the bones to form a cushion.

All the redness is gone now and the scars are already white and fading.  I have no pain in those joints any more but unfortunately my grip is not up to par yet.  I couldn't make a fist before and still can't make a good one now but it's better than before for sure.  I'm even able to open some jars now if they aren't too stuck.  :)

Of course this limited my stitching so I've done what I could - which oddly enough was more cross stitching than anything else.

On the sewing front I've made about 20 of these project bags - several of which I have given as gifts to my stitching friends: 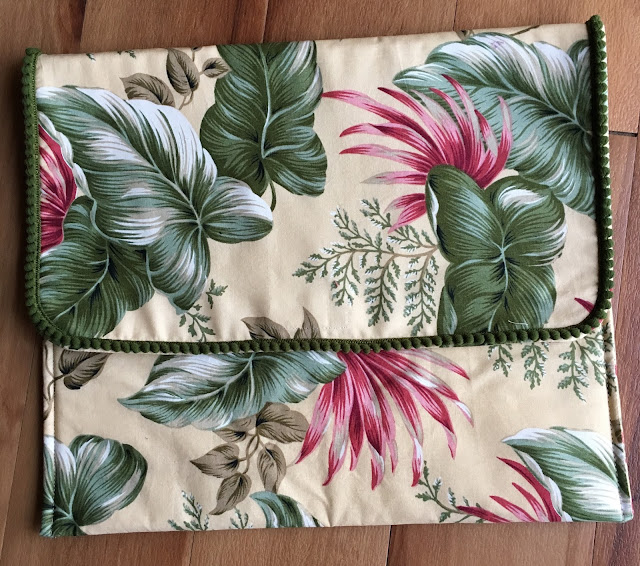 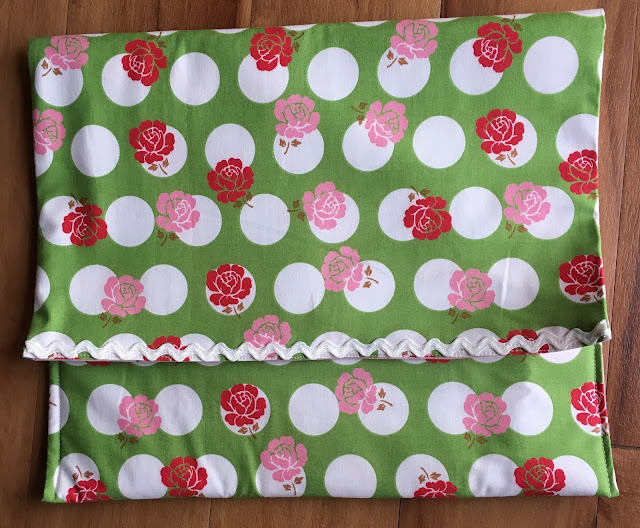 They are pretty large - about 12 x 14 - and the tutorial is from Vonna Pfeiffer, The Twisted Stitcher.  These are perfect for holding everything I need for a wool applique or cross stitch project.  And speaking of wool applique, we were weren't we?, my sister sent me this pattern from The Buttermilk Basin that I've been wanting!  I can't wait to get this one ready for stitching! 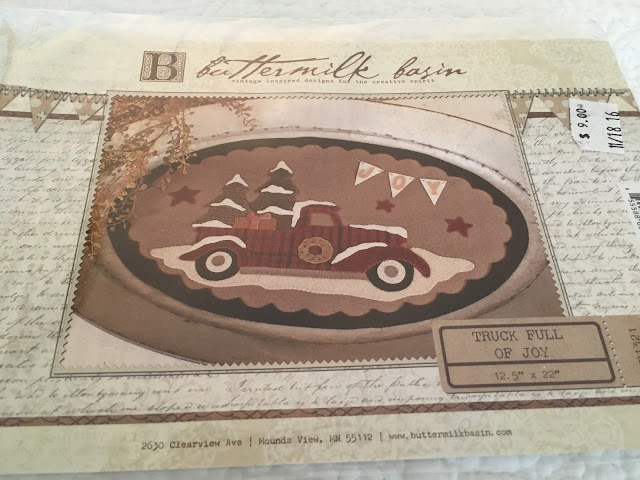 It's just beautiful when you see it all stitched.

I also finished a couple of cross stitch ornaments: 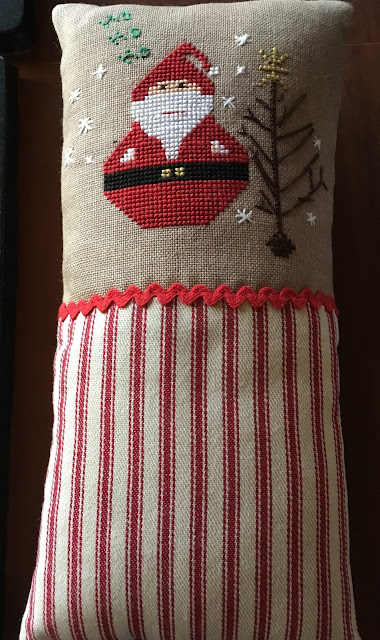 This one is Roly Poly Santa by Robin Laukhuf of Olde Willow Stitchery Threads and was in the 2016 Christmas-Winter Magazine. 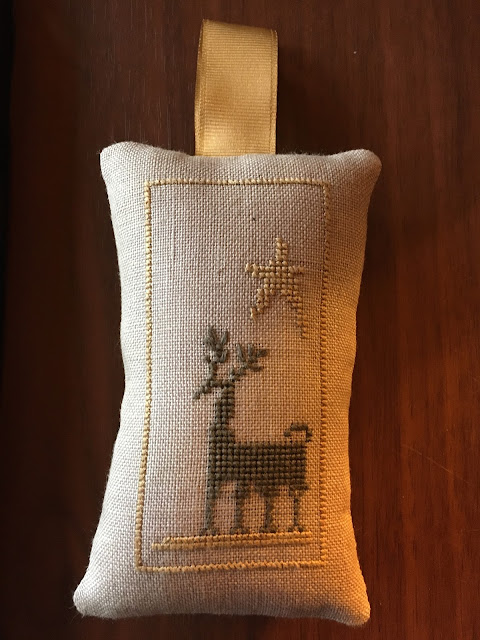 And this one is Eve of St. Nicholas by Lori Markovic of La-D-Da and is in the 2015 Christmas Punch Needle and Primitive Stitcher Magazine.  I've done a couple of others too but they are either on the tree or in some decoration I've done!

I also took a short trip with my sister to see her daughter, my niece, in Austin, TX.  Our path took us through Waco, TX so we made a little side trip to see: 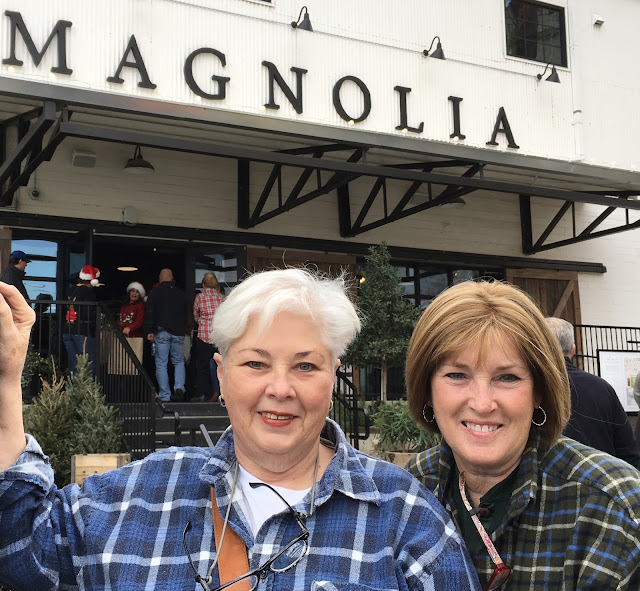 The Magnolia Market - the shop you've seen on Fixer Upper on HGTV,  designed and built by Chip & Joanna Gaines.  If you don't watch HGTV you won't understand this.  :)  We went on a Saturday, which I will never do again because there were literally hundreds of people!  But she sure had some pretty stuff.

And one last cross stitch piece you might enjoy: 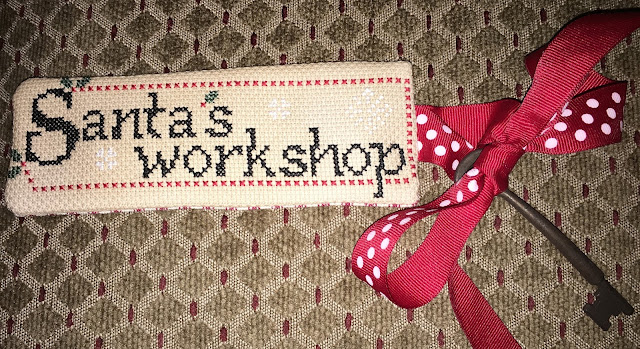 Santa's Workshop is by Bonny Woomer of The Nebby Needle and this one was also in the 2015 magazine I mentioned above.  It took some searching but I finally found an old rusty skeleton key to add to it and this is probably my favorite piece I've stitched this year.

And here's wishing you the key to Santa's Workshop and lots of love and laughter during this season.  Merry Christmas!

Posted by StitchinByTheLake at 4:20 PM 31 comments