For the last couple of weeks I've been "taste testing" some wonderful new muffins that Madame Samm at Sew We Quilt is making.  Actually, she's launched a new company and is selling the mix so that you can make them fresh at home.  They not only look delicious.... 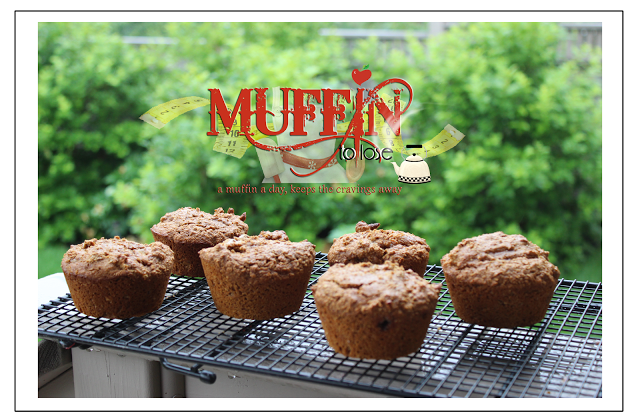 they ARE delicious!  I've lost a couple of pounds eating them and while that's good news, the best news of all is that I'm finding myself to have more energy and to have fewer times when I have a craving for something sweet.  I have no idea how that works...well I sort of do because I read all about it on "the muffin blog".     Check it out and see what you think.  I bet you'll be as impressed as I am.  If you are interested there's a link on my sidebar to the blog, and there's a link on the blog to order them.  Or, if you live in my area (Arkansas, Louisiana, Missouri) e-mail me and I can get them for you.  I just happen to have bought a few myself.  :)

On another note - I won't be able to eat my muffins tomorrow because I'm having a little oral surgery.  Several months ago I had a tooth pulled and now it's time for the implant.  I'll be glad to get it over, or nearly over, since I've been living with this gap  in my teeth which makes it difficult if not impossible to chew on that side.

And if you've read this far - a little stitching news!  I finished this Lizzie Kate pattern today - 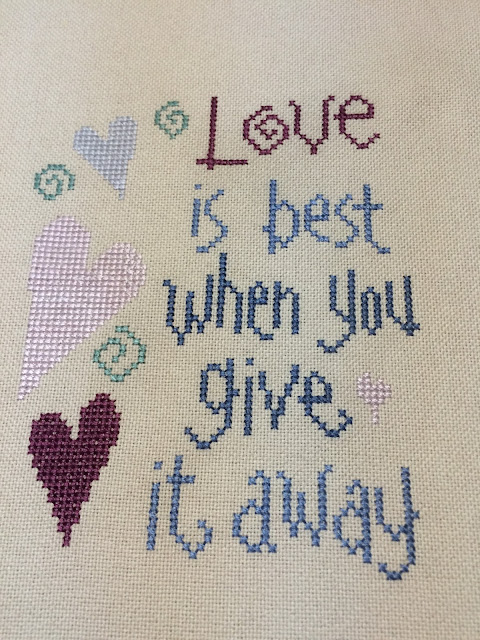 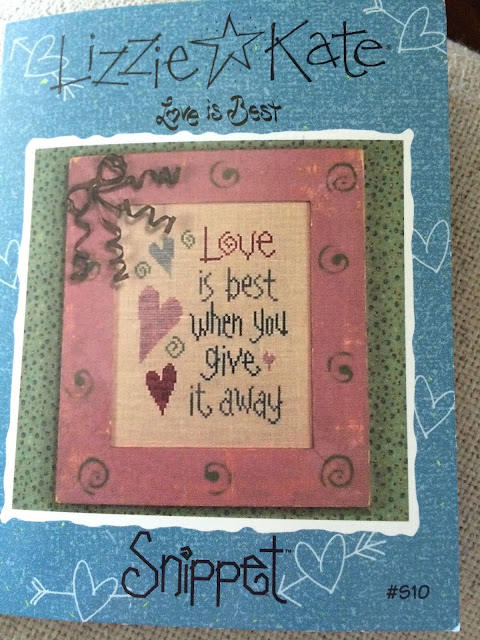 I don't know how I'm going to finish this but while I'm deciding .... this was a pay it forward/pass it on pattern that I won so it's time for me to pass it on to someone else.  If you would like to win this, and are willing to pass it on when you finish it, then let me know in the comments.  In a couple of days, when I get past the implant procedure, I'll draw a name and send it off to the lucky winner!

EDITED:  Vickie from A Stitchers Story has won the pattern.  I've e-mailed her and will be sending it off as soon as I hear from her.

Posted by StitchinByTheLake at 9:25 PM 20 comments

At my house the 4th of July is the time we come together as a family to celebrate our great country and to celebrate each other.  One of my precious grandchildren was born on the 4th of July so it seems fitting.  We go for boat rides, cook shrimp gumbo (a family tradition), roast marshmallows for S'Mores and watch the annual fireworks.  My house becomes a repository for damp beach towels, a cool haven when we've endured the heat as long as we possibly can, and the perfect place for long story telling sessions about past family adventures.

I'm adding a couple of cross stitch pieces to my collection this week - and wishing I'd gotten around to a couple more.  :) 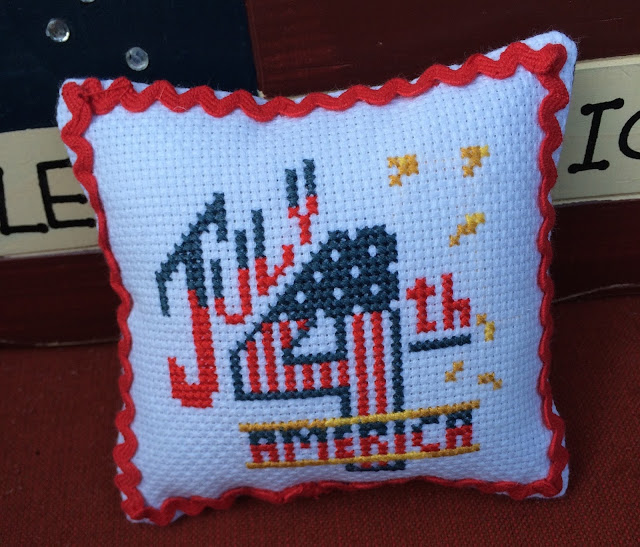 is tucked here in the middle of my purple shamrock for a bit of luck (this shamrock was a gift from my sweet mother-in-law many, many years ago.... 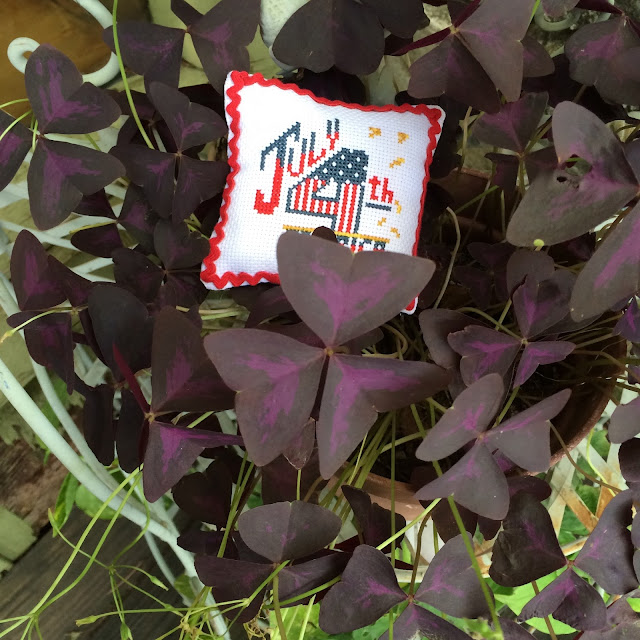 but will ultimately rest in this antique tool kit where I'm collecting a variety of holiday and primitive pillows that I display all year. 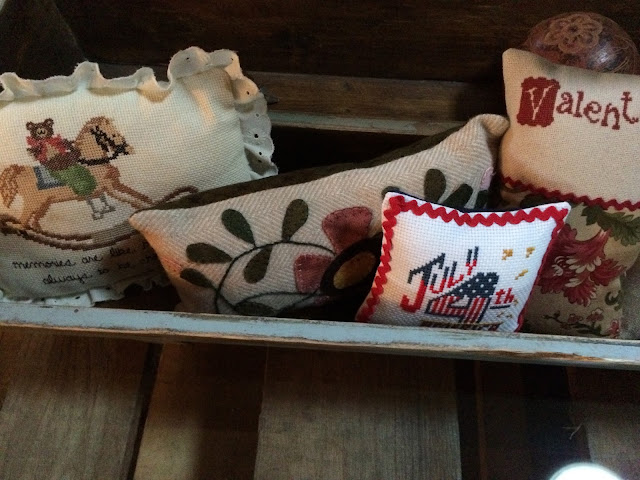 My second 4th of July piece... 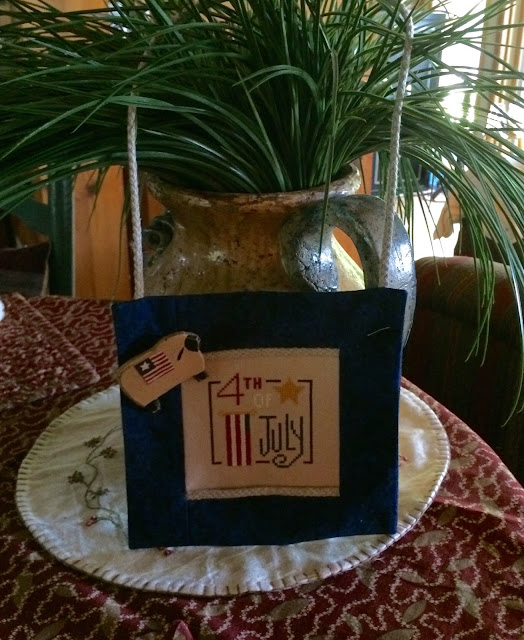 is a simple flat piece that I added a hanging cord to... 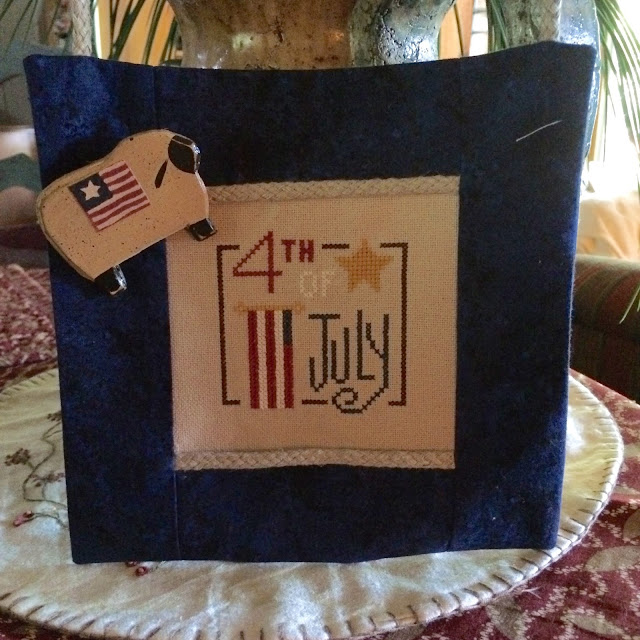 and a sweet little patriotic sheep pin seems to look out over the whole thing.... 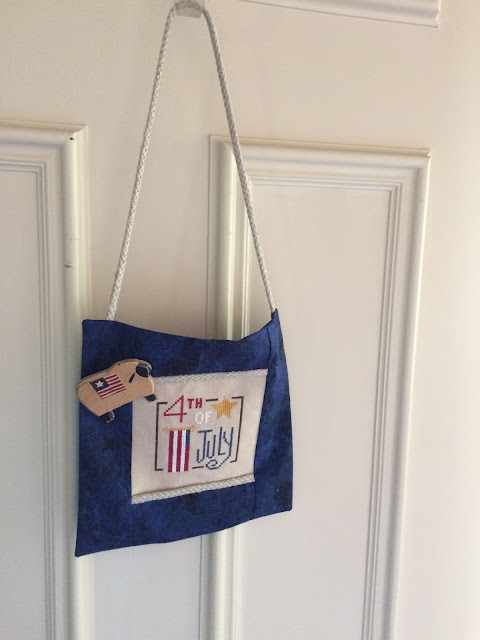 It's hanging on my back door to greet family and friends as they enter next week. 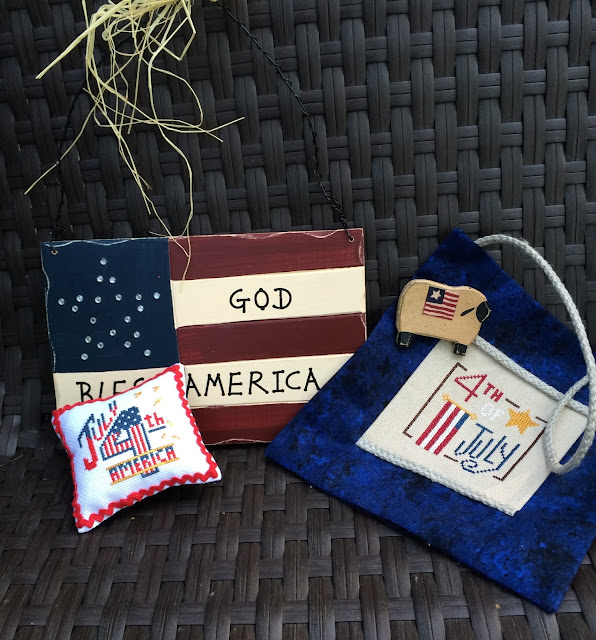 I'll be putting the rest of my decorations out early next week, after we get the deck scrubbed, blown off, and otherwise set to rights.  We've had a lot of windy days lately and I'm still getting dead leaves and twigs left over from the hail storm all over the deck.   I did manage to finally find and purchase a new table and chairs to replace the ones the hail destroyed.  I've made one new throw pillow - some of my older ones are sure getting faded from the sun - and am working on some place mats for that table.  I hope to show those in a couple of days.  Are you decorating for the 4th?

Posted by StitchinByTheLake at 6:41 AM 22 comments

The last time I posted, and yes I know it was two weeks ago to those of you who scolded me today for not posting more often (you know who you are!), the roofers were here and I had only gotten a little stitching done.  Well, the roofers are gone and except for a few little snippets of roof padding that I keep finding in the grass the only evidence of their presence is the new roof.  And if I hadn't told you it was new you wouldn't know because really, who notices a roof?

The dock, which was loosened from it's moorings by the torrential rains we had some weeks ago, is still tied to the trees to keep it from floating away and is awaiting the dock repair people to rescue it.  My husband and grandson tried but it defeated them.

The camper, which was damaged in the hail storm, has gone to the repair shop for a yet-to-be determined amount of time.  It seems that the brand we have is no longer being manufactured and so parts must be sought from other companies.  I have no idea what that means but I expect it means a long time waiting.

The deck furniture which was destroyed by the Superman sized hail has not been replaced but the deck box that "hail holes" in it has.  I can't find chairs that are as heavy as the ones I had so I'm still looking.

Then ten days ago my husband and I were driving to Little Rock, about an hour away, on a super busy interstate when we were hit from behind by an 18 wheeler truck.  On the passenger side.  Where I was sitting.  Traffic was awful that day, bumper to bumper, and while we slowed for the traffic in front of us the truck didn't.  We drive a GMC Acadia, a fairly large SUV.  Thank goodness.  The truck hit at the back tire, slid all the way up to the front door, then skipped around where I was sitting and hit at the mirror and on down the front.  I assume the angel who was standing between that truck and me is a little larger than an average man because that's the width of the skip in the dents, scrapes and holes that are in the side of the car. 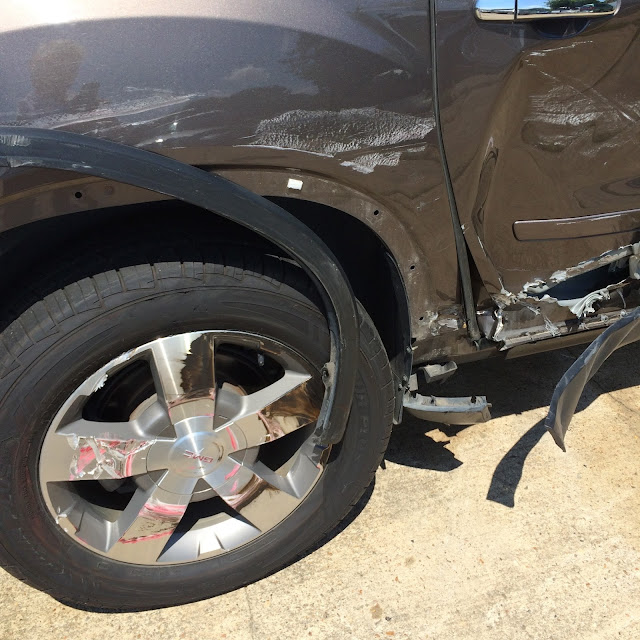 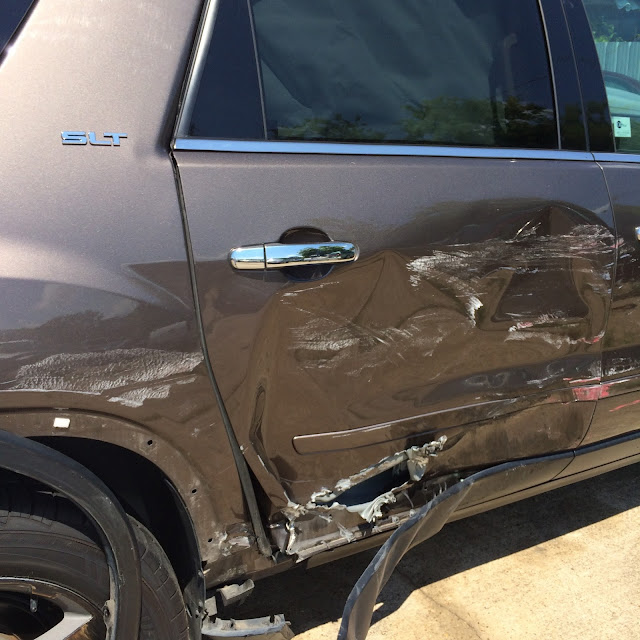 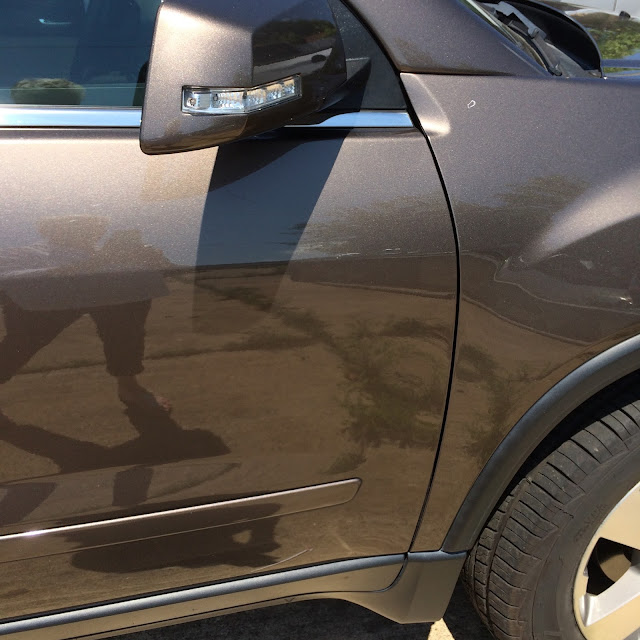 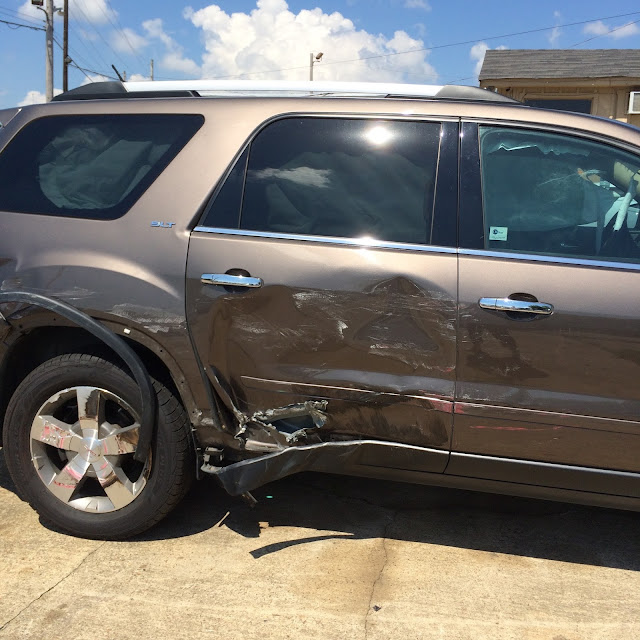 I wasn't kidding about the angel...you can see where the truck stopped right there at the door handle, and where the scrapes start back at the mirror.  All four side air bags deployed which kept my head from bouncing off the window.  All in all, we were blessed beyond measure - we both walked away with only stiff and sore bodies and one small cut on my arm from the airbag.

I've been driving a rental car for 10 days now and that's getting old.  Just today the trucker's insurance company called to tell us they have "totaled" the car.  It would cost far more to repair it than it's worth.  Hopefully tomorrow they will call back to make an offer for the "replacement."  Right.  Like most people I was making car payments - had 6 more to go and it would have been paid for.  So now, whatever they give us I'll put down on a new car and be making payments again.  For who knows how long.  Ok, I'm through whining now - it's just a car and we weren't hurt and I'll get another car and all will be well.

Needless to say there's been no stitching done in this house since my last post.  I did manage to get to a needlework shop because shopping is medically necessary when you've had a wreck - ask any doctor and I'm sure they would agree.  I didn't buy much because really, you don't want to overdo any medication, right?  I have no idea where that stuff is right now or I'd show it to you.  It's probably with the rest of my "stuff" I've put in the corner out of the way - one of our daughters and her two teens have been living with us for 2 1/2 months and they've finally gotten to close on their house and are moving tomorrow (can I say yippee!) so their "stuff" (which in the way of my "stuff") will soon be gone and I'll be able to find my "stuff" again!  :)

Posted by StitchinByTheLake at 9:33 PM 49 comments

A Lot of Hammering And A Little Stitching

After all the hail damage last month we've finally gotten to begin the repairs!  Yesterday the shingles arrived... 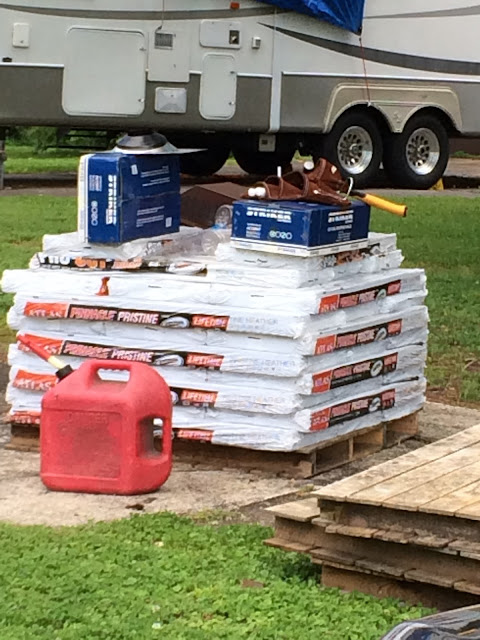 The shingles went up a conveyor belt and arrived on the roof.... 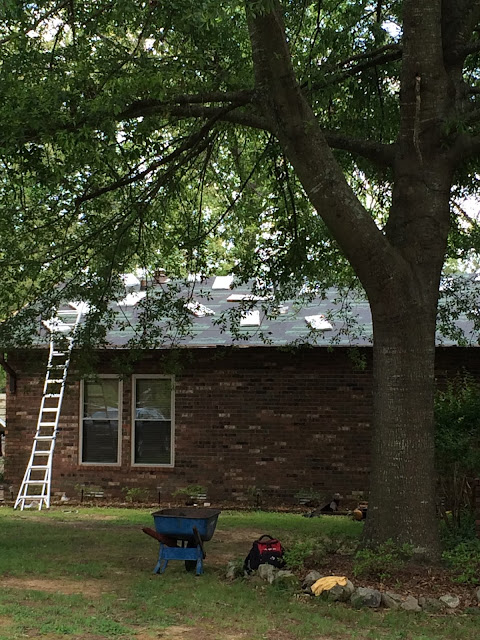 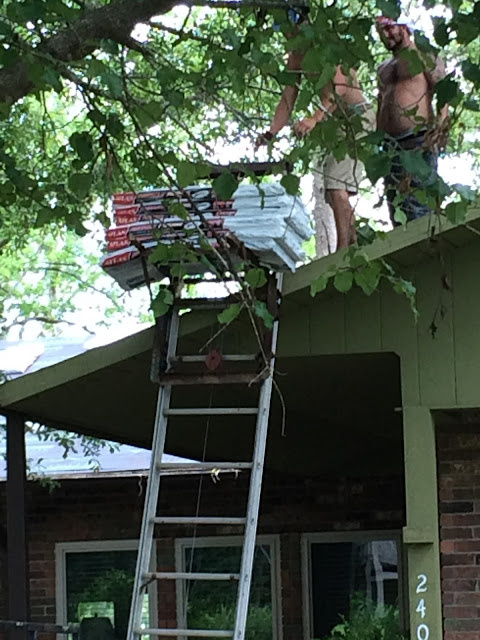 And the house was finished! 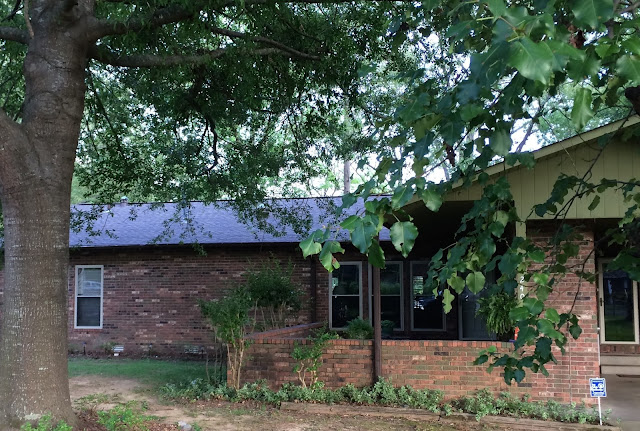 We have a garage that is a separate building from the house so that should be done quickly tomorrow.  And they aren't quite through with the clean up part but they'll get that done when they finish the garage.  I want to note though that as bad as they wanted to finish the house today, and as hard as they worked, I noticed a complete cessation of hammering for several minutes when my daughter and a couple of her friends (all of them very cute in their bikini bathing suits) went down to the dock to lay in the sun.  :)

Meanwhile, I can get back on the deck and enjoy the view! 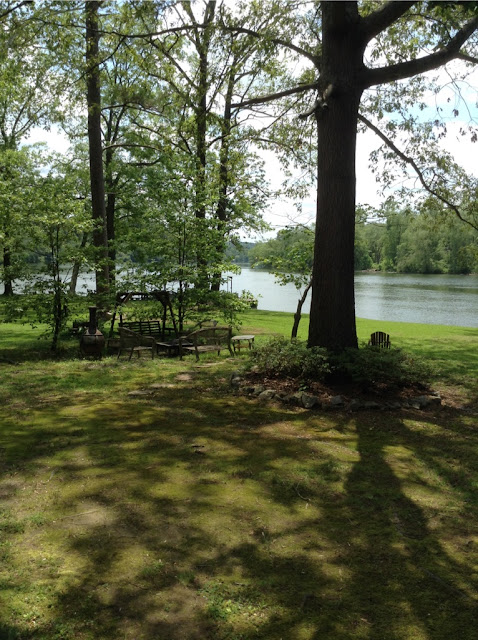 I've managed to finish the stitching on a couple of small things....this little witch silhouette that I have no idea how I'll finish....done on a gold 28 count evenweave that isn't showing up the correct color at all!   The fabric is really, really gold and the witch is black. 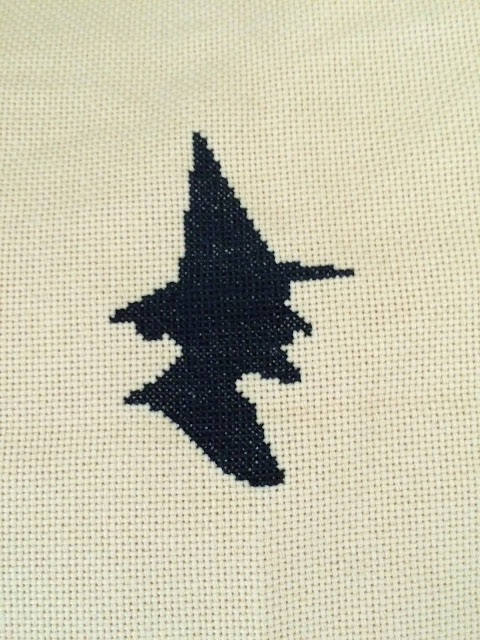 And another small patriotic piece.... 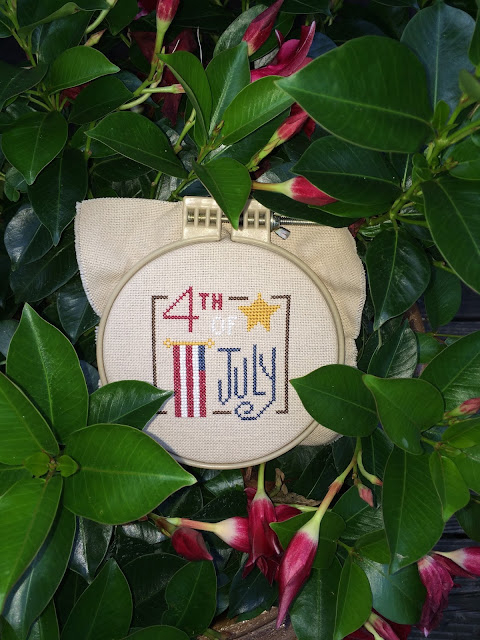 I've begun work on the second Teacup Herb (Thyme) from Just Cross Stitch magazine - I finished the first one some time ago and thought I would have the second one done before the next two came out.  That didn't happen.  It's just that I love stitching the little things so I get sidetracked.  :)  And now I'm off to do a bit of stitching before bed!

Posted by StitchinByTheLake at 8:02 PM 21 comments