Have You Started Your Patriotic Stitching Yet?

Last week I didn't get to do much stitching but I did finish this one... 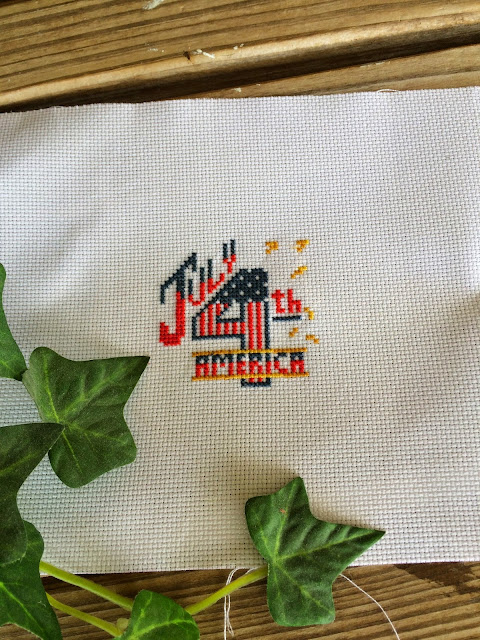 I'm looking for another small patriotic pattern and I know there are lots of free ones out there....somewhere in the cloud!  Do you have a favorite?  I'd love to hear from you and maybe get a link?

As many of you know I'm on a lengthy mission trip and will be going home next Friday.  My daughter and her family are house sitting for us and I'm hoping they'll stay on for a while after I get there - just some time to visit.  Normally here at the mission I'm the dorm mother - we have 40-60 volunteers each week who come here to put together kits that are sent all over the world in times of disasters.  This week I got to help putting those kits together, this time health kits that contain things like a hand towel and washcloth, bar of soap, comb, toothbrush, etc.  I had so much fun!  It was so hot (there's no air conditioning) but everyone just works so hard and has such a good time visiting while they work that the time speeds by.  This is me, hard at work! 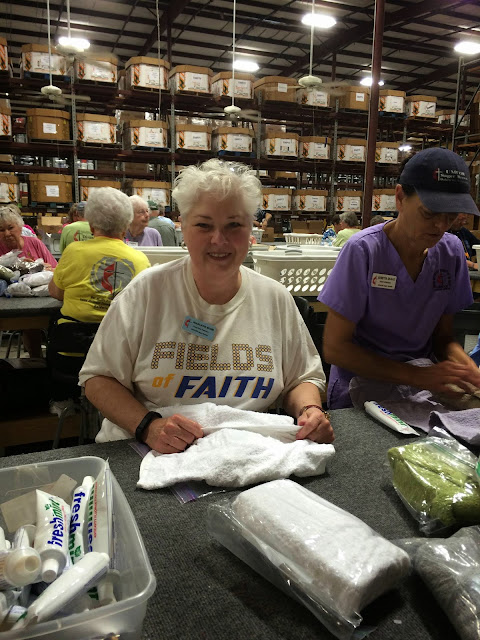 I should have said  - this is me desperately needing a haircut and in my grubbiest clothes!  My hair is normally straight as a board but for some reason it's decided to curl just a bit.

And this weekend, which is a holiday weekend for Americans, I think I'll do a little Halloween stitching.  :)

Posted by StitchinByTheLake at 9:51 AM 21 comments

Finished But Not Finished

I haven't had much time for needlework this week but I was able to get a couple of things stitched...but not finished.  I think both of these will be small pillows/pinkeeps but until I get home from this mission trip I won't know for sure.  I should probably plan ahead for that - the finishing - but I just get excited about the stitching and don't think about the end product.  :)  First I finished one of the Sheep Virtues.... 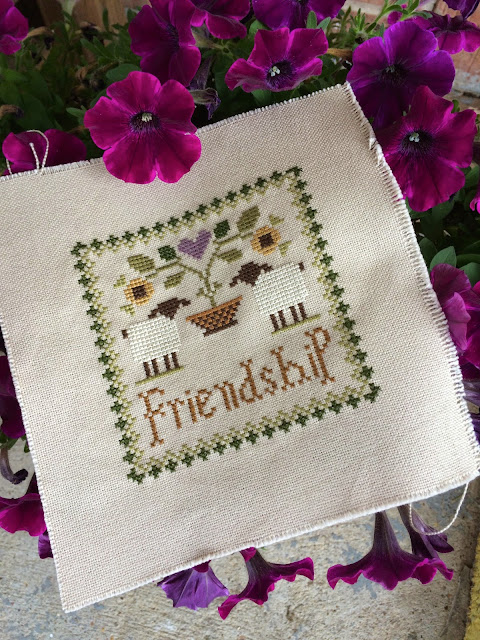 Aren't those petunias beautiful!  I bought those the first week we were here, in early April, and I'll be taking them home with me when I go because they'll last longer in Arkansas than they will in south Louisiana. 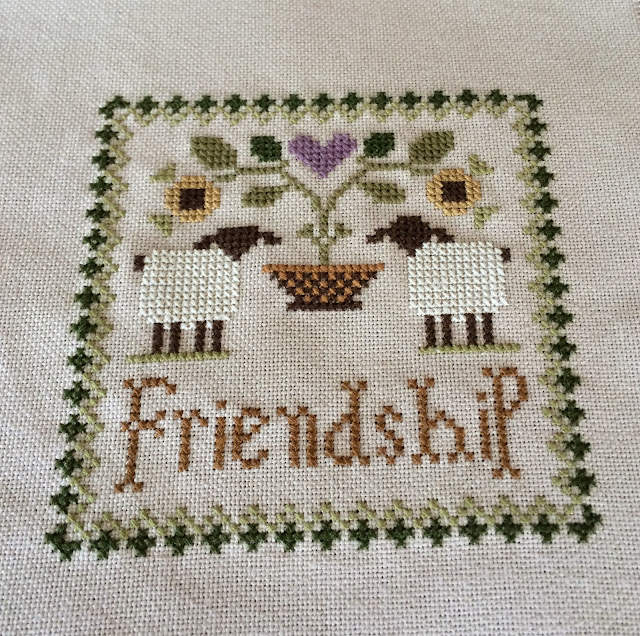 The pattern shows the year in the space under the basket but I left that off.  I have a button I'll use there when I finish this piece. 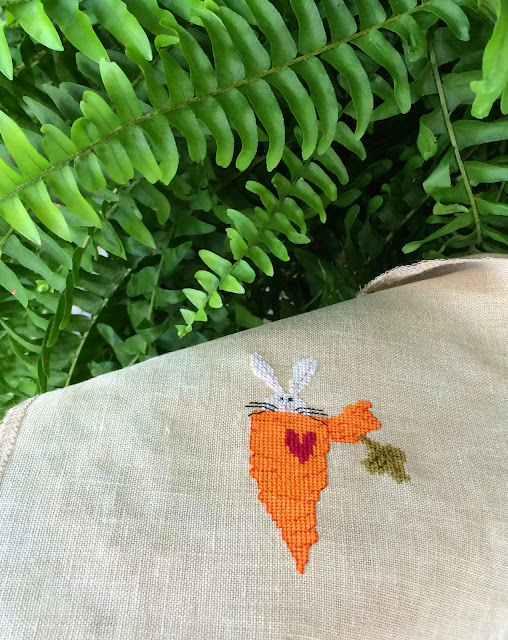 I started this piece before Easter but put it aside for a little while.... 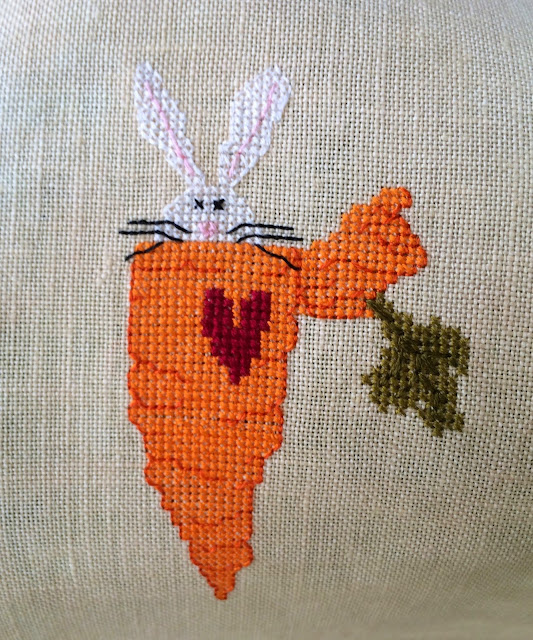 Linen might not have been the best choice for this pattern but I love the way it looks.  I find my eyes have a hard time with linen sometimes but I have a new magnifier lamp thanks to a friend who found it online for me, and that makes all the difference in the world!

The temperature has gone up and so has the humidity here in south Louisiana - it will likely hit 90 sometime this week.  We'll only be here two more weeks and then I'll be home.  Our daughter and her family are house sitting for us and I'm looking forward to having them there a few weeks before they move into their new house.  Our other daughter will be moving about the same time so we've got lots of cleaning, painting, remodeling, etc. in our future.  And we have a fun trip planned with our son and one of the girls to see my sister and then on to a St. Louis Cardinals game.  After that we'll be in the mid-summer time on the lake with friends and family - can't wait to get back to this view out my bedroom window! 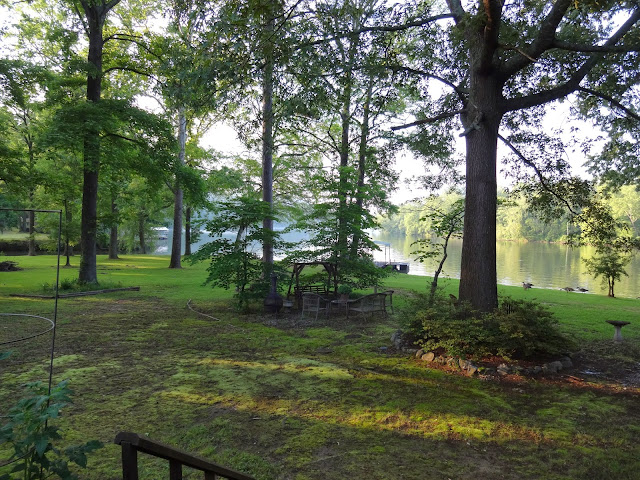 Posted by StitchinByTheLake at 2:34 PM 42 comments

Lilies, Crawfish and Other Stuff

I've done a little stitching since my last post....

You've seen this piece before but I decided to put it on the lid of a basket.  It's not finished because I think it needs some trim on the top and bottom but so far I like it. 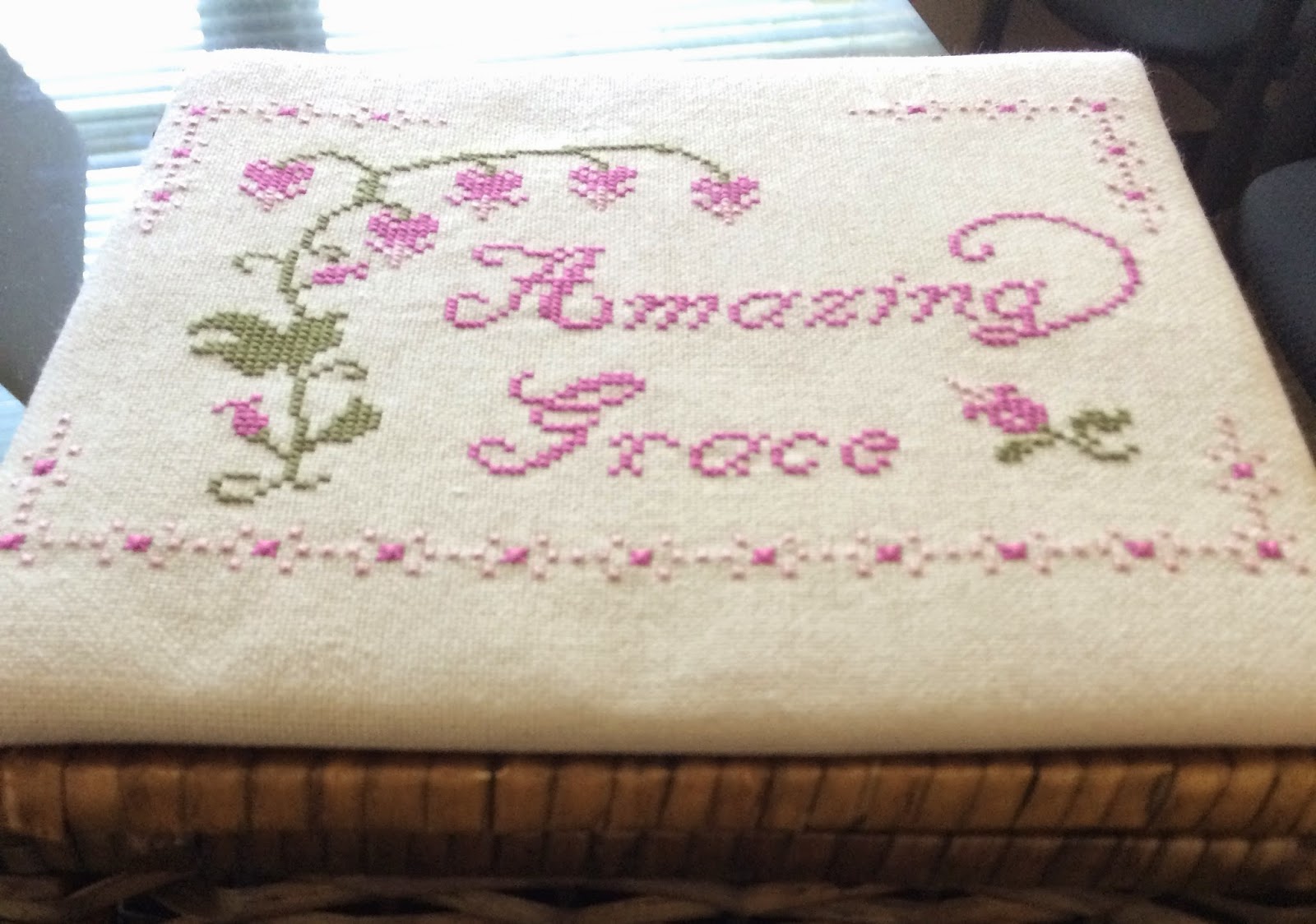 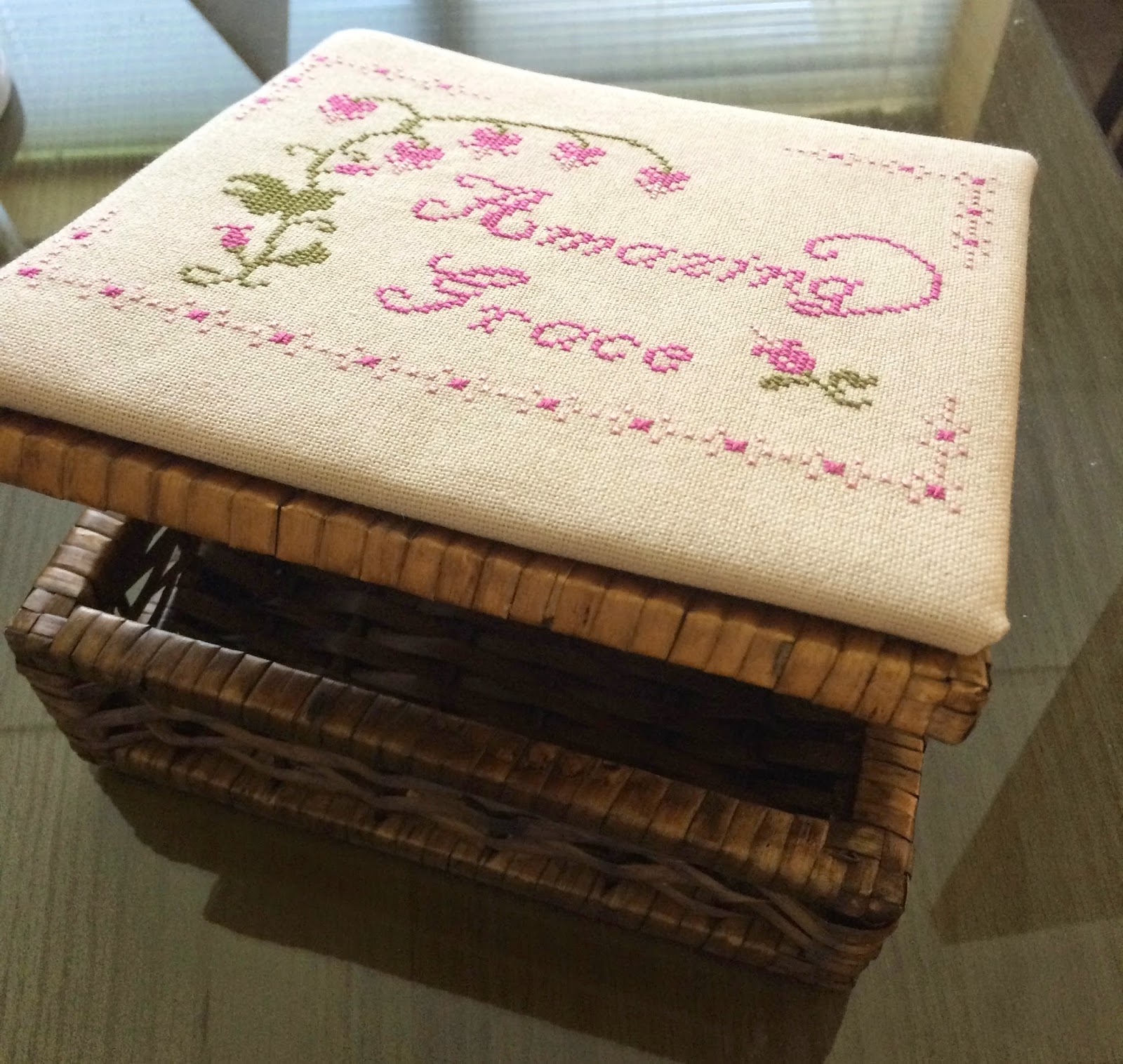 And I've begun one of the Sheep Virtues - Friendship.  I'm almost through with the lettering and then have only the border to go. 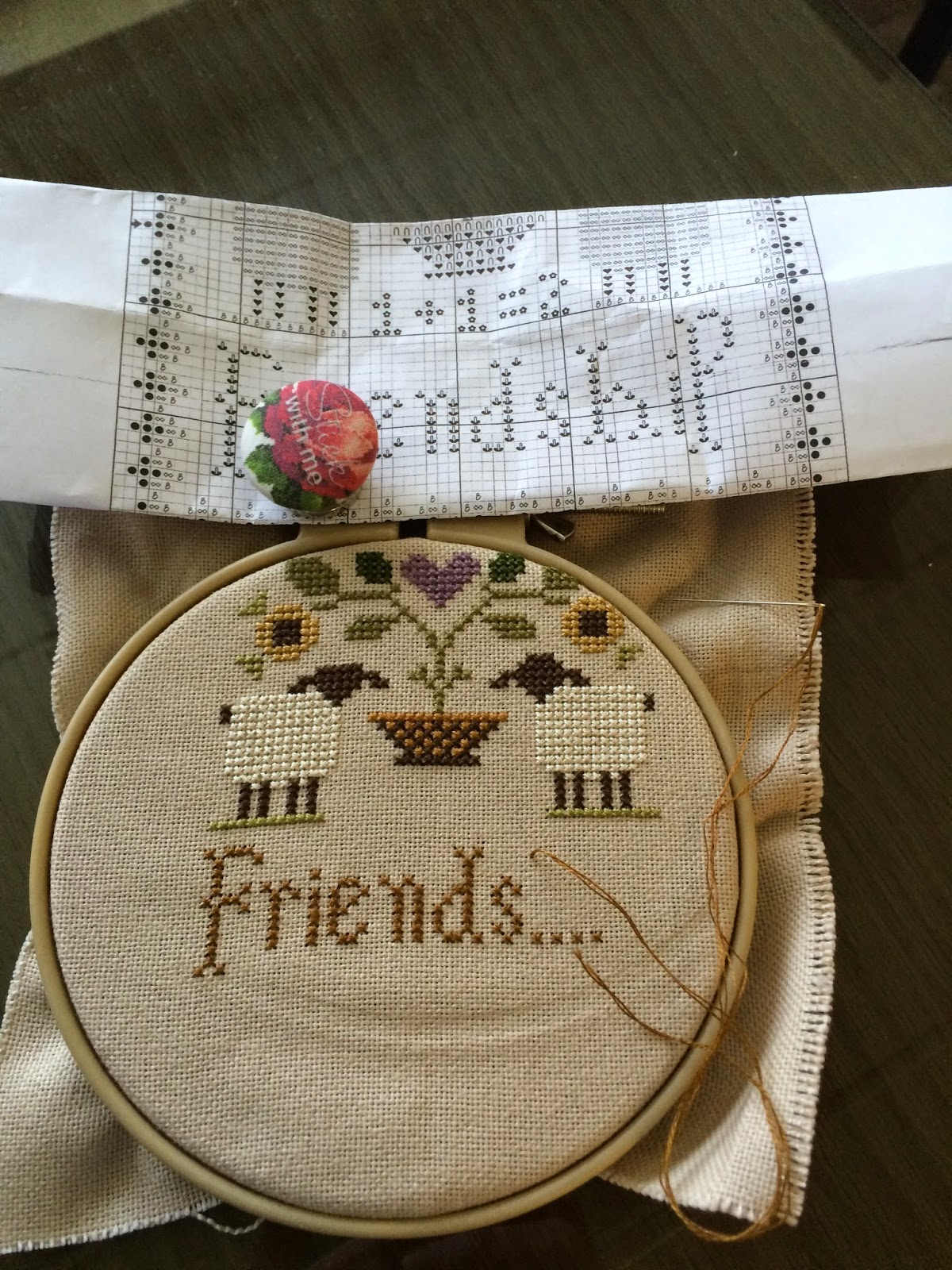 Yesterday we went to Breaux Bridge, Louisiana, which is about an hour away from the mission where we're volunteering right now.  It's not a big town but it hosts the biggest Crawfish Festival in the south, or so they claim.  Well, really, who else would claim that?  :) 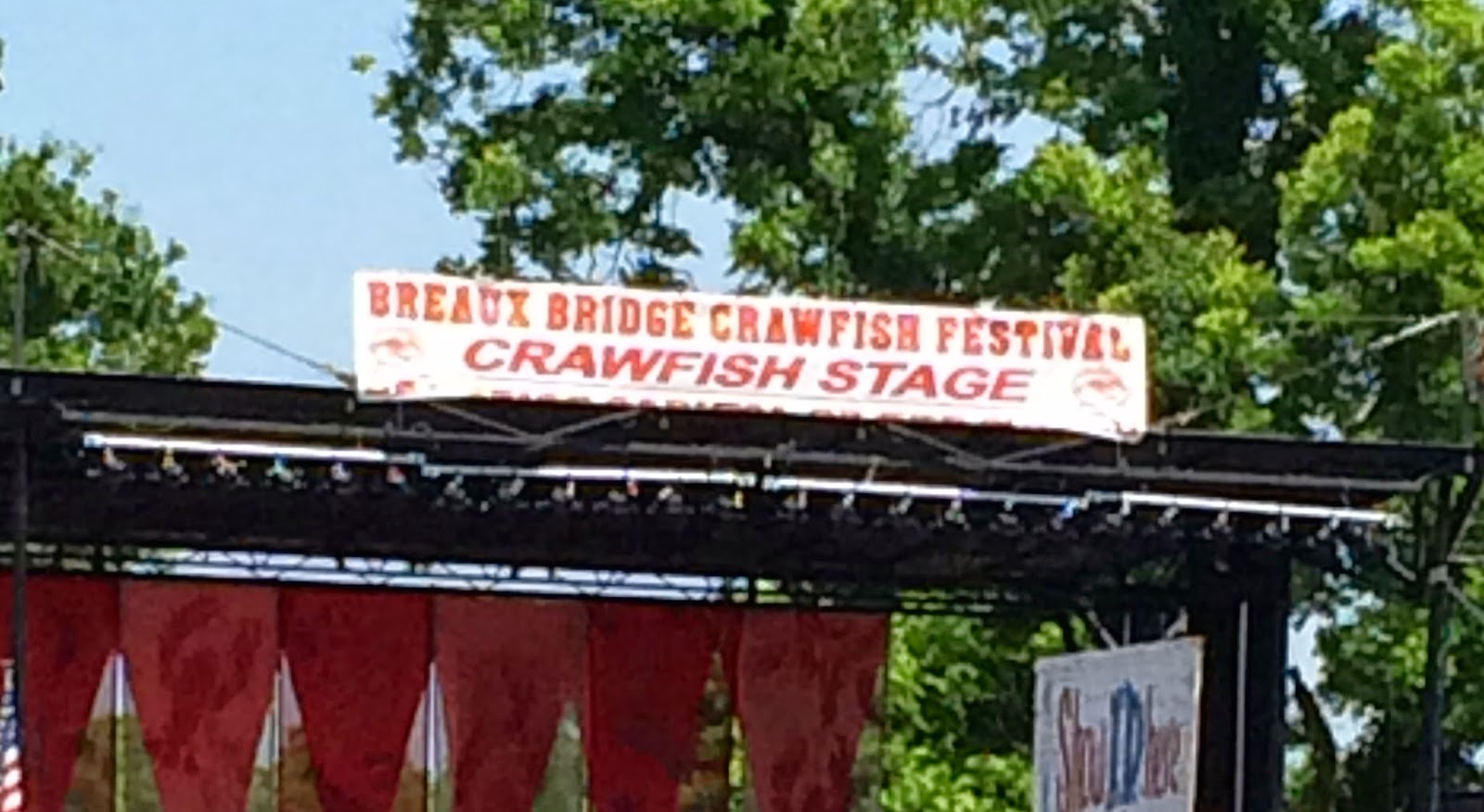 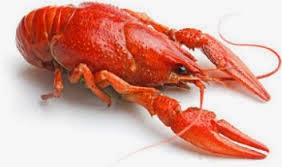 There were literally thousands of people there listening to the local Zydeco music, dancing, wandering through the craft booths, drinking a glass of lemonade or a beer and sampling the crawfish. 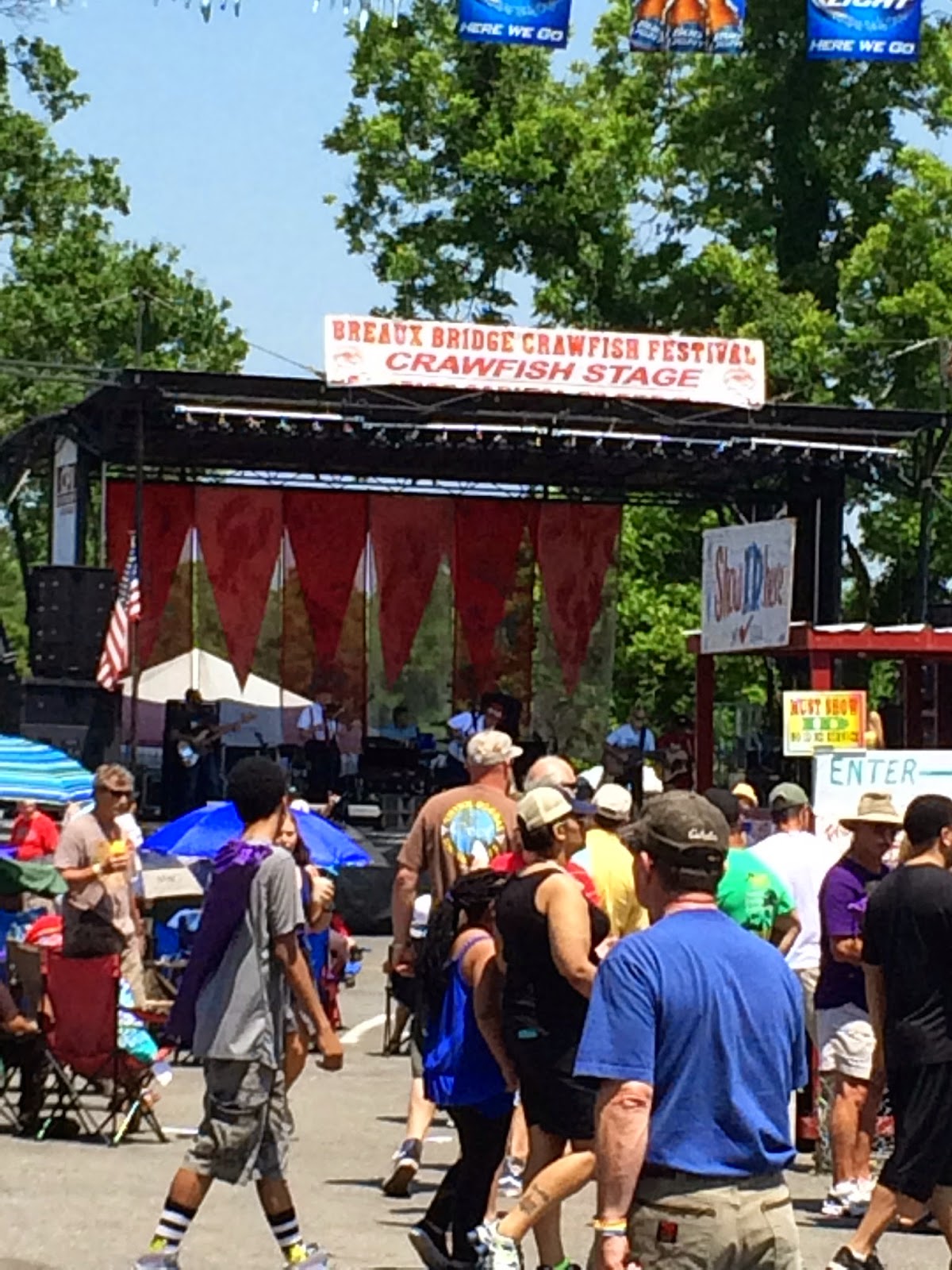 Crawfish.... etoufee, jambalaya, fettucini, egg rolls, fried, boiled, made with spinach and a cream sauce and put into a bread bowl, even hot dogs made of crawfish.  The traditional way to cook them here is to boil them with lots of spices, new potatoes and corn on the cob. 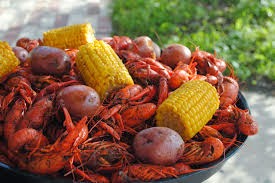 Meanwhile, here at the mission the lilies have begun to open their buds. 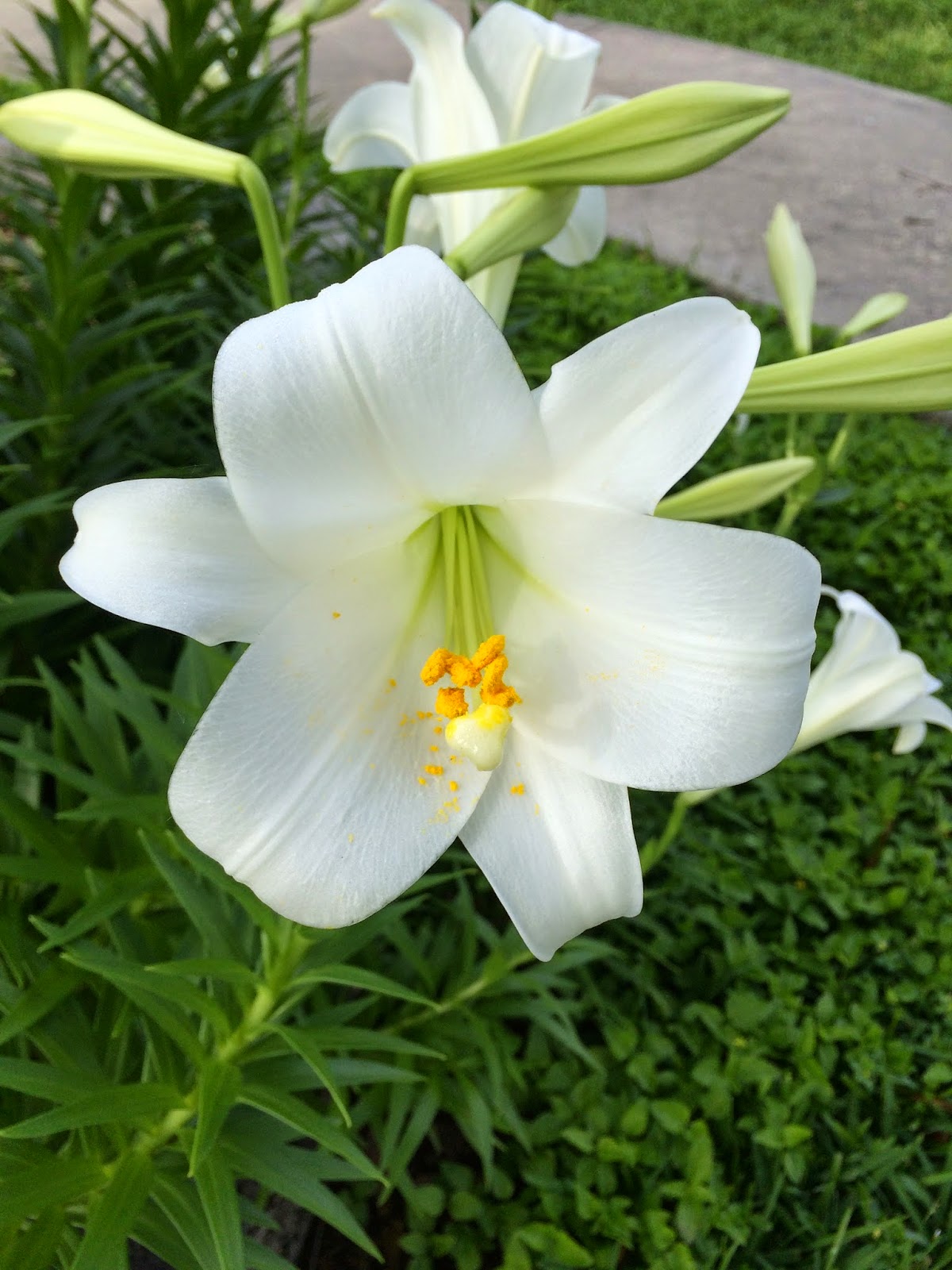 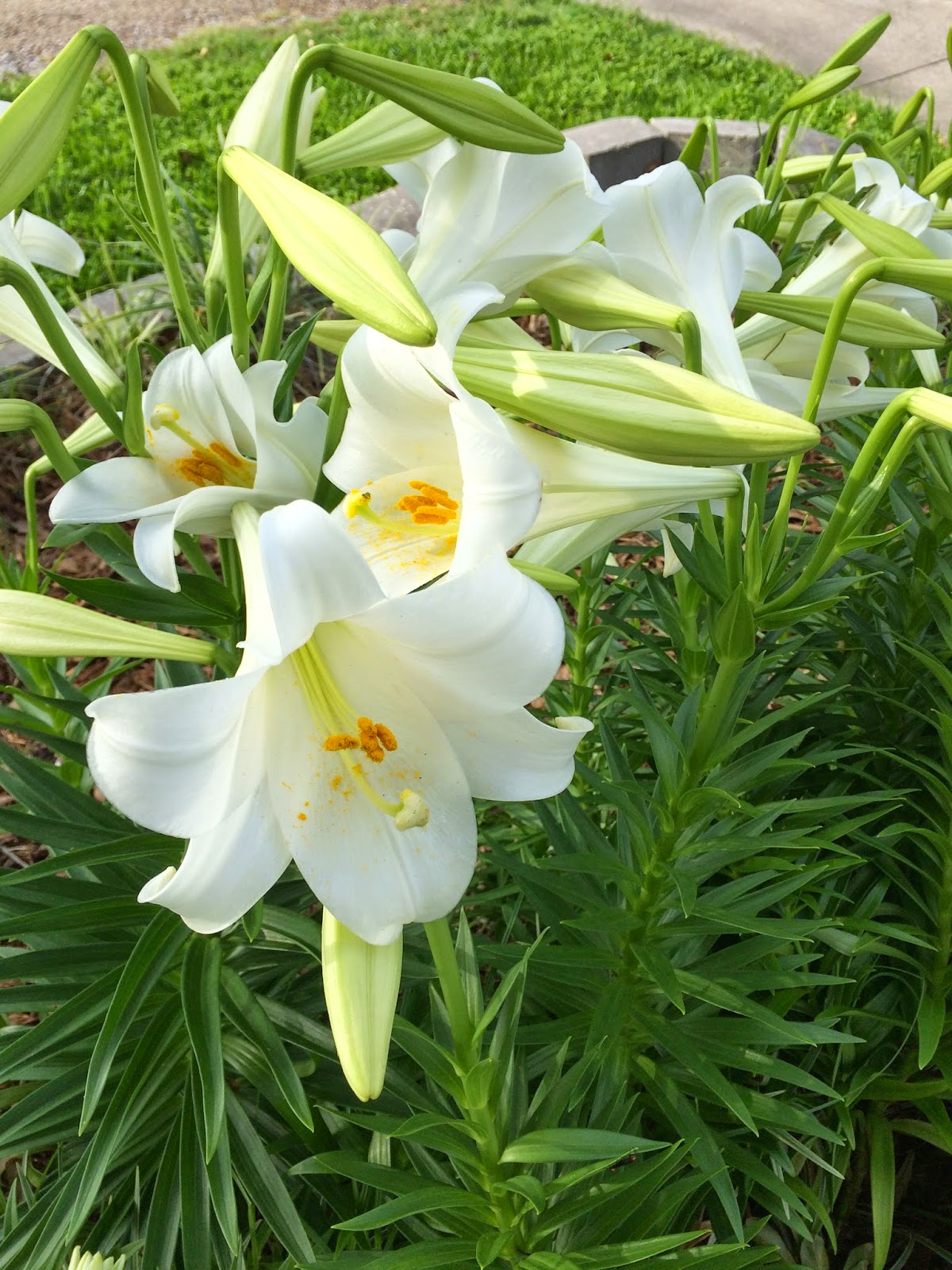 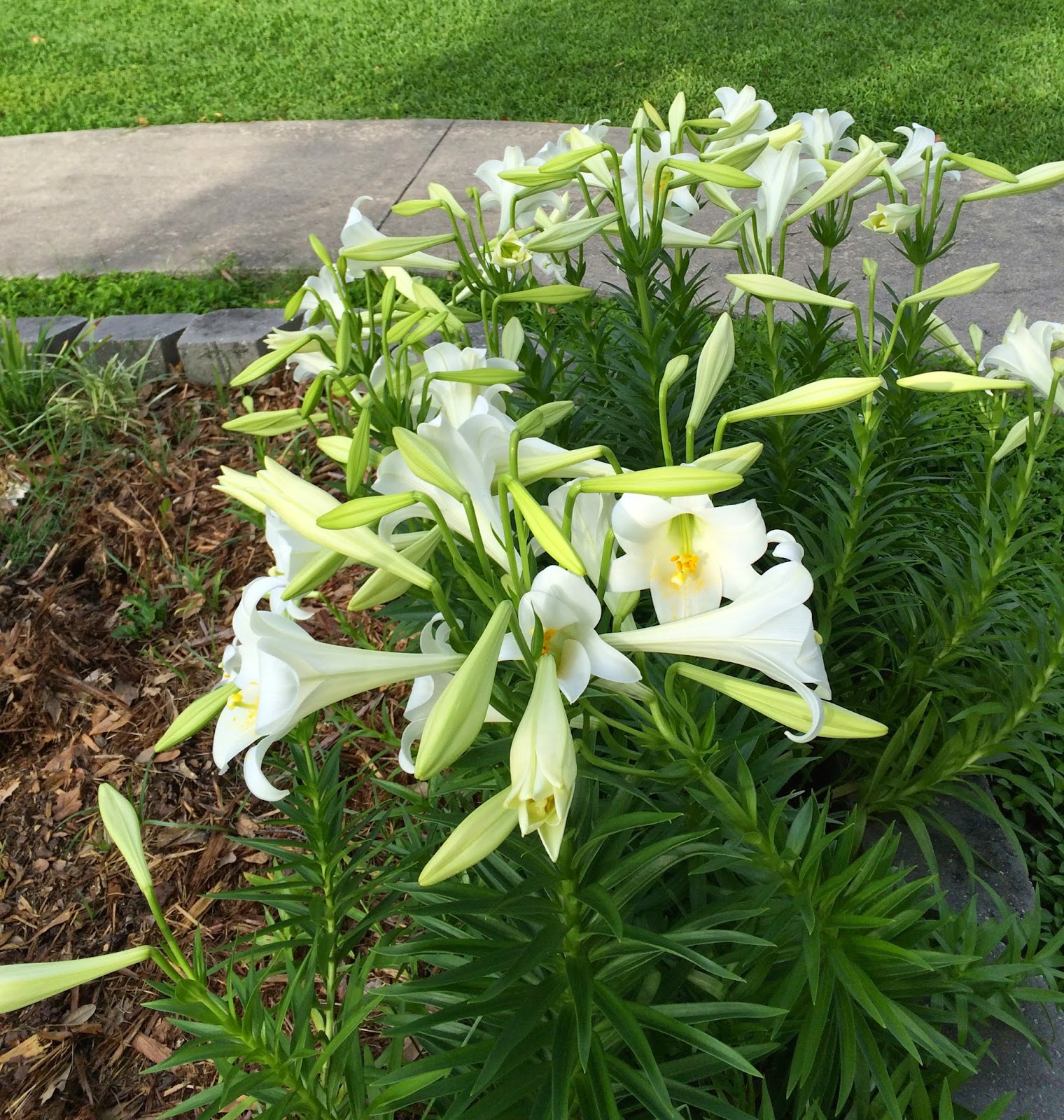 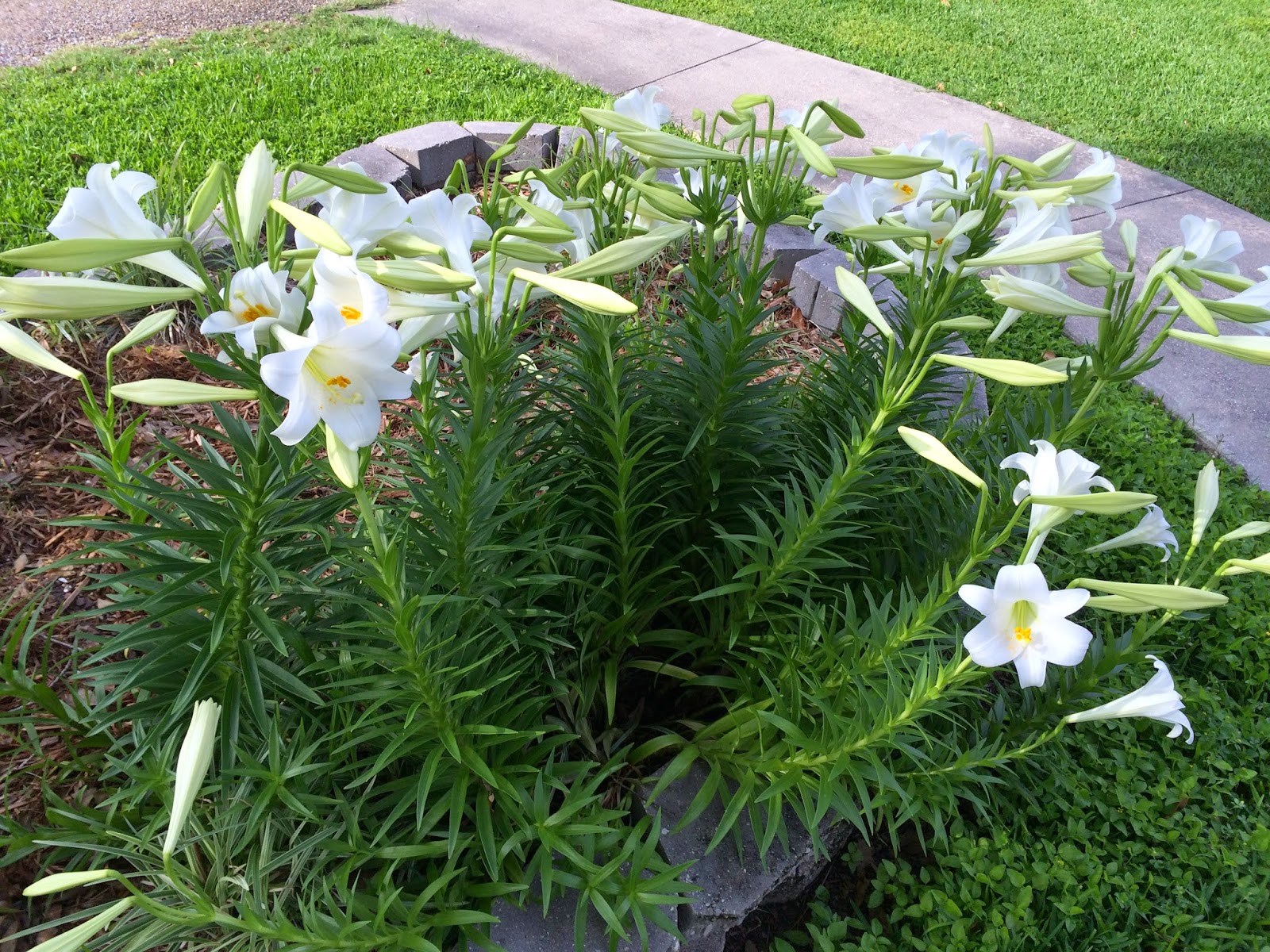 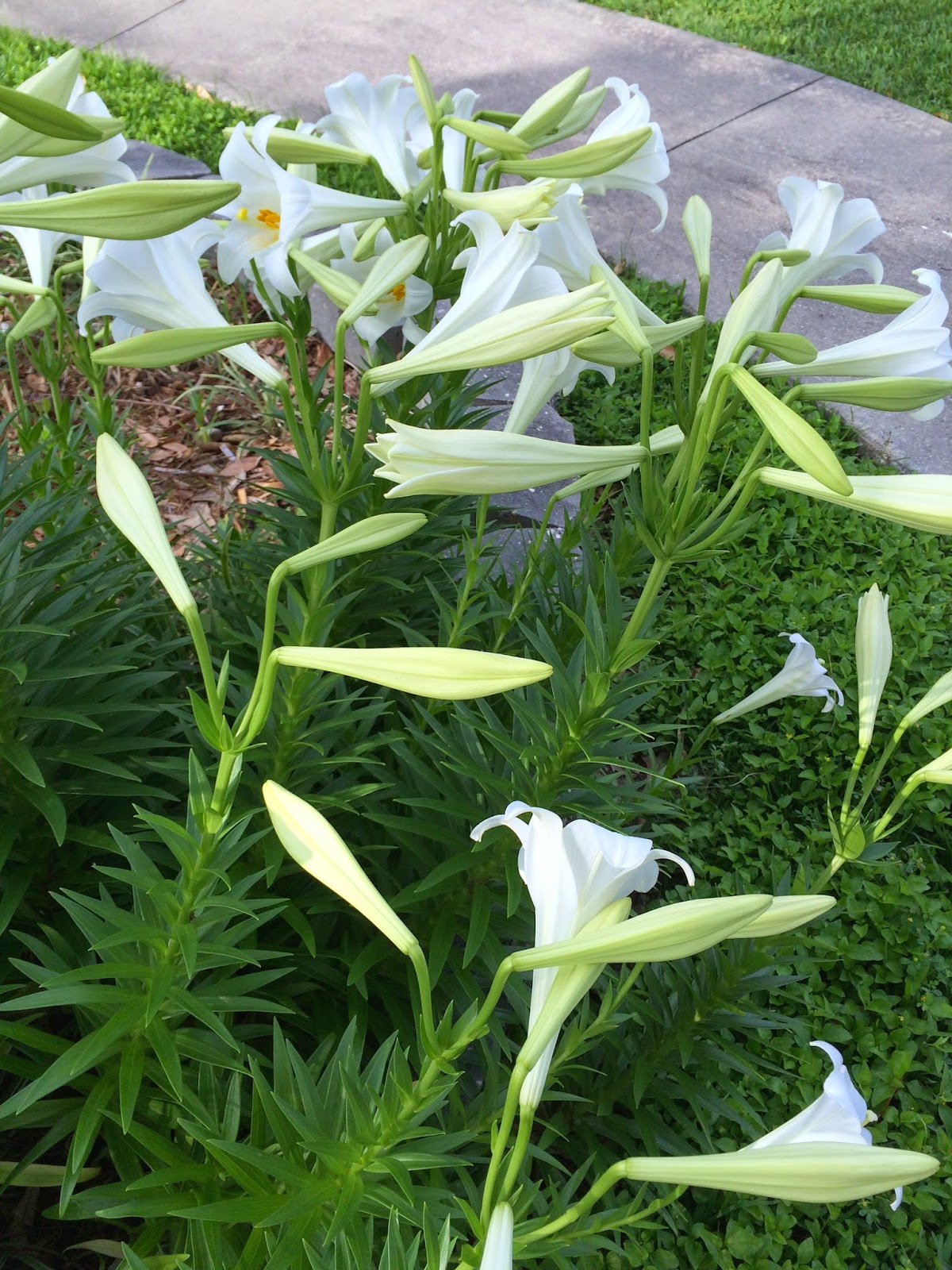 What a joy they are to see!

Posted by StitchinByTheLake at 3:20 PM 38 comments