A Summer of Sadness

I sit in my bedroom looking out on the beautiful lake just beyond our seawall.  There's a breeze blowing, not a cool one, but at least the air is stirring.  Flowers bloom, ducks paddle by, and birds light on my patio screen peeping in at me.  Inside my heart is breaking at the news of yet another senseless act of violence.

I remember well when the word murder was spoken so seldom that I was startled when I heard it.  Now it's not just one or two but 32, 49, 27 people.  Crazy numbers created by crazy people and shoved down the throats of those of us who abhor hate and violence in all forms.  People are killed because they are gay, or black, or wearing a blue uniform, or are too old to defend themselves, or are too young to know they should be at home in their beds, or because they are children sitting in a classroom or because they were in a mall at the wrong time.

And the violence isn't just physical, but verbal as well.  We hurl accusations at people because someone's speech writer didn't give credit to someone else's speech writer for words that have been spoken or thought by thousands of Americans before them, or maybe it's because their designer coat cost more than my first house and the opposition's dress cost less than my weekly grocery bill (and maybe we're just jealous because we don't have that beautiful coat or dress!), or because someone's e-mail was leaked as if any e-mail is ever safe from prying eyes.  The f word is used like it's everyday common language and it sickens my soul.  We hate each other, or act as if we do, because our political views are not the same, or our forefathers committed acts of atrocity that we never had a part in, or we grew up thinking one sin was worse than other sins, and other people's sins were somehow worse than our own.

When will we ever learn that love is the only answer to a world full of hurting people?  Can't I love you and you love me and can't we live in peace raising our children to do the same?  Can't you worship in your own way and even though I don't understand, can't I respect it and you?  And can't you do the same for me?  Can't we teach our children to respect all people, no matter their annual income or their gender or marital status or their religion or their address or their skin color or what kind of uniform they wear?

Recently my husband and I traveled through Germany, Slovakia, Hungary and Austria.  We've been to England and Ireland and Israel and Mexico and Canada.  And you know what?  Every country we've been in is filled with people just like me.  And just like you.  Men and women and children getting up in the morning, eating breakfast (and some not having breakfast to eat), going to work and school, kissing their children and hugging their wives or husbands, patting their grandmother's head, living their lives.  Just like me.  All of those countries...full of people, just like me.

I know, I know....there are sick people out there who commit unholy acts.  But those unholy acts start small.  They start when another kid in class bullies them, or when they aren't chosen for a job because of the color of their skin or because they couldn't afford to dress well for an interview, or when they're excluded from the "in crowd" or people who profess to love their neighbors look right through them and see only their "sin."  They start when their parents tell them they don't have to respect the principal or the teacher or the policeman.

Posted by StitchinByTheLake at 6:27 PM 43 comments 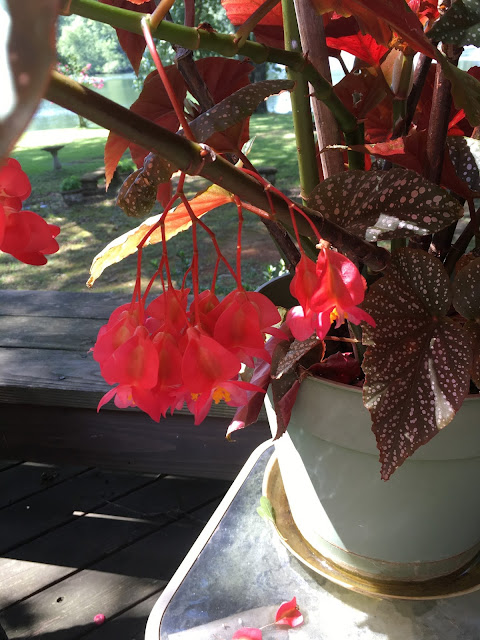 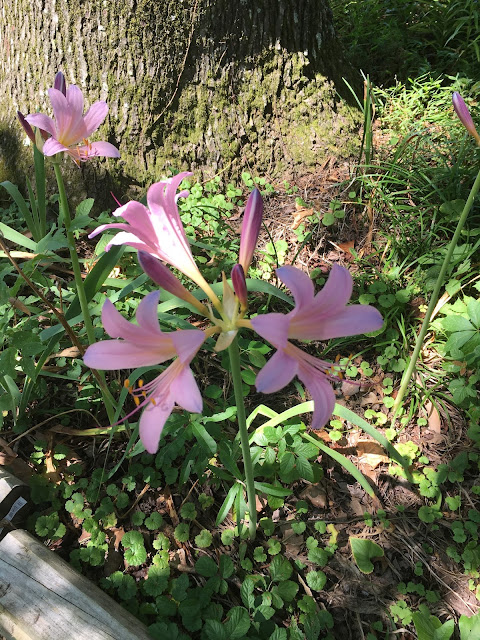 Some kind of day lily - not sure about this one! 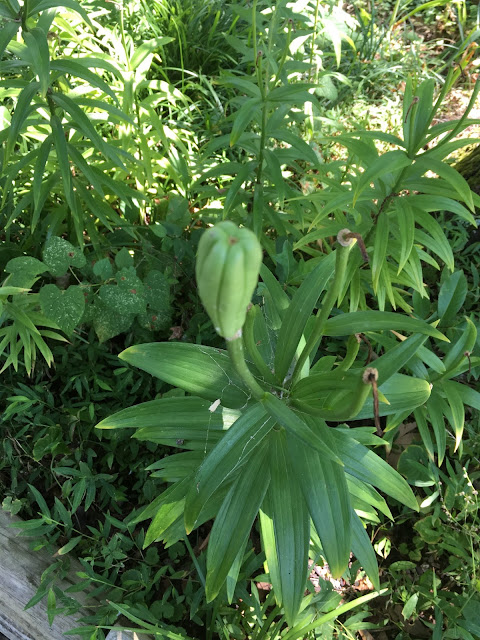 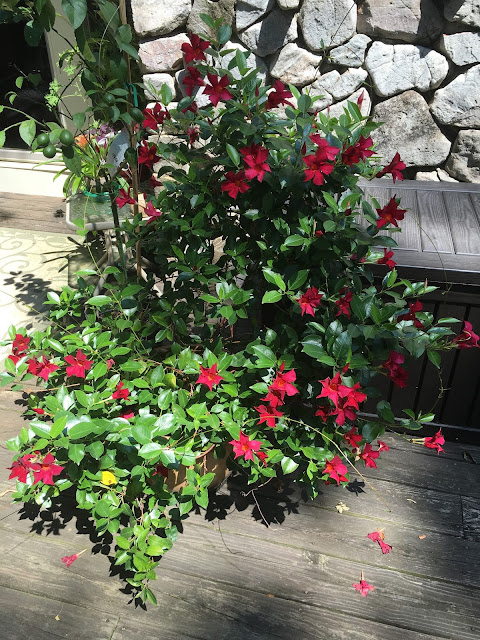 And even the herbs are loving this heat! 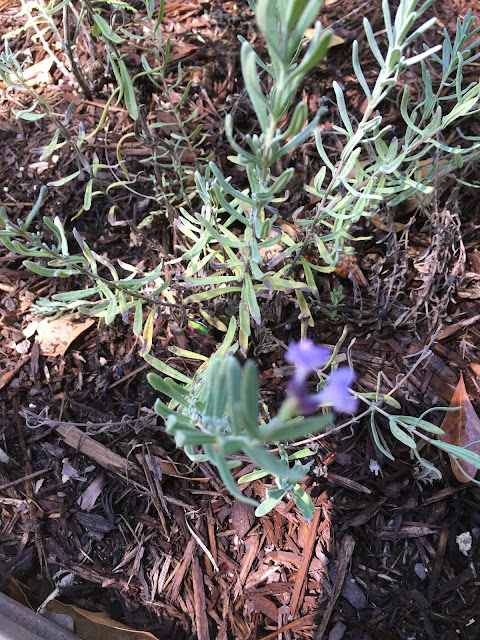 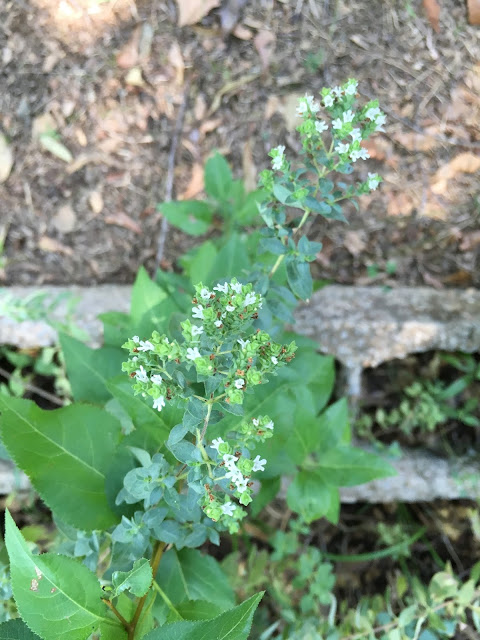 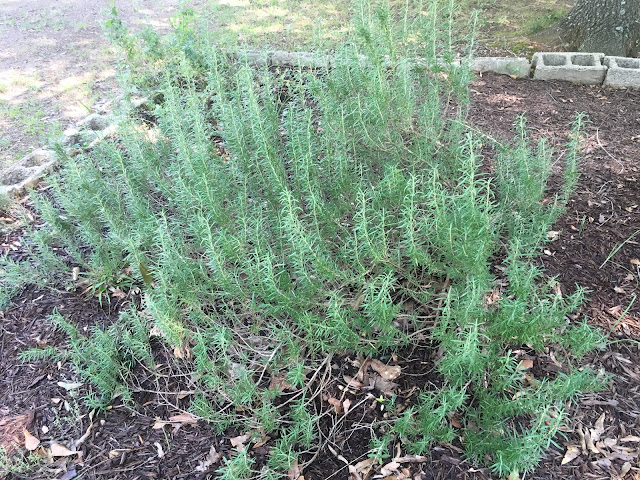 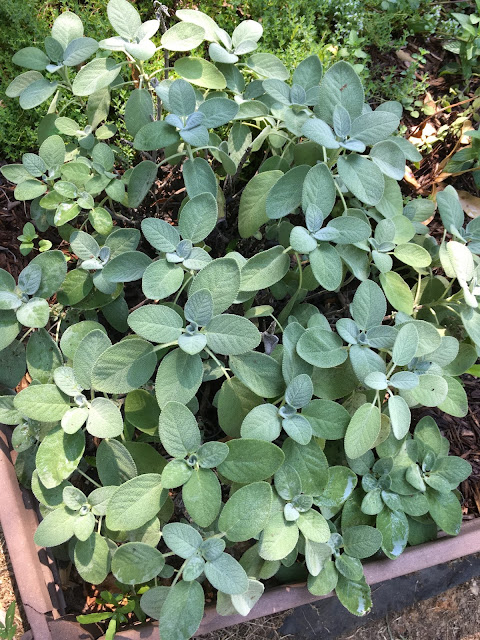 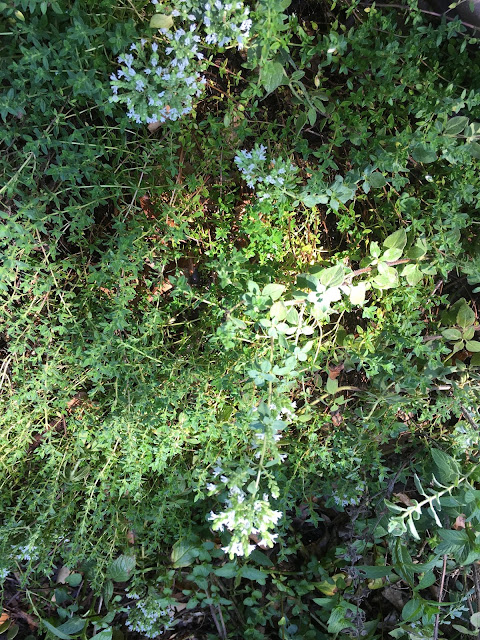 The lemons are growing quickly! 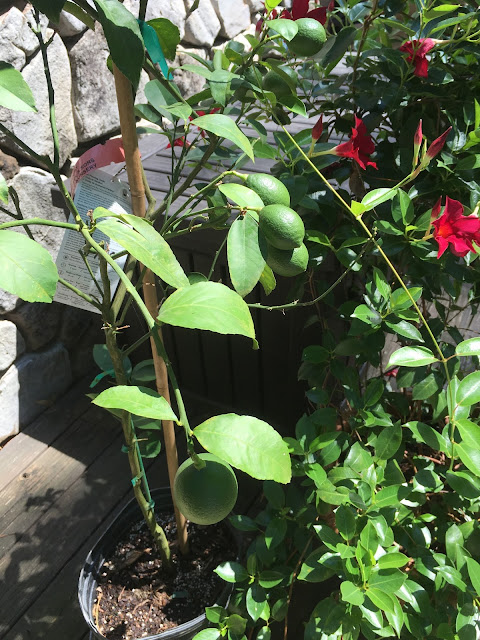 And Grandma's Rain Lily just keeps on and on blooming. 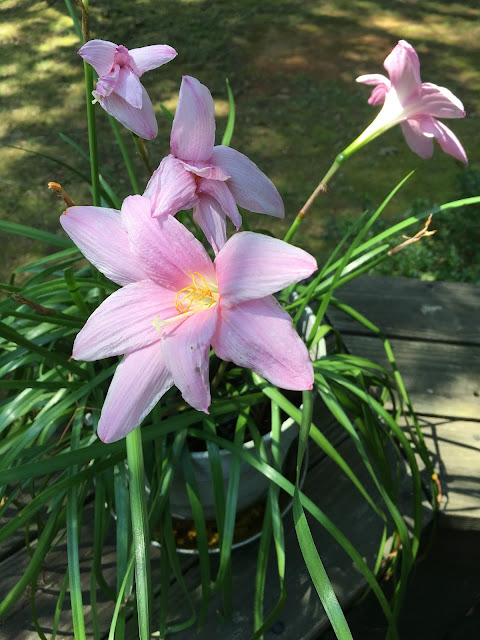 It's a hot, hot summer day in the south ya'll.  Time for a tall icy glass of sweet tea!

Posted by StitchinByTheLake at 11:36 AM 12 comments

It's so hot here during this time of year - well, I suppose the heat wouldn't be so bad if the humidity wasn't so high but it sure makes it hard to breathe when you're outside.  My poor husband is the one who does the watering of our plants and it takes a good hour so he comes in dripping wet, and not from the sprinklers! 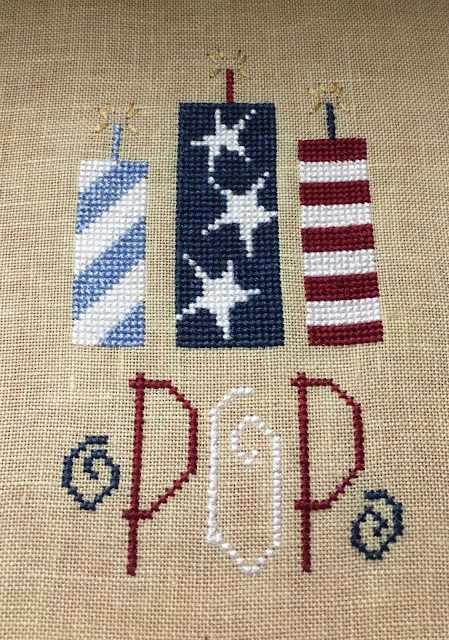 I'm not sure what I'll make this into - I have a ton of small pillows and a couple of patriotic door hangs so I'm looking for something different.  Any ideas?

I was in WalMart a couple of days ago and they had school supplies out and some already on sale!  They had the small notebooks, not spiral ones but the old fashioned kind with a paper binding, on sale for 50 cents so I bought four.  No thoughts except they were cheap and who doesn't love a new notebook.  I've made covers for two of them and will do the other two the first of the week. 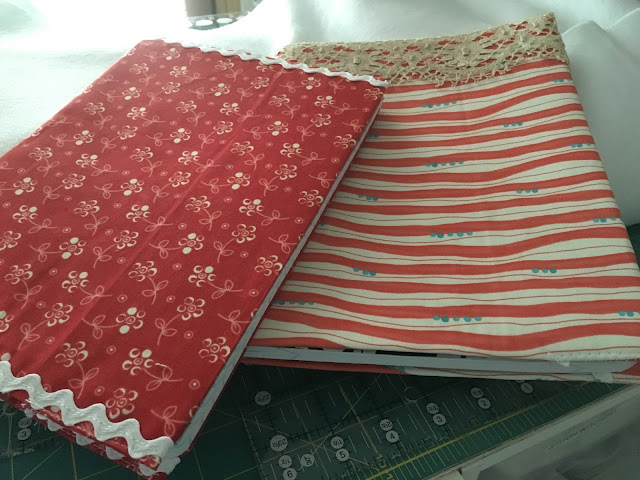 We went to the Farmer's Market Saturday and I picked up some tomatoes, okra and zucchini.  The tomatoes are so wonderful right now and the zucchini were beautiful.  Thankfully there are two or three organic farmers there so I feel pretty comfortable buying from them.  I made zucchini bread that was from a recipe I found on the internet and it was pretty good but I think next time I'll add a little crushed pineapple to it.  That sounds good to me.  I also tried a new recipe today for Zucchini Gummy Candy.  The verdict is out on that so I'll  let you know.  Just in case you want to try it here's how:
4 cups zucchini, cut in 1" squares (take the seeds out before cutting)  (I used 5 cups)
3 cups water
1 1/2 cups sugar or splenda
2 pkgs Kool Aid (no sugar added)
Boil the water, sugar and Kool Aid, add the zucchini and boil for 30 minutes.  Drain and put in dehydrator until the zucchini is leathery, not crisp.  It took about 12 hours for mine today, and it's a bit sticky.  I think since it's supposed to be candy it's not quite sweet enough.  Next time I'll up the sugar a little.

Posted by StitchinByTheLake at 10:10 PM 9 comments

More This and That

I forgot to tell you in my last post that my husband and I have been on vacation!  We aren't big travelers but we did something unusual for us and took a Danube River Cruise.  We began in Budapest on the AmaViola - what a beautiful city and what a beautiful boat.  This is my favorite picture from Budapest, taken on our night river excursion. 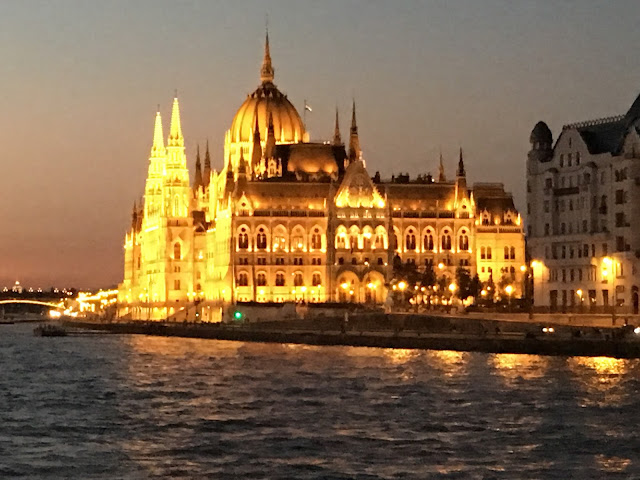 I believe this was their Parliament building though, to be honest, after a while the buildings began to blur on me.

My second favorite place was the Benedictine Monastery in Melk, Austria.  It was founded in 1089 and reminded me of Downton Abbey, only way, way bigger! 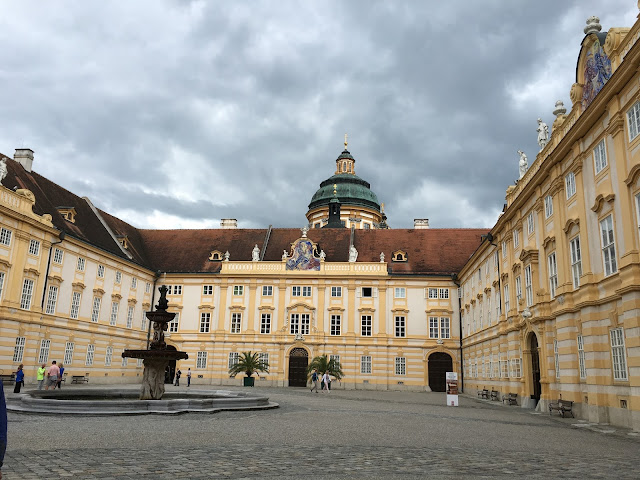 I believe they said one wing had 60 bedrooms - necessary because visiting dignitaries and royalty traveled with an entourage!

Another favorite place was Schonbrunn Palace, the summer residence of the Hapsburgs, who reigned in Austria for over 600 years.  Gold leaf was, apparently, quite popular among the royalty of that time!

I have no idea where this was taken - can't remember - but you can tell we were enjoying ourselves.  :)  My husband's faithful hat has traveled everywhere with him.  He isn't supposed to be in the sun and it was blazing hot that day. 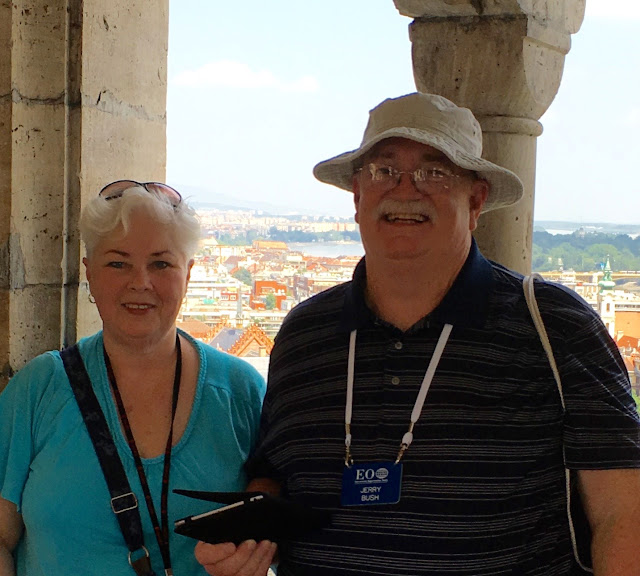 We cruised from Budapest up to near Munich.  Slovakia, a country I've seldom heard of, was quite beautiful, by the way.

When I got back home my flowers were blooming like crazy.  My vegetables could take a lesson from them! 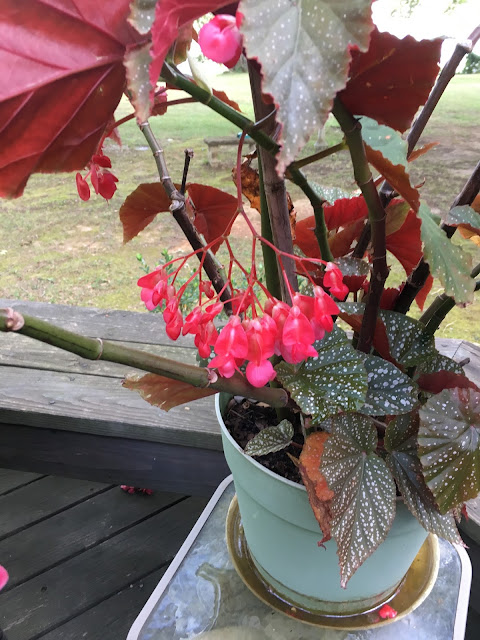 This angel wing begonia was given to me by a dear friend at least 20 years ago! 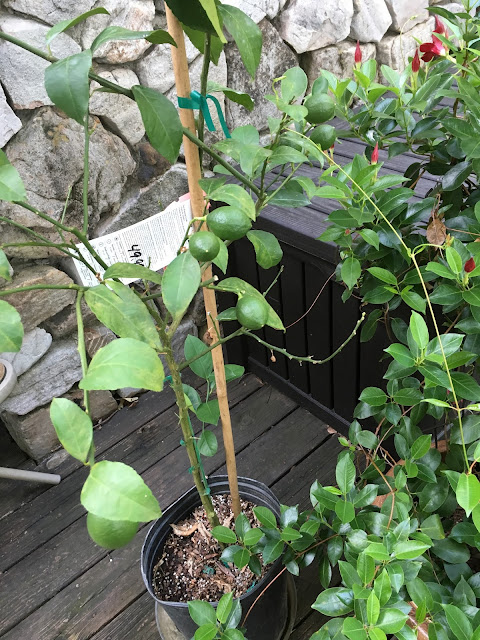 This lemon tree was a Mother's Day gift this year - I might actually get lemons from it! 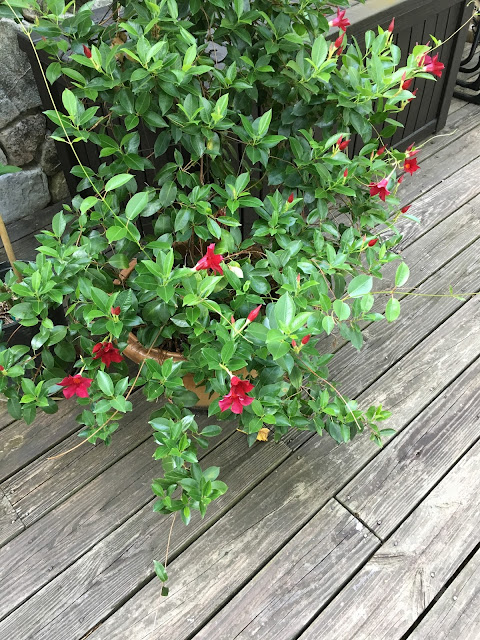 And this Mandevilla was a gift last year - we wintered it inside of course.

Since it's summer and other people's gardens are actually producing I'm still doing lots of this: 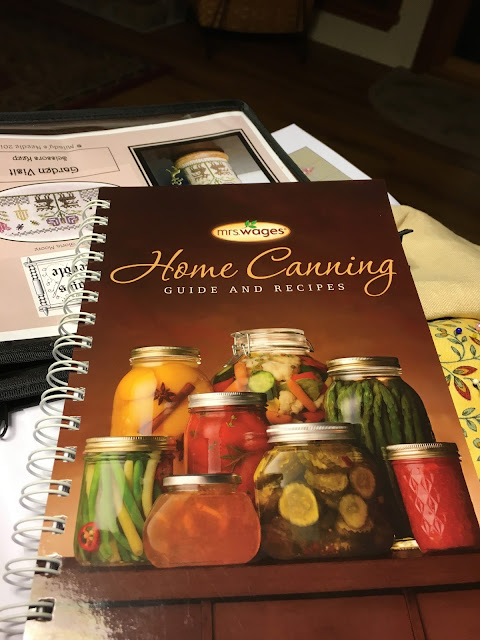 Posted by StitchinByTheLake at 10:03 PM 24 comments

This, That and The Other

It's been really hot here for the last two or three weeks, maybe longer.  And we've had no rain for a couple of weeks, so my "garden" hasn't done well.  We only have a few containers on our deck but the past couple of years they've done pretty well.  This year I planted 2 cucumber plants and I've harvested...get ready for it...one cucumber!  And it's pretty pitiful looking.  :)  This isn't it - I found this online - but it looks a lot like this. 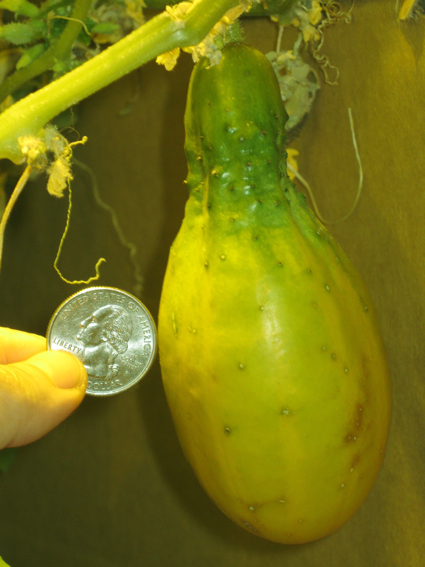 Hmmm...two cucumber plants cost about $7 so it's a pretty expensive cucumber!

I also planted two squash plants and I've gotten three squash, but it does have a few babies so maybe there will be more.

But the tomatoes are looking good and my herbs are growing and growing and growing.  I've harvested and dehydrated big batches of basil, cilantro, thyme, and stevia.  I have several others that I'll be storing pretty soon - oregano, mint, rosemary, lemon balm.

I've gotten some finishing done on a few cross stitch pieces and I'm adding to my little pillow collection these two: 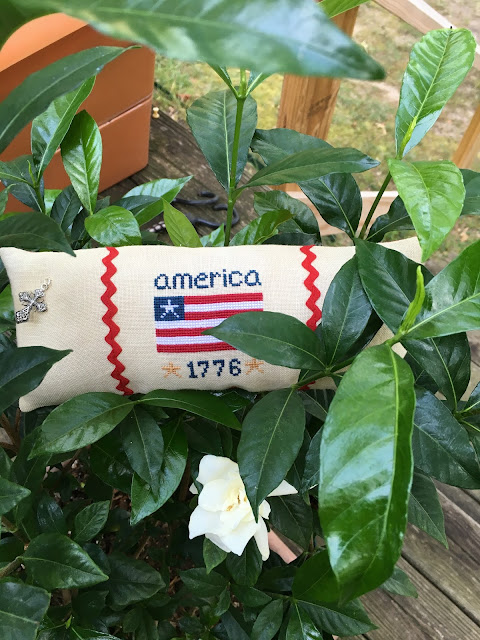 And another patriotic piece I did as a door hanger... 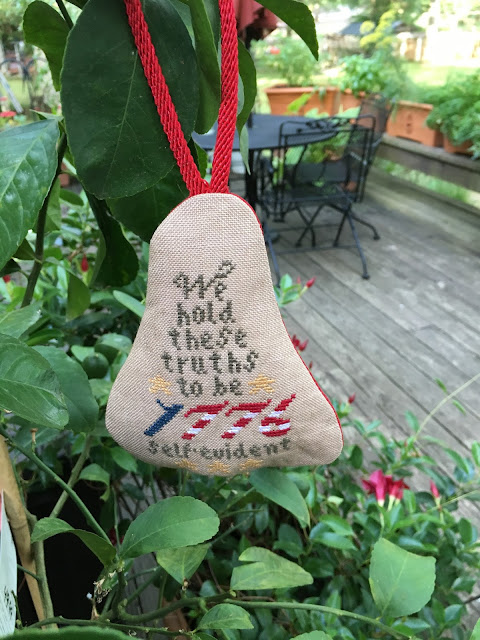 I apologize that I don't have the designers to tell you - I've reorganized my patterns and wouldn't you know, can't remember right now where I put the already-stitched ones!  :)  However, I can tell you that the following spool is by Milady's Needle. 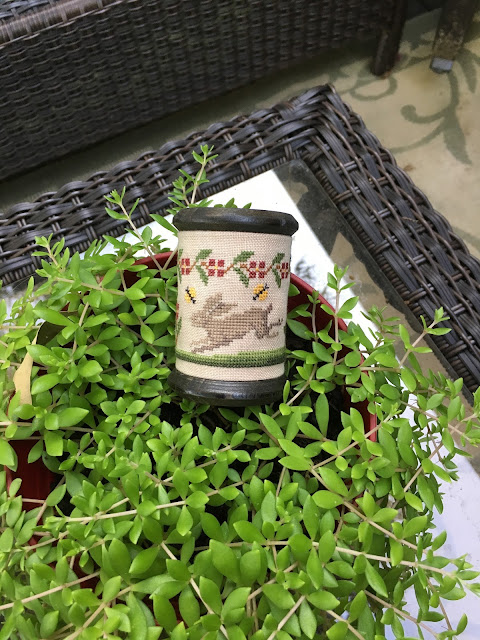 The pattern shows a small pincushion on the top but I'd rather use it as a scissors keep so I'm leaving it plain.  I have one other of her patterns that goes on a spool too so I'm anxious to get it stitched up.

I'd like to add a small rusty jingle-type bell to the bottom of the 1776 piece but I can't find one.  I read somewhere that Hobby Lobby has them but I've looked there and can't find any.  Anyone know where I can find them?

I have some other things to tell you but I'll be back in a few days to do that....it's my bedtime!

Posted by StitchinByTheLake at 9:37 PM 14 comments