Thoughts From The Back Of An Ambulance

It started a week ago Friday, the day before Halloween, with a scratchy throat.  I ignored it because I had company coming for the weekend and really, isn't that what we women do?  On Saturday it was about the same but by Sunday afternoon I knew I had caught a cold.  And answer me this...why do we call it "catching" a cold, as if we'd been chasing it and finally, finally we caught it?  I, for one, avoid colds like the plague.  I wash my hands a lot, I use hand sanitizer, I wipe the handles of the carts at WalMart with their bleach wipes, I take Vitamin C.  But still, there it was.

It wasn't too bad, just a cough and stopped up sinuses, and so I continued on my merry way.  I went to Yoga on Sunday, Weight Watchers on Monday and Yoga again on Tuesday.  Where I got light headed and broke into a sweat.  Strange since I'm always cold and never hot.  Wednesday the cough was worse so about 6 that evening I put on my pajamas and settled in with my stitching.  And I coughed and coughed and coughed.  For hours.  Which triggered esophageal spasms that were so bad I couldn't get my breath.  Finally my husband got scared and called 911.  Well, to be honest it was me who got scared and told him to call 911.  :)

The First Responder from the Fire Department arrived pretty quickly.  He was such a sweet 13 year old.  I remember thinking that .... 13 years old and I wonder if he was one of my students.  Of course, the problem is that at my age everyone looks like a 13 year old.  I'm sure he was much older, maybe even 25.  He put oxygen on me and took my blood pressure.  Correction - he tried to take my blood pressure.  It was so high that it wouldn't register.  The ambulance arrived next and started asking questions.  Try the blood pressure again.  190/88.  I'm pretty sure I told them to try again because my blood pressure is really 120/60.  Always.

I thought they would just give me a shot, calm me down, and head on back to the ambulance home while I went to bed.  No they said.  Can you help us get you on the gurney they said.  Young man I've been getting myself up and around for 69 years and I'm not gonna stop now.  On the gurney, up into the ambulance.  Did you know that the lights inside the ambulance stay on while they drive?  And it's dark outside so everyone on the street can see you in there?  They put the EKG machine on me, trying very hard to keep me covered up.  For which I will be eternally grateful.  I would have hated riding down the highway with the girls showing.  The nice EMT tried to draw blood and tried to get an IV started.  I have the proof that he tried - several black bruises on my arm.  I offered to pray for his blood drawing skills.  I think that probably wasn't politically correct but it was definitely appropriate.

Did you know that from the back of an ambulance cars behind you look like giant eyes following you?  And that riding backwards like that gives a whole different perspective to travel?  Instead of looking where you're going you're looking at where you've been.  Think about that for a while.  We passed the Shoe Factory...I bought a really comfortable pair of shoes there once.  And there's the place where I used to get my oil changed when I had the car that the eighteen wheeler crushed.  Oh yea, that used to be the neighborhood market but it closed and I really miss it.  Looking back is ok but trust me, looking forward is much more uplifting and positive.

Don't worry, this story has a happy ending.  I got shots and meds and more oxygen and finally got back home about 3 a.m.  It's days later and I'm almost well.  In fact, if the weather weren't so awful today I'd have gone walking today. 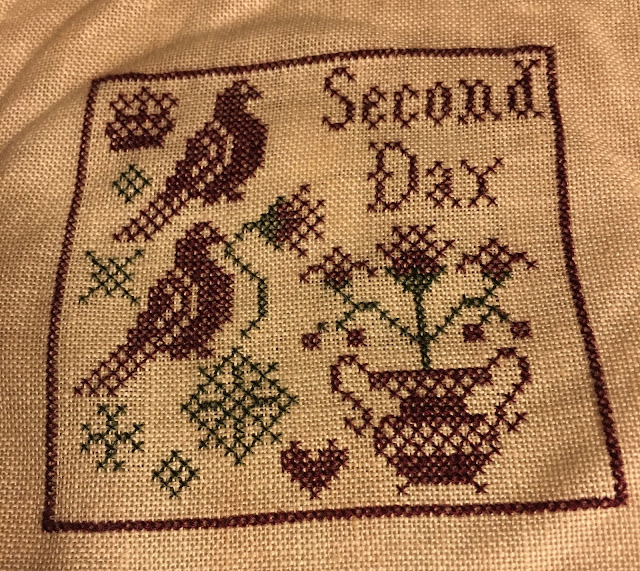 Or maybe there's one picture - I'll take the other pictures in a day or two.  These are from Plum Street Samplers and are her free patterns for her Sunday Sampler series.  You should check them out because they're so cute and so fast and fun.

Meanwhile I'll be back in a few days to show you how I'm finishing them.  I haven't actually decided yet how I want to finish them but I'll be sure and show you.  :)  Any suggestions?

Posted by StitchinByTheLake at 5:12 PM 53 comments

Well last time I posted I mentioned the drought and I have to say that's over.  Completely over.  We've had rain and more rain and there's more rain coming.  They days have all been gray and cloudy and damp and perfect for staying in and stitching.

We've had siding installers here for weeks - the 4 day installation of siding on our house has taken a month and they're not finished.  We have a brick house so there's not a lot of wood area to cover but it's been a comedy of errors.  Materials didn't come in or they came in damaged.  Where I asked for it to be put on horizontally they put it vertically.  The list goes on but I have high hopes that all mistakes will be corrected by tomorrow and the job will be finished.

Meanwhile I've done a little stitching and had my high school friends here for the weekend and started yoga again.

I did this quick embroidery but then couldn't decide how to finish it.... 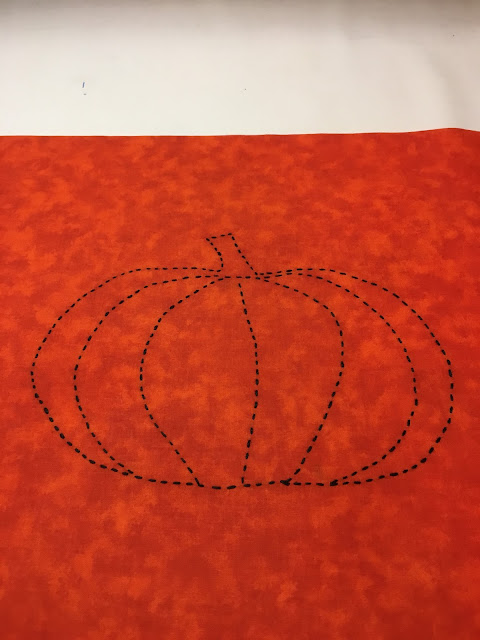 I love big stitch embroidery - it's very easy, suits my primitive style and is oh so fast. 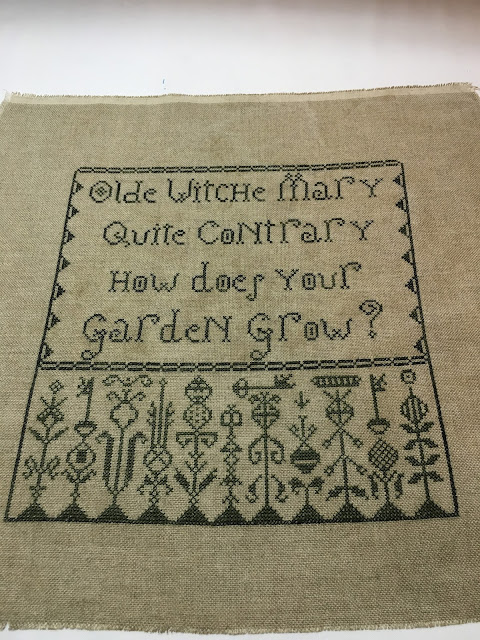 Olde Witche Mary - has to be one of my favorites despite the many mistakes I made doing it.  I ran out of thread very early on and had to substitute.  This was a kit from Not Forgotten Farms and the thread was hand dyed.  There was plenty for the top half but not the flowers so I found a Presencia thread that was very, very close.  Somehow I miscounted and ended up altering a couple of the flowers to make them fit but if I don't tell you which ones I don't think you'll be able to tell.  :) 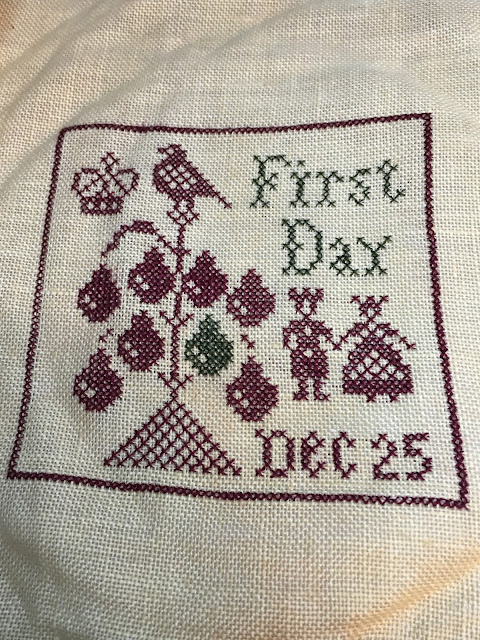 And I'm working on the Plum Street Samplers "Sunday Sampler" series - and yes, I'm way behind.  This is the First Day of Christmas...I've begun the Second Day but I think there are about six of them out now.  I have no idea how I'm going to finish the first two pieces but these will be ornaments when I get all the stitching done and get them finished.

I made a trip to Goodwill the other day to drop some stuff off so I shopped a little.  I'm always on the lookout for ways to use my cross stitch pieces.  I ran across a wonderful round green box for $2 that is going to be perfect for something....have no idea what, but something!  :)

I've got a hot cup of tea beside me, bread dough rising in the kitchen, and stitching in my lap.  Life doesn't get any better than this!

Posted by StitchinByTheLake at 3:57 PM 25 comments