It's rained here for a couple of days - gray, heavy skies with a heavy mist sometimes interlaced with bursts of heavy drops.  It's 2 degrees above freezing and the temperature is supposed to drop later this evening so we could get freezing rain, sleet, and/or snow.  The county I live in is right on the line of the front so there's no way to really predict the outcome.  I've gotten out candles, oil lamps and flashlights; my grandson brought in some wood and laid a fire in the wood stove and my son-in-law moved the furniture around so I can easily use the gas fireplace as well.  My philosophy is that if I'm prepared it won't happen.  It's only when I'm caught unaware that the power goes out.  Tell me I'm right.  Please.

I'm still a bit incapacitated with this round of sciatica.  I'm mostly sitting in a recliner because that seems to be the most comfortable place.  Because of the medications I've been on for nearly a month I'm frequently really, really tired but in the occasional bursts of energy I'm still working on some hand stitching - mostly finishing some things I've had either traced off to embroider or some wool pieces waiting to be appliqued.  This is a wool Valentine piece that came from Primitive Quilts and Projects magazine...

The original piece has some tiny flowers embroidered around the outside of the big heart but I chose not to do that on my version of it.  The background fabric is wool but looks like suede - the color is really just a bit darker than this picture shows.

A couple of days ago I was trying to decide on something for lunch on one of these rainy days and pulled out this jar of tomatoes canned this summer. 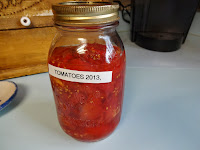 I sauteed some onions and garlic in a little butter, then put a tablespoon or so of flour in and browned it, added the tomatoes after putting them in the blender for just a few seconds, and then mixed in some half and half.  I've never made homemade tomato soup before but oh my, it was good.

We have another round of the So She Sews Blog Hop coming up tomorrow.  You won't want to miss these bloggers - I know they're going to be showing us some wonderful things. 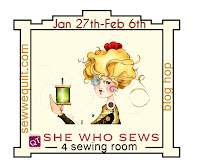 Posted by StitchinByTheLake at 3:20 PM

Oh I so hate to hear of anyone having that sciatica stuff. My Mom suffered so with it until she had surgery. Hopefully she is fixed. Hard tough surgery though. Then my Mother in Love suffered with it until we found some pain relief. Hope you feel better! Your tomato soup sounds just wonderful. I am trying to get back in to the blog world. I sure need it!!!

We woke to rain on Sunday too. The groundhog would have had to oversleep to wake to his shadow ... but then, no groundhogs here anyway. Sweet little piece of work. Looks like you are ready for February.

I hope that at least being prepared will lessen any impact the weather may have you. I love that Valentine project!

So sorry you're still down with sciatica; wishing you a speedy return to good health. Your wool applique is just lovely!

I love your wool Valentines project. It is gorgeous. Hope you can soon get over the Siatica. I once had a bout with that many years ago. I can honestly say I know it is a major pain

The project is perfect for a cold January Day....I went to Joannes to pick up white muslin to finish my sashing on the Granny Square Quilt (love it)...and while there a couple was at the cutting table, just giggles and laughter..it made me feel goo (I had been in for 2 weeks quilting mostly due to the snows and blizzards that seem to keep coming this winter)...and she was making PJ's bottoms for her "older" hub....it had become a gathering of teasing....I was in line, not at all upset to wait, and the wife apologized for taking so long....No, I said, I was just remembering making my Dad a pair of PJ bottoms when I was 7 and so proud as he held them up on Christmas Morning (have the pic)...and I had forgotten to make any "opening"....the a lady shared that she had made flannel boxers for the men in her family this year and she had left pins in one set.....so! that was our cheering section at Joannes today....we all admitted that we had been in TOOO long this winter....I thought that would make you smile.....we will all be sharing our first Spring Flower "I Spys" this year!!.....God Bless and may you heal very soon!!..... have a sweet blog hop type of week!

Lovely wool project. Feel better, and best to be prepared.

I love your project, it's beautiful! I am amazed you can get anything done at all right now.

Oh, I do like your wool heart piece. I hope you soon feel better.

I so hope you get better soon! That can get a girl down!

Keep warm, hopefully with power. I know you probably heard but we are due for another storm Tuesday/Wednesday 3-6 inches!

Richard Wesley said...
This comment has been removed by a blog administrator.
February 3, 2014 at 3:26 AM

When my sciatica acts up I find some yoga poses REALLY help! Nothing nuts (I'm not that flexible! LOL) I find that Child's Pose, and Cat and Cow Pose really help stretch and loosen up back there! GO SLOW! Do not over do it! I also lie flat and bend my legs and let them 'fall' to one side and then the other. Try it! I hope you feel better!

I hear ya sista! Stay warm, feet up, meds down and stitch that wool!

Oh I so love your little valentine quilt! It's perfect just the way it is :) Sorry to hear of the sciatica - my mom has trouble with that occasionally, and I think it is what bothers me when I use my friend's longarm. Hope you feel better very soon!

What a sweet Valentine quilt! I bet that tomato soup was so fabulous! Nothing like fresh ingredients. So awesome! Hope you will be much better soon girlfriend. Hugs!

So sorry to read you have been in so much pain. I hope you will be back to your normal, cheerful, productive self soon.