One Down, Three To Go

We've been here at UMCO Sager Brown for one month. The time has flown by for us and we're still having a joy filled time. I'm way busier than I thought I would be but that's not a bad thing. We've met some wonderful people and had some "God moments" that tell us He knows we're here, He knows we're trying to do what He asked us to do, and He knows that we're still plugging along. A lot of life is one day at a time and this kind of is too. When you're new at something there's a big learning curve but we're beginning to master it. "Plugging along" sounds as if it's drudgery and it's far from that. It's both fun and inspiring. But part of following God's commands is also plugging along, making the right decision when faced with a choice, and doing that one decision at a time. This week we have two 40 foot containers, each holding 31,000 Health Kits, going to a country called Krgystan (it has a couple of different spellings but this is close). That means that even though it can easily get a bit boring volunteers have to keep on putting those kits together one tube of toothpaste at a time, one comb at a time, one bar of soap at a time. Small steps to a large goal! I read something this week that made me think this: What Happens at Sager Brown Doesn't Stay at Sager Brown. What we do here goes all over the world. Just like What Happened at Jerusalem Didn't Stay in Jerusalem. Don't you love that? No disrespect to Las Vegas intended. :)

I did a little sewing this weekend - got my machine out for the first time since we arrived. I made this table runner (super simple!), sandwiched it, and then realized that the machine I brought with me simply won't do free motion quilting. I guess I could do some straight line quilting, and maybe I will, but for now I put it aside. 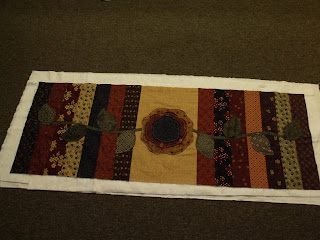 And I made this throw pillow from the redwork I finished last week. If you remember the pictures I posted about this apartment you know that it's very nice, perfectly adequate. But it's bland....white, khaki, gray. I need color. It doesn't have to be bright, but it does have to be color. So I added a few little things this weekend, like this pillow on my chair. 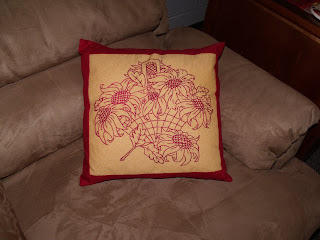 When we got here the kitchen looked like this. 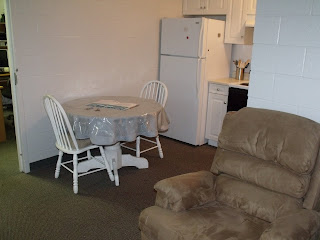 I added placemats, cushions, a throw rug in front of the sink, a dish towel, and a red spatula by the stove. :) Instant color! 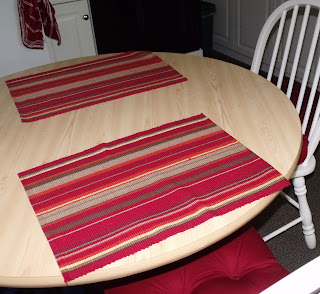 It only takes a little to make me smile. :)

Posted by StitchinByTheLake at 12:44 PM

It really helps to make a place feel a little warmer and cozier doesn't it? Love the read and the table runner. Glad your stay is going well so far. I think of you often. At one point we thought we might make a trip to NOLA this summer and if we would have, I was hoping to look you up but now it doesn't look like we'll go until October if we go then. When do you come home?

I loved this sentence... "and had some "God moments" that tell us He knows we're here".

Praying you'll continue to experience HIM in every way while you're there.

So nice to hear about what you are doing..Sounds so giving and worthwhile.Glad you got to stitch some just to keep the body sane? lol.. We know that what you are doing is having a tremendous impact on so many countries.Thanks for that, there will be many jewels in your crown.
Hugs
Maggey

You said, "Just like What Happened at Jerusalem Didn't Stay in Jerusalem." I love, love, love this.

Love your touches of red. A real picker upper! Color is good for the soul.

How many times you've been on my mind. I have thought of you and your husband, and I am humbled by the work you and he are doing. The depth of your compassion and kindness is heartwarming, and what you are doing reflects on all of us as capable of being other than war-like . Kyrghystan needs this kind of outreach rather than being the host of the U. S. Military as a staging area for leaping over into Afghanistan. Thank you for all you are doing. Take care in this heat! I believe we have moved to Haides!

It looks like you've done a great job of making this space cozy and warm. You amaze me with all you do, and I know God is smiling down on you and I am so happy we have blogs so I can see and hear about people like you! Hugs!!

Love how your red makes your cozy little place POP.
It sounds like you all are having a great time.

That's so wonderful! Thanks for a great update!

I am so impressed with the wonderful work you are doing. Thanks for the update letting us tag along.
Love the personal touches, they really make a difference.

Hi Miss Marlene! I just love your new table runner! You are just so talented! Glad everything is going so well!

Dear Marlene,
You are so sweet. It only takes a little to make you smile and you always make me smile. I love the color you have added to your mission life and I love the work you are doing to serve others and serve the Lord.
Keep up the work dear friend. One down and three to go.
Hugs, Lura

Makes ALL the difference!

That place sounds amazing! What a great work you are doing! I love your little touches of color. Men seem to be happy anywhere, but I think women need a little color to enrich our lives. :)

"Part of following God's commands is also plugging along, making the right decision when faced with a choice, and doing that one decision at a time."

I needed to hear that, thanks.

Also enjoyed how you added some color to your home away from home.

Its fun to put your own touch on things. I am sure you feel more at home now. Keep up the good work, even if it is just one tube of toothpaste at a time. You are all wonderful.

Don't you love those "God moments?" What a wonderful thing you are doing. How nice that you are adding touches of home with color. Your pillow is so pretty.

Its always nice to add little touches that make it feel like home. The pillow and quilt look great.

Love your work...crafty and otherwise.
Thanks for visiting my blog. I am now a follower of yours.

I see you have been very busy since I lasted visited. Your applique quilt is stunning. And the little touches around your apartment are sweet.